This week marks the second week of future state titles, with last week’s standout definitely being the new Wonder Woman. Yara’s introduction was a highlight amidst a bag of mixed Future State titles. This week opens new questions but also, finally, gives us some answers. One of the biggest questions thus far revolved around Bruce Wayne. Where was he? What was he doing? Future State: Dark Detective #1 aims to answer some of those questions – kind of. This issue also catches us up with Grifter and what he’s up to. Before we dive any further into this issue be warned that this review will contain spoilers. If you’re fine with that, then read on! 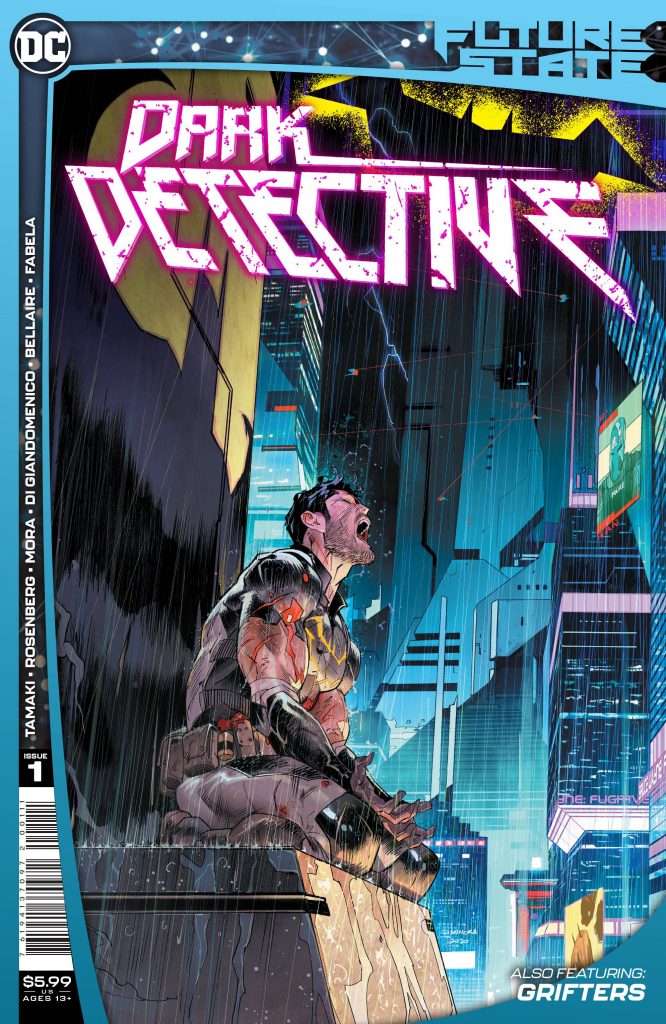 So, Dark Detective, the main story anyway, finally fills us in on what’s going on with Bruce. Short answer: he’s dead. Now, obviously, he’s not actually dead but that’s what Gotham city believes. If that wasn’t bad enough they don’t just believe that Batman is dead, Bruce Wayne is declared dead as well. Our time with Bruce is, unfortunately, rather short. Only half the issue is devoted to catching us up with Mr. Wayne and it, sadly, shows. This story feels unfinished like it needed more pages. We are basically given the information that Bruce is alive and that he is going to fight the Magistrate. Then we’re left with, essentially, a ‘to be continued’. It’s disappointing that there’s not more to this issue than that. I suppose we learn his technology helped lead the magistrate to power but that is hardly surprising.

It had some good ideas too. It’s always fun to see Batman pushed to his limits, and boy is Bruce Wayne ever pushed in this future. He is literally on the run, he spends most of this issue running. He’s forced to rely on shady doctors to patch him up, his list of allies is slim. It’s unknown if the bat family believes him to be dead but he hasn’t turned to them for help yet.

I will say that the art in this issue was really good though. Gotham comes alive behind the rain falling down and the action sequences with Bruce are rather exciting. His future state costume is pretty awesome as well! I want to know more about Peacekeeper-01 though, since I have a sneaking suspicion we might know who is under that mask. If we hadn’t gotten Next Batman #1 last week this issue would have been a lot more successful in my opinion. The issue is that Future State: Dark Detective #1 is used mostly to establish the state of Gotham city. We already had a book do that last week.

The backup issue is a little harder for me to gauge my feelings about. About half of Future State: Dark Detective is dedicated to the Grifter and Luke Fox. Both end up captured and have to work together to escape. This is a duo that we don’t see together very often – or ever – so at the very least it’s interesting. Grifter isn’t someone I know very much about so I was pleased to learn a little about him. This story looks like it’s going to focus on getting Luke Fox out of the city. The best part though? It brings the Huntress into the fold, and she’s going by the Queen of Clubs these days. Has Huntress become a criminal, or is there more to the story? We’ll have to wait until the next issue to find out.