We are in the final days before the Belle Reve opens its cell doors and releases the best of the worst that DC Comics has to offer us! The world will finally get the opportunity to have an informed judgment on Leto’s method acting madness. After an extended break from acting Leto got back in front of the cameras for his Oscar winning performance in Dallas Buyers Club. That performance along with his music career made David Ayer think Leto could become the clown prince of crime, “I think you have to have a little bit of madness to take on something like this,” Ayer says. “And his showmanship, knowing how to control a crowd, seemed like an interesting skill set to bring into the Joker.”

When Leto was considering the roll he thought about more than the delivery of live rats and used condoms to co stars, he had to consider what taking the roll would mean to fans of the Joker. In an interview with Rolling Stone he talked about Heath Ledgers performance and how he got into the roll of one of the most notorious bad guys in entertainment history. “Heath did an impeccable, perfect performance as the Joker,” says Leto. “It’s one of the best performances ever in cinema. I had met Heath before. I didn’t know him well, but he was a beautiful person.” Ledger performance wasn’t only the best Joker people had ever seen, but truly one of the best supporting roles in a drama to this day, his legacy in the Batman universe will forever live on. Ledgers chaotic king of crime Joker even gets a small shout out in Batman: The Killing Joke, in a wall of pictures of the Joker one is him sitting in a jail cell like that iconic scene in The Dark Knight. 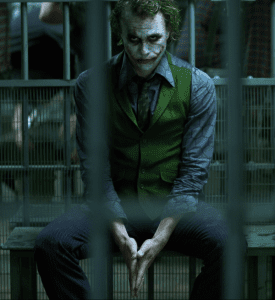 In comic books we as readers see different writers and artists take a swing at our favorite characters regularly. Sometimes the characters maintain a general likeness to iteration that came before, staying with the core traits of a character and other times it is a completely different character just with the same name. As comic fans it is something we have to deal with, sometimes the hero you hold nearest and dearest to your heart does something that makes you so upset you have to go back and read an old comic to clear your mind. This constant switcho chango should make us adapt well to the recasting of actors in various movie adaptations. This is one of the reasons Leto was able to consider taking the roll of the Joker,  “I think had it only been portrayed by Heath and it was never a comic book, maybe I would have felt that would be inappropriate,” Leto says. “But I thought that given the history, it was OK. The good thing about other people having done this is that you know what direction not to head in.”

I think it is fair to say he went in a direction that none of us ever anticipated and in a 75+ year history that in itself is impressive. It took a couple of brave borderline crazy (in the best way) men to bring us a Joker so soon after Ledger’s performance, but was an essential choice in this new DCCU, because who is Batman without the Joker?