Oh My Ghost Of Tsushima! I did not expect to wake up to this kind of news today. PlayStation with absolutely no warning has announced a release date for Sucker Punch’s incredible looking samurai title. Ghost Of Tsushima will officially launch June 26th, 2020 exclusively on PS4 and PS4 Pro. They were also nice enough to drop a new story trailer with the news! Check it out below-

I almost can’t believe what I’m seeing. The only reason I can is remembering how amazing Infamous Second Son looks. Sucker Punch is one of the most underrated teams in PlayStation’s arsenal of development studios, and they’re going to get a shot to show what they can do with this one. The visuals of this trailer are simply unreal. I also love seeing the stealth action, and some of the multiple locations you’ll be going to in the huge open world.

We get the chance to see our protagonist “Jin” as a young boy at the start of the trailer. We also start to see the people you’ll meet as you explore the world of feudal Japan. There’s his uncle, Shimura, as well as Khotun Kahn, the warlord invading your country. These are some of the newest elements added to a game we are truly going into blind. I think that’s one of the things exciting us about Ghost Of Tsushima the most, we are getting something very new that hasn’t had a bunch of spoilers. Games too often don’t even release before we know half of the story, and that’s not the case here. 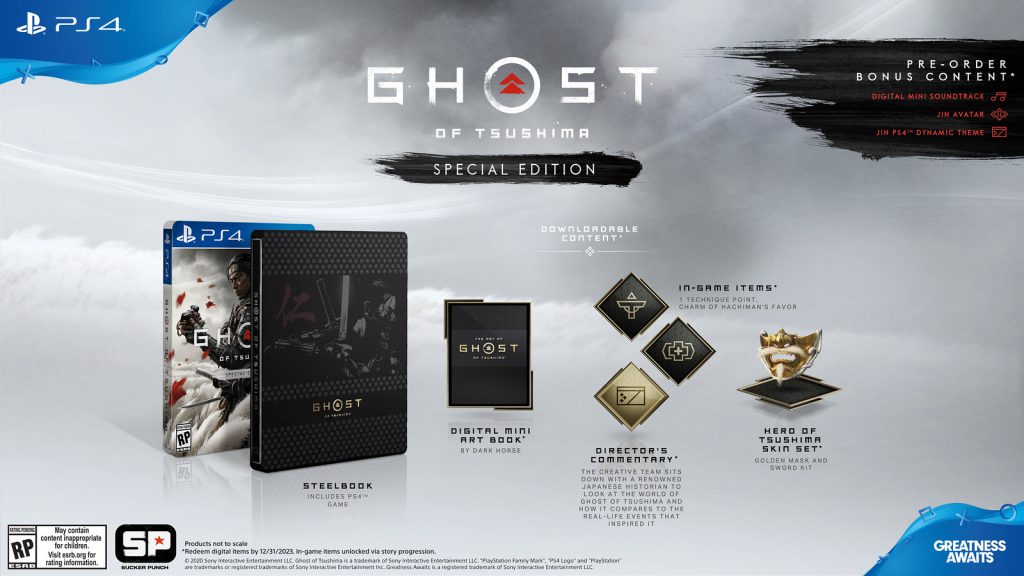 Besides a release date and trailer, we excitingly have access to pre-ordering standard and special editions of the game. The pre-order bonus in general is a digital mini-soundtrack and a Jin avatar as well as dynamic theme. The digital deluxe and special editions are both priced at $69.99, but do have some differing content. Both will include a digital mini art book, director’s commentary, Hero of Tsushima golden mask and sword kit, and two in-game items (Charm of Hachiman’s Favor and one technique point). The digital deluxe will include a samurai dynamic theme, as well as additional body armor and horse and saddle skins for the Hero of Tsushima pack. The physical special edition will include a steelbook case.

The “piece de resistance” is the collectors edition. It will include everything from both the digital deluxe and the physical special edition. But wait! There’s more. Besides those inclusions, purchasers will also get a physical Sakai mask and stand, a 48 page mini art book by Dark Horse, a furoshiki (wrapping cloth), a 4+ foot Sashimono (war banner), and a cloth map. All of this can be had for the low price of $169.99, which isn’t bad for the amount you get. All editions include the game, as obvious as that should be. 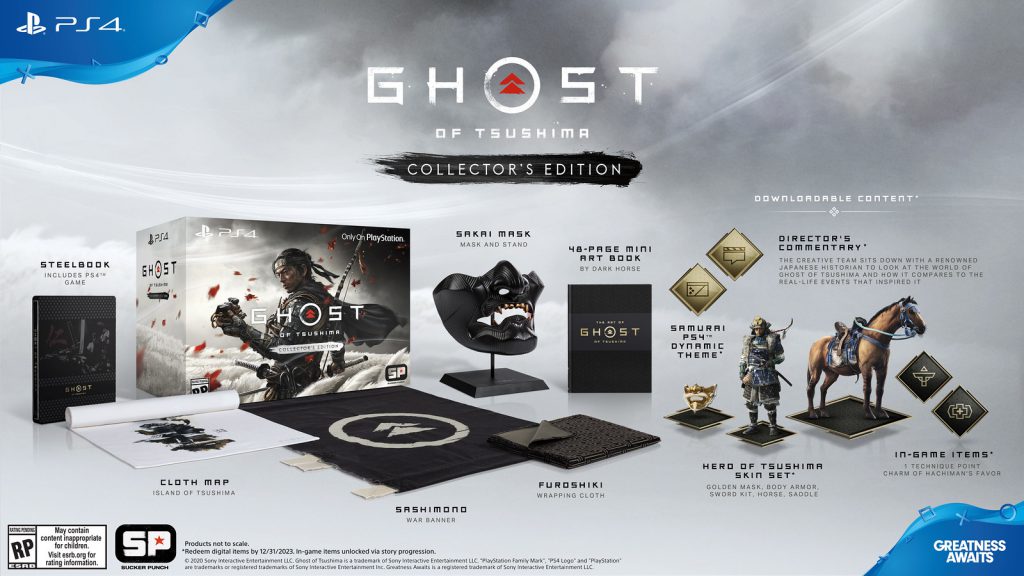 I’m just can’t wait to play Ghost Of Tsushima. Everything is shaping up for this to be a sleeper hit in 2020, especially sliding under the radar right after The Last Of Us Part II at the end of May. With E3 smack dab in the middle (as long as coronavirus doesn’t cancel it), PlayStation may control the narrative during June and have PlayStation 5 news to disclose around then. Maybe tell us the plans for playing these games on PS5? We’ll see!