Batman: The Killing Joke is one of the most iconic works in the DC universe, the amazing Bruce Timm got his crew back together again to adapt this brutal story into an animated feature. This is a story that changes everything for both Batman and Batgirl forever, I had to incredible opportunity to chat with Tara Strong who voiced Barbara Gordon in the feature, she has been the voice of Barbara Gordon in various roles for the last 19 years!

Kyle: Has it been fun to have your kids grow up watching cartoons you have voiced characters on?

Tara: Absolutely! They can always pick out my voice, they love finding my stuff in things that they don’t see me in regularly, my younger one is always like you were the five kids in Family Guy then my older one was in 5th grade when pony hit and his friends were always like what happens next? They were kind of driving him nuts. It is definitely really fun, it’s interesting they love having a mom that is fun and different and crazy and embarrassing them all the time.

Kyle: You have voiced a lot of family friendly characters like Timmy Turner and Bubbles from Powerpuff Girls, but one of my favorite animated shows ever was Drawn Together. Is it fun to step out of the family friendly rolls every once in a while?

Tara: Oh god ya it was so fun I wish we could do more of those. I remember taking my mother-in-law to a Rugrats taping and then took her to a Drawn Together and I told her this isn’t Rugrats get ready. It would be fun to do more.

Kyle: When I was looking at your filmography I lost track of how many comic book characters you have voiced, are you a fan of comics or is that just a part of the work?

Tara: When I was little I collected Batgirl comics. I was always a fan of comedic ones, I like Archie, Little Devil, Casper, Wendy, I was really really into Archie comics. More recently I will read something if I am working on it. The Killing Joke is an amazing amazing book, I hadn’t read it when I was younger.

Kyle: That is probably a good thing it was sort of a crazy book.

Tara: Yeah I didn’t read it before I got my script, for me as an actress it was really organic to see a character I have known for 20 years go through this, it was kind of shocking and for that reason it was more organic from an acting standpoint. Now that I have read it of course I see how close they got, have you seen the Killing Joke?

Kyle: Yes I got to watch it this afternoon, and it is word for word after the back story part it is insane how close it is.

Tara: It looks like you are looking at the comic, my son, my older one doesn’t like a lot of super hero stuff, he doesn’t like them to look fake. He saw that and he said it looked like the comic and loved it right away. He hasn’t read The Killing Joke but when you see how much it looks like an actual comic it’s just amazing.

Kyle: You have voiced Barbara and Harley many times and of course many other DC ladies, do you have a favorite?

Tara: Oh gosh they are both such opposite ends, they aren’t even on the same coin. I really love playing Batgirl and I really love playing Harley. It would be really hard to choose, it would be like asking to pick your favorite kid. Harley is certainty more fun and I get to take out my frustrations when I play her. Batgirl is pretty much the only voice that I do that is close to my own voice. There is something so real about Batgirl, to really get into the places they have put her in over the years and this is certainly the deepest and darkest she has gone.

Kyle: In the comic the brutality of what happens to Barbara at the hands of the Joker is integral to the story, but you don’t see her other than that. What did you think when you found out they were giving her a much deserved back story in the film?

Tara: I am so obsessed with her back story, I love it so much and it so its almost insulting when people don’t get it. The book is not long enough for a feature so when you think of what you can add why not add Babs? It is so well written, it is so beautify the animated, it is just incredible. There are so many scenes that look so real its like is that real rain? It boarders between looking real and looking like an authentic comic book, it is just this amazing film noir mix. Batgirl is a woman now not a little girl, she makes the first move with Batman. It’s something you can tell from the beginning of the story that she really wanted. When people are like Batman took advantage or its so gross because he is older its insulting to me as a woman, she is a grown woman and she made this choice. This absolutely what she wanted, he would have never done that had she not made that move. They aren’t related he isn’t her dad or brother there is family like relationship.

Kyle: She is definitely in charge in that scene.

Tara: Ya I just thought it was not gratuitous it was completely classy, Drawn Together was 1000 times dirty than that. I’m not just saying this, I love this film so much I think it is the most proud I have been of anything I have worked on. I just love it so much.

Kyle: I am a crazy big Batman fan I had read The Killing Joke years ago and when I heard it was being adapted I was apprehensive, just because it so brutal. It was so amazing though, The Batgirl back story really made it! It felt so organic like it should have always been part of the comic.

Tara: Absolutely other wise she is just a pawn being abused now she is a person.

Kyle: Barbara’s strength post Killing Joke always blew me away, was it important to you to have the last scene being Barbara assuming her role as Oracle?

Tara: You know we recorded so far in advance that I completely forgot that till I watched it. I got to watch it Monday before Comic Con and I was just YESSS I totally forgot, I forgot she turns into Oracle at the end. I am crazy for Oracle! I love the concept she is still bad ass, she is not held back by what has happened to her. Years ago we did the Extreme Ghostsbusters and Jason Marsden played a Ghostbuster in a wheel chair, we got a lot of great press and a lot of people were so happy to be represented, there are so many different types of people in the world. There are not that many superheros outlets where they show someone in a wheel chair doing something amazing. To me Oracle is amazing, A: she is a woman B: she is in a wheel chair, I just love that concept I really hope they do that as a series.

Kyle: With 450+ acting credits do you see yourself as a strong female voice in what seems to be a male dominated industry?

Tara: I never really saw this industry as male dominated. I know some of my female counter parts disagree especially if they are in promo or commercial but I see a lot of woman doing promo and car commercials. I started in animation when I was 13 I was the lead in Hello Kitty. I have never felt like I wasn’t getting a fair shake because I was a girl, in fact the only time I felt that was recently with Powerpuff Girls because all the guys are still in it. That was the only time I felt like being a girl in this business was not equal. I have always felt this business was pretty fair to girls. Its not like when I am working on Batman that dudes are getting 10x what I am getting its not like that at all. Animation is pretty even keeled you start every series at scale and when there is a pick up you might go to scale and a half and as the seasons progress you get little bumps. Its favored nations which means everyone gets the same.

Kyle: Any characters or projects you would love to do but have not yet?

Tara: You know I have to say I don’t know what horse shoe I was born under but I have had the privilege of playing so many iconic characters. I feel so lucky and blessed there is nothing I am like ahh I haven’t got the chance to do that. From a financial stand point the Simpsons would have been nice as that was not a scale project. As a little girl I really wanted be Batgirl and I wanted to be The Little Mermaid. Shortly after moving to Los Angeles from Toronto I got to play her daughter in the sequel and sing with Jodi Benson. I have just been so lucky and I am so grateful!

Kyle: Last question, we are a site for fans run by fans is there anything that you fan out over?

Tara: I am a crazy fan for Game of Thrones like its out of control. I cant believe how long we have to wait.

Kyle: And for only 7 episodes, we aren’t even getting a full season next year!

Kyle: Thank you for taking time out of your day to talk about this amazing movie and your amazing career.

Tara: Awe thank you, I am so glad you liked it. It’s so funny when I first saw it I was like everyone is going to love this! Then I know there was some backlash and a couple people said to me you know these people were prepared to give backlash, they have been wanting this for so long they knew automatically they weren’t going to like it, a lot of people aren’t giving it a chance. On my twitter, the feedback from fans has been amazing so much positive feedback. At one point I was like you know what I don’t care if people don’t like it because I love it so much. Then when I saw people saying positive or negative things it really effected me. When people love it I’m so happy and when people get that Batgirl is a woman making her own choice I get so happy.

Batman: The Killing Joke is available for digital download RIGHT NOW at all your favorite outlets and comes out on Blu-Ray and DVD on Tuesday! You can also catch Tara in a multitude of animated TV shows including My Little Pony: Friendship is Magic! 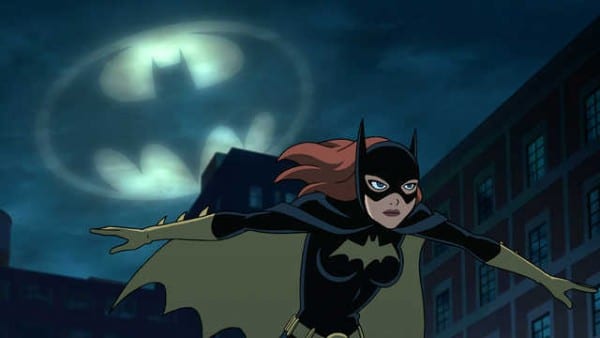