Comedian Ralphie May has passed away at the young age of 45. He had canceled a few shows due to the fact he had been battling pneumonia. This morning his body was discovered in his private home in Las Vegas. He passed away from cardiac arrest. 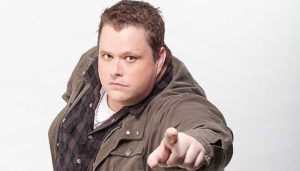 Ralphie May started his comedy career at the age of 17 when he won a comedy competition to open for the king of the comedic world at the time Sam Kinison. He took second place during the first season of ‘Last Comic Standing’ and he never had to look back. From there he did many TV appearances, four Comedy Central Specials and two Netflix and had won Casino Comedian of the Year just two days before his untimely passing.

As I looked through Ralphie’s social media outlets, you can see just how much he was loved and respected by everyone. As part of my ‘Laughter Really is the Best Medicine’ series Ralphie May had been one of my top dream interviews. Earlier this year he came to the Stardome Comedy Club in Birmingham and I missed it because of reasons I cannot even remember now. I remember saying “I’ll catch him next time he comes to the Stardome”. I should have made time and went to watch his stand-up in person because now I will never have that opportunity.

Dear reader, today MAKE time to do what you really want to do because things change and in a blink of an eye you may never get a chance to do it again. Rest in Peace Ralphie May.

Home » News » Comedian Ralphie May has Passed Away at 45