On September 25, 1992, Batman: The Animated Series aired on Fox Kids, introducing a new generation of fans to the beloved DC characters. And even after 25 years, the series still holds up as being the best adaptation of the comics.

Animator and writer Bruce Timm wanted to introduce a new take on the character that would depart from the campy tone of the 1960s Adam West series. A little bit of the gothic feel of Tim Burton’s films was injected into the show, giving us the noir feel. Kevin Conroy voices the Bruce Wayne/Batman and is joined by Mark Hamill as Batman’s most iconic villain, Joker, Arleen Sorkin as the original character Harley Quinn, Loren Lester as Dick Grayson/Robin, John Glover as the Riddler, and Diane Pershing as Poison Ivy.

When people ask me who my favorite Batman is, my answer is Kevin Conroy. I grew up on Batman: The Animated Series and to me, he is Batman. A lot of this comes from the fact that Conroy was the first to suggest the idea that Bruce and Batman should have completely different voices. It’s something really simple, but incredibly powerful. It also speaks volumes to the characterization of Bruce in general. In an interview with The Hollywood Reporter, Conroy spoke on creating the voices: 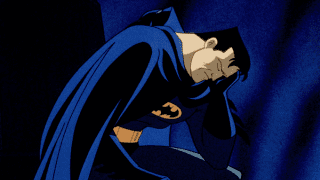 “[Bruce Timm] explained the dark, noir story and Bruce’s vow to his parents which leads to the dual identities. It was sort of Shakespearean tragedy, so I approached it like you would Hamlet or Edgar in King Lear.”

Originally, Conroy says, he had a much different approach, providing Bruce with a much more lighthearted, jokey voice. He wanted to have a bigger contrast between the brooding hero and the playboy. But after a couple of episodes were recorded, it became apparent that the humorous voice didn’t work with the direction of the series. “It was too much. So Bruce had me re-record the first few episodes and tone it down. They liked my idea of two voices; they just wanted it to be more subtle.”

Lester drew from the 60s Batman as inspiration for his take on Robin. He grew up watching the series and couldn’t help but be inspired by Burt Ward’s voice. Lester jokes that he wasn’t trying to do an impersonation of Ward, he just really liked the energy and pitch that he provided the character.

In preparing for the role of Poison Ivy, Pershing drew upon the script and the Ivy action figure. In finding the voice, Pershing said:

“I looked at her and thought she was very sexy, so I could use my sexy voice I used on my perfume commercials. She was also doctor Pamela Isley, which means she was a Ph.D. or an actual doctor. That means she’s very smart, she’s very bright, she’s got a really good brain. So I put the two together.”

The Joker was originally going to be played by Tim Curry, but he recently revealed that he was fired because he came down with bronchitis. Two that auditioned for the now vacant role were Hamill and Glover. At first, Hamill wanted to play an unknown villain such as Clayface or Hugo Strange, and was actually cast as Ferris Boyle, Mr. Freeze’s boss, in the episode ‘Heart of Ice.’ Later, he read for Joker and was told not to think of Jack Nicholson’s take on the villain. Hamill said:

“I remember going in and they gave me the Nicholson note, which wasn’t anything I wanted to do. I wanted to deliver an old school comic book interpretation of the Joker. He’s a theatrical guy who really has fun; the joy has to come across in his battle with Batman.” 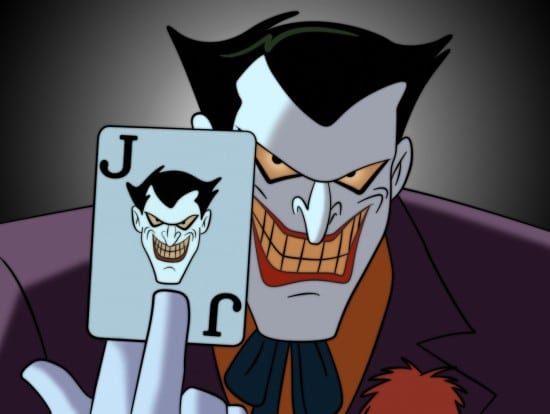 Hamill didn’t think that they would hire him because he was Luke Skywalker, so he went into the audition ready to give it the best he could and not get the job. He describes this attitude as “freeing.” He was able to really cut loose because there was now anxiety about booking the gig or not. “There’s no way they would hire Luke Skywalker as the Joker,” says Hamill. But he was wrong. Casting director Andrea Romano told Hamill later that it was his laugh that won him the role.

Romano also spearheaded the recording process, doing things much differently. Glover recalls that she would stage it like a play. They weren’t just there to read their lines. “She’d play your previous episode so you could see how you attacked the character. Then we’d do a read-through and Andrea would give us notes. Then we’d record the episode. It was an incredibly joyous experience.” Others described the atmosphere Romano created as being one in which they were free and safe to explore their craft.

Batman: The Animated Series has had such a strong impact, even 25 years later. Everything about the show clicked, and it really speaks to the creative team and actors. They did something truly magical from 1992-1995. Fans were able to get underneath the cowl with Conroy and really explore what kind of a man takes inspiration from a bat to fight crime. And we learned more about villains who have never really been at the forefront of comic lore, including Poison Ivy, Scarface, Clayface.

One of the lasting legacies of Batman: The Animated Series is the created of one of the most popular DC characters of all time, Harley Quinn. Over the years, Harley has grown from a henchman into a complex villain. Hamill reflects on Harley’s journey:

“It was so wonderful to see how Harley Quinn emerged, because originally she didn’t have a name. She was called ‘Joker’s Hench-wench’ or something like that. Arleen opened her mouth with this Judy Holiday, hair-brained voice and we fell off our chairs.”

One of the greatest things for Harley was her beginning to question her relationship with Joker. She was his sidekick, always taking his orders and abuse. The idea of a kids animated series taking on feminist issues was unheard of at the time, but one of the biggest moments for Harley came an episode in which Harley succeeds in capturing and almost killing Batman in order to make Joker feel better. Instead of

praise for her success, Joker verbally abuses Harley, saying he can be the only one who can catch and kill Batman. Later, in the episode ‘Harley and Ivy,’ Joker fires her for messing up his one shot at catching Batman. A rejected Harley teams up with Poison Ivy, who reveals just how terrible he is to her, breaking her free from his influence. Pershing adds that it was a truly groundbreaking moment.

This episode made the dynamic duo influences for young girls. Pershing recalls an experience at a convention in which a young woman admitted how much strength she drew from the Poison Ivy.

“One girl came up and said she was sexually abused — and when Poison Ivy spoke up and told Harley she couldn’t let any man do that to her again, it turned something in her head and she was crying when she told me. I’m listening to this and I’m overwhelmed to think something I did 25 years ago had such a strong impact and I unwittingly was able to help people.”

Other cast members have had similar exchanges with fans.

Thank you, Batman: The Animated Series, for telling compelling stories and for introducing us to a different Gotham City. For me, this was my first take on Batman. I’m about to turn 27, so I literally grew up with this show. It is the vision I have in my head and what I compare all others to. I remember attending a convention a couple of years ago because Kevin Conroy was there. I was standing in a line next to his table when he came out from behind the curtain, stood up on the chair, spread his arms out, and delivered the iconic lines: “I am vengeance. I am the night. I am Batman!” And I almost started crying. He is my Batman.

Now it’s time to go binge watch all 85 episodes and relive the magic.