The Caped Crusader is not know for his ability to work well with others, his loaner tendencies and general bad attitude tend to scare away even the bravest of heroes. Robin is the obvious exception though part of what makes them work is that they are not equals, Robin is Batman’s subordinate. For many many years Robin meant Dick Grayson and the relationship that Bruce and Dick had was and continues to be legendary. Through the years Robin has continued to fight along side Batman, but the boy/girl/child under the costume has continued to change as previous Robins has spread their wings and become their own independent heroes…or died. With at least six different characters having put on that iconic costume there were bound to be some personalty clashes along the way, here is a look at some of the best fights The Dark Knight and The Boy Wonder have had in their epic long crime fighting relationship.

The first Robin, Dick Grayson has had a fair amount of fights both as a child and as the adult hero Nightwing with Batman. The fight that comes to mind as Robin comes from Young Justice for me; The entire Justice League is being mind controlled by Vandal Savage and the rest of The Light. Superboy and Robin take on Batman and Superman, though this fight should not have been any contest the boys get the W…or get the win long enough to turn off the mind control so Supes doesn’t smoosh them like bugs.

As an adult the conflict between the two have been more frequent and by far more brutal. Sometimes its driven by sheer anger, but one of the worst fights I remember was recently. After Dick is presumed dead instead of coming back to life or getting a new identity among his family Bruce wants Dick to continue to play dead, to infiltrate the bad guys. First thought Bruce tests him, to see if he is ready for that, to give himself over to the cause completely. Its heart breaking because there is an acknowledgment that if Bruce really asks him to do this, nothing between them will ever be the same. 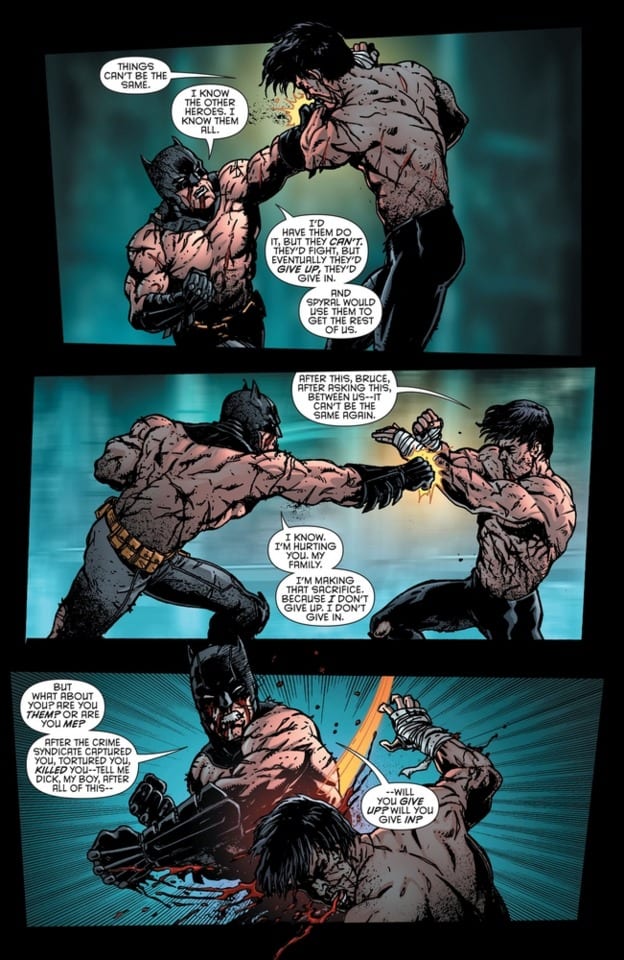 Jason Todd has not had the smoothest life, death, and rebirth. His early life was not easy, and once he takes on the mental of Robin it isn’t a piece of cake. Most children/teens do not travel the globe fighting super villains and such. Though there were fights between Batman and his then Robin most of the real fights between Bruce and Jason have taken place after Jason came back to life and assumed the Red Hood identity. Jason was not able to forgive Bruce for not killing the Joker after the Joker took Jason’s life. After he helped Hush try and take on Batman he comes back himself to try and change crime in Gotham and get Bruce’s attention. They got toe to toe a couple times, it ends with Bruce not willing to kill either Jason or The Joker, then a bomb going off. The fights are emotionally charged and Jason is a worthy opponent. 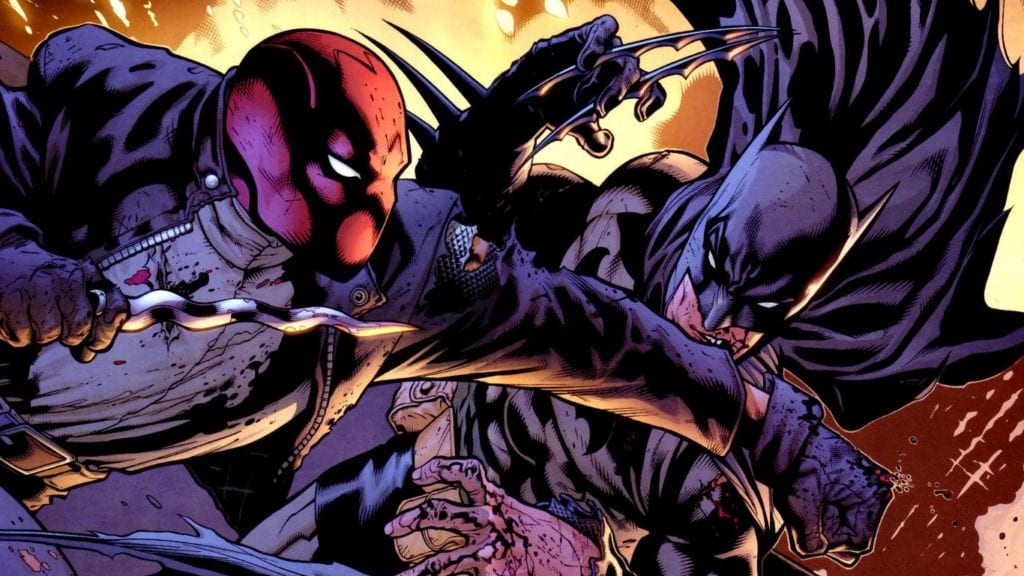 Damien Wayne started his life off with his crazy mother and grandfather. He was born an assassin who would assume the legacy of his grandfather as the head of the League of Assassins, and then dropped off with a father who didn’t know he existed. This father lives off his self hate, guilt, and a ridged sense of morality. The combination was bound to lead to some unsettling encounters. The start of Batman and Robin when the new 52 rebooted was fun to read and inspired the Batman vs Robin animated movie. The fights between Robin and Batman were crazy to watch, Damien zips around like the little ninja he is. It is a little heart breaking to watch Bruce struggle with the knowledge he has a son that he sees as being so different from himself. Though anyone who knows him sees the similarities. Their story gets better over time, but Damien is for the the strongest willed of the Robins at the age that he is.

Be sure that there are more fights then this and probably more that are more meaningful then these, with 75+ years of story telling there are endless amounts of comics. While some of these guys are rather moody and need a good fight every once in a while, the real moral of this story is woah Batman would be hard to work with sometimes, but none the less no matter what terrible situations he has put them through he loves his kids adopted and not.

Home » Fandom » Batman vs His Robins