After last night’s episode, Gotham is back in full swing. Let me say that with everything happening in the first episode, you can see how Bruce Wayne (David Mazouz) is slowly changing into the hero we know and love. With the new preview out for next week’s episode called ‘Trespassers,’ we get a glimpse of what we hopelessly need.  Take a look below:

It all sounds a lot like what Heath Ledger’s Joker said in The Dark Knight. “I think you and I are destined to do this forever.” Both the Joker and Batman exist because of each other, and at the moment in, what I’m guessing, is ACE Chemicals, Jeremiah saying this to Bruce in a giggling voice, this indeed is the start of something spectacular. 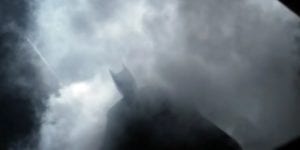 Now, I’m not sure we’re getting a look into the future this soon into the final season, as the last episode is meant to be one ten years into the future. Batman disappearing into the smoke, like the caped crusader that we know, is just such a nostalgic look. It makes me think of Burton’s Batman in 1982, the first time Batman comes into view as just a silhouette with smoke surrounding him. I love how they put these small little things from old and newer Batman films throughout the seasons, and this season will be like no other.

With the new preview, Fox also released a new set of episodic images. Take a look in the gallery below:

Do you think we’ll see Batman appear in the next episode? What about Poison Ivy, how will she let herself know to the city of Gotham? It’s surprising that she’s not fighting for a piece of the city, it would be amazing to see as, in the Batman video games, she owns a part of Gotham filled with her plants. Let us know in the comments below.

Here is also the official synopsis for Trespassers:

“Gordon and Bullock investigate a location where several kids have been kidnapped. Barbara proves to be an unlikely ally to Gordon. Meanwhile, Bruce looks into an alleged witch with healing powers for Selina, and Nygma deals with demons of his own.”

Gotham: Trespassers will air next Thursday, January 10 on FOX.