A Walk to Remember hit theaters 16 years ago today and let’s be honest, your tear ducts were never the same.

Both of the film’s stars Mandy Moore and Shane West took to Twitter to commemorate the milestone.

And we wanted to do something too, so to honor the 16th anniversary we put together a list of some of our favorite moments, even though a few of them make us want to ugly cry.

Pick a song from the movie’s amazing soundtrack to set the scene and enjoy!

1. When Jamie sang “Only Hope” at the school play:

Mandy Moore is seriously a national treasure and this scene gave so many new layers to Jamie Sullivan.

2. And Landon kissed her right afterward:

Even Landon was completely swept away by her and broke character just so he could kiss her. Also, Shane West was Mandy Moore’s first on-screen kiss!

3. When Jamie revealed she had cancer:

This scene will always melt us into a puddle of tears.

4. And her biggest fear:

Before Landon, Jamie had accepted her fate as God’s plan. She feared getting involved and ultimately falling in love with him because she knew that she would have to leave him. However, their love was so epic for each of them at that phase of their lives that it was worth the risk.

5. When Landon was with her every day at the hospital:

While Landon was building Jamie her telescope she had to be rushed to hospital and Landon never left her side. 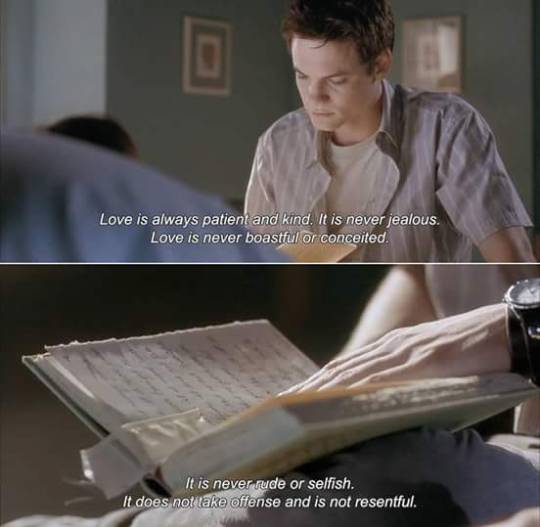 We had never heard of this Corinthians passage until this scene and to this day every time that we hear it, we think of this movie. Keep using it at your weddings people, nothing is better than a random Walk to Remember memory.

8. When Landon broke down:

We’ve always said that when Mandy Moore cries, we cry, but Shane West’s tear shedding abilities in this movie are on another level. The scene when he goes to thank his dad, with whom he’s had a rocky relationship with, for helping Jamie get private treatment is one of the most tender and beautiful scenes in the movie.

9. When Landon Learned how to Dance:

“Someday we’ll know if love can move a mountain…”

10. When they stood in two places at once:

One of the cutest scenes in the movie was when Landon was helping Jamie cross things off of her bucket list, and when he says “you’re straddling the state line…you’re in two places at once,” Jamie’s heart (and ours) completely burst.

11. When Jamie finally opened up about the #1 thing on her bucket list:

Mandy Moore and Shane West both came up with middle names for their characters on the spot. West chose Rollins for Landon and Moore chose Elizabeth for Jamie.

Landon was your typical bad boy with no real direction before he met Jamie. At one point after they’d been dating his mom finds his own bucket list, which included things like go to medical school and examine a moon rock. It just went to show how much these two needed each other, even at such a young age.

Literally, the most iconic line from the movie.

15. And was just completely perfect:

Find you someone who looks at you the way Landon Carter looks at Jamie Sullivan.

16. And lastly, when Jamie’s dad gave Landon this assurance:

There you have it! Now, please excuse us while we go watch this movie and re-read the book all weekend! Check out our coverage from the film’s 15th anniversary last year below!