One of the most special parts about conventions, especially for a show like The Walking Dead, is seeing some of your favorite actors and characters back together. No one is safe in the apocalypse and saying goodbye to some of your favorite characters is never easy, but being able to see them reunite on stage and reminisce about their time on the show is a real treat. 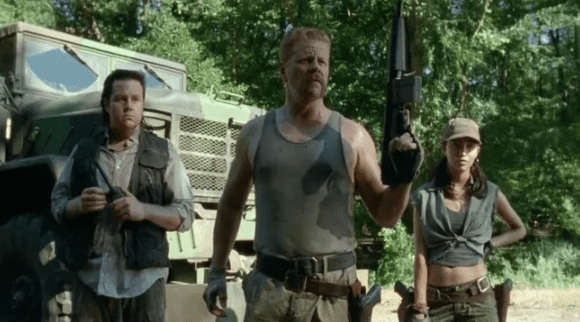 At Walker Stalker Con Atlanta, Abraham’s Army took the stage for a panel full of laughs, which should come as no surprise to anyone who knows the playful and close relationship Michael Cudlitz, Josh McDermitt and Christian Serratos all share. It was terrible when we lost Abraham in the Season 7 premiere, but seeing that he’s still just as close with his old co-stars is a nice consolation.

Cudlitz also wasted no time making himself at home. 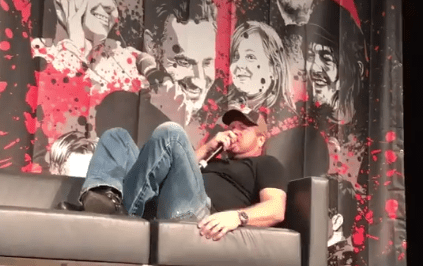 The trio had a lot of fun during their panel, including this moment when Josh McDermitt tried convincing Christian that he was a contestant on Hell’s Kitchen.

“Wait were you on Hell’s Kitchen?” Josh McDermitt, with the help of @Cudlitz and a fan, trick @cserratos #WSCAtlanta pic.twitter.com/HoiGycU12b

In actuality, McDermitt appeared on the show as a celebrity guest for one of the challenges.

One pressing matter on everyone’s minds heading into the Abraham’s Army panel was whether or not Cudlitz would comment on the swirling rumors that he would be the character crossing over on Fear the Walking Dead. When Robert Kirkman confirmed that the two shows would intersect, the character of Abraham seemed like the most obvious choice as he still would have been in Texas during Fear’s current timeline.

Cudlitz managed to skate over the question by joking about how people would take whatever he said and make it into what they want the answer to be.

Too funny! @Cudlitz addresses the rumors he’ll be on Fear The Walking Dead…sort of #WSCAtlanta pic.twitter.com/IkELfExSH6

Cudlitz also spoke on how working on The Walking Dead really made him think about family more and the people that we have in our lives as “chosen family”.

“The show makes you think about your family” @Cudlitz talks about what he took away from being on TWD #WSCAtlanta pic.twitter.com/FWR2zN5wYJ

“The bigger thing for me with the show was it made me think about my family. Some kind of catastrophe – something big,  something big could happen and historically can always happen and you think more about your family and chosen family as opposed to everybody that shows up for Thanksgiving. And you think about the people that you’d rather spend time with, and sometimes, yes, they’re the same people, but sometimes your chosen family is closer.”

Josh McDermitt took a minute to tell a story about their Season 8 premiere party where the entire cast and 6000 fans all got together to watch the episode and then film Talking Dead afterward.

“They were just having a conversation like 6000 people weren’t there” Josh McDermitt laughs about @JDMorgan and a fan #WSCAtlanta pic.twitter.com/WHvF61HxSo

While it’s hard not to love Jeffrey Dean Morgan, a lot of people are very familiar with his wife Hilarie Burton who played Peyton Sawyer on One Tree Hill. So, one fan decided to take advantage of a quiet commercial break and yell up to Morgan to tell him how much she loved his wife. 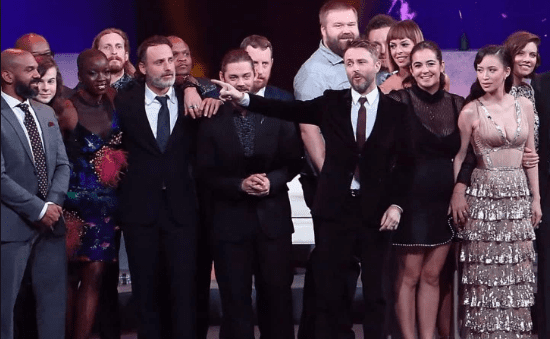 Abraham may not be on our screens at the moment (maybe he will be soon on Fear!), but Rosita and Eugene are sure in for a heck of a season as they embark on a season-long war against Negan and the Saviors on opposite sides.

Be sure to check back on Fan Fest for more exclusive interviews and content about everything that’s going down at Walker Stalker Con Atlanta!

Andrew Lincoln on Babies, Not Shooting Negan and his Recent Gift from Norman Reedus

Where does Jadis’ Allegiance Lie? Find Out in Our Exclusive Interview With Pollyanna McIntosh