Aggelos, developed by Wonderboy Bobi and Storybird Games, is a love letter to the retro era. Published by PQube and LookAtMyGame, Aggelos wears its influences on its sleeve. Part Metroidvania, part hack and slash, Aggelos is a thrilling example of game design and a must play for those looking for a great, albeit quick, jaunt through a 16-bit inspired world. 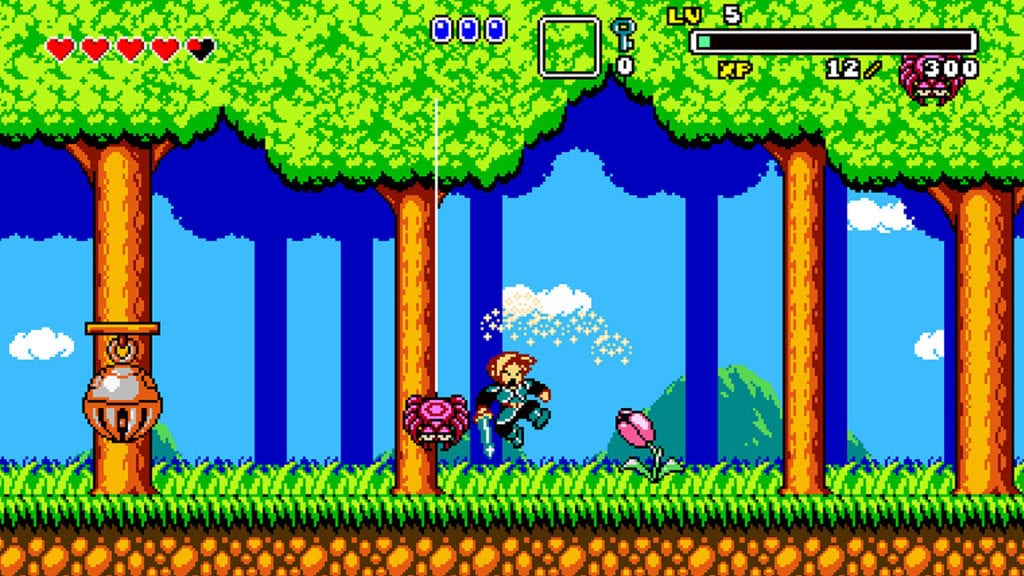 In true retro fashion, there isn’t much of a story in Aggelos. Sure, it’s there – but it’s just a backdrop, giving you a reason to fight your way through the various dungeons. You are a boy thrust into a quest by accident. You save Princess Lys who then introduces you to her dad, the King. He sends you on a mission to collect the elements from various dungeons in order to beat Valion and restore peace to the Kingdom of Lumen. While generic, the story is serviceable and does introduce you a wide range of characters throughout, each with distinct personalities – even if we never get to spend much time with the various townspeople and merchants we encounter. I enjoyed the story for what it is and found myself searching for ways to squeeze any extra dialogue out of the characters that I could. 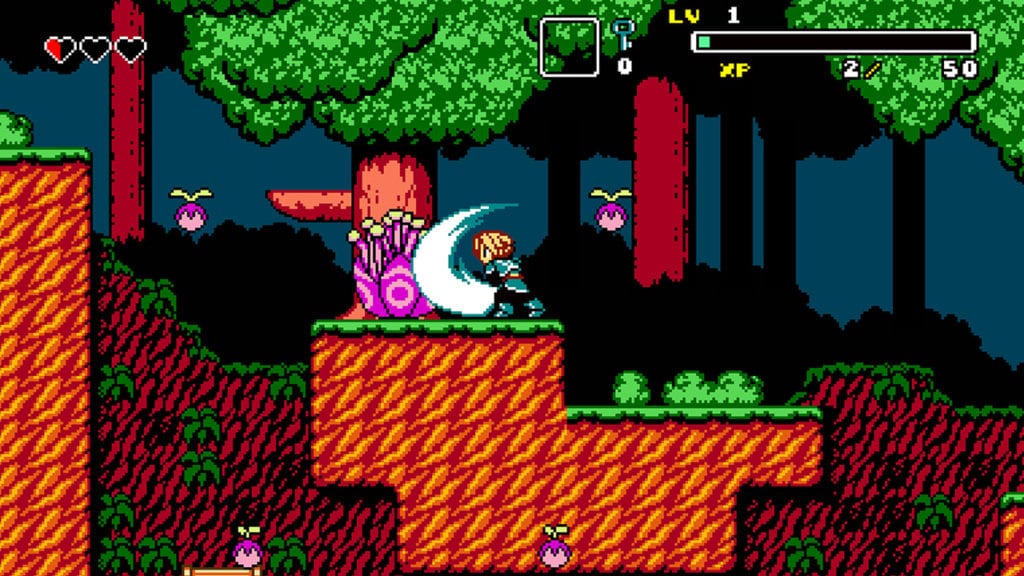 The strength of Aggelos lies in its gameplay. A hack and slash at its core, multiple abilities get added to your arsenal as you progress including fire, warps holes, a bubble shield, dash, etc. These can be combined to tackle the various challenging enemies and bosses you’ll encounter, but are limited by your magic meter so as not to make you too powerful.

Aggelos starts off relatively easy, but around the halfway point – and especially the last two dungeons – there is a noticeable and almost shocking increase in difficulty. There are ways to make your character much stronger, but they involve side quests which players might not realize exist or not entirely understand the steps necessary to accomplish. The clues are all there, but the player must pay close attention to all dialogue (from everybody – including townspeople and merchants) and retain the various, seemingly meaningless, things they say because eventually that information will become meaningful.  My favorite was a string of side missions which involved finding an item, giving it to an NPC, who then gave me another item for another NPC, and so on in a long running item switch off eventually ending with a much needed vial. Believe me; the extra work is worth it.

Aggelos is essentially a series of boss dungeons in which you gain an elemental power after defeating each area’s boss, which then can be used to progress further into the game. The game is non-linear, to an extent. While press releases boast about the game’s open world, they fail to mention that while you can explore many areas at your leisure, you will almost always hit a wall halting your progress until you find the item or skill needed to continue – hence the label, Metroidvania.

It’s a concept gamers know well; traverse an area finding new routes, eventually get blocked by an obstacle, backtrack to find an alternate route, gain a new ability, then return to a blocked area and use that newfound ability to progress. Aggelos does stick to this style for the most part, with the most glaring change being the map; the gameplay is hurt by not having a detailed map which shows where you’ve been and haven’t been. Instead you‘re just given an overview of the world, which – while cool to look at – doesn’t help much with traversing the world, at least not until you are given the ability to warp between save points and even then, doesn’t show you where you got blocked so you can easily return to test out a new ability. This is my biggest gripe with the game, but still didn’t hamper my enjoyment; I just feel that the game would have been immensely helped by a more detailed map.

Instead of using the map, the best way to find the correct route is to speak with the oracle in the castle. Every time you complete a task you can speak with him to be given info on where to head next. It’s not very specific, but it helps you go in the right direction. He will only help with the main storyline though, so you’re on your own when figuring out how to complete the various side tasks available.

The game’s uniqueness stems from its use of elemental powers, which help you work through the puzzle like levels of each dungeon. To explain everything would spoil the charm, but know that each elemental ring grants you multiple powers which can then be used to create platforms, teleport through walls, and more.

Aggelos has just the right amount of retro charm to make dealing with the more frustrating sections worth it and to keep you interested throughout it’s 6 to 8 hour campaign. 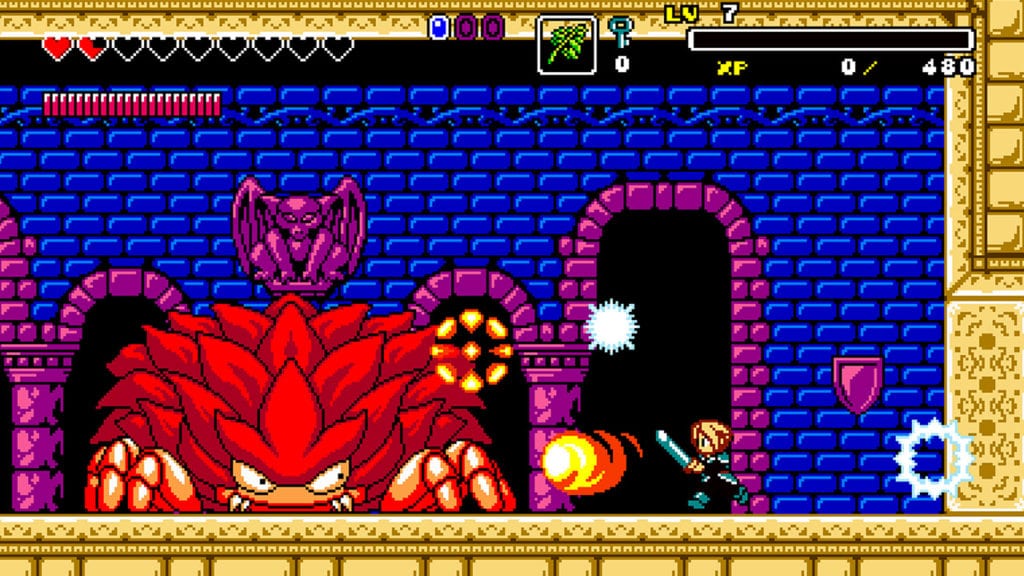 Aggelos is based on 16-bit games of yore, and as such can’t be compared to modern games. Though, there certainly is in a charm in its characters and environments; the game boasts both a ridiculously long list of enemy varieties and an impressive spread of areas to explore, keeping the game continuously fresh.

You’ll fight giant bears in arctic conditions, angel winged birds in the clouds, poison spewing flowers in the jungles, bats and mice in the caves, enraged fish and turtles underwater, fire spewing enemies, and more as your work your way through the various dungeons. When not being attacked, you’ll meet money stealing monkeys, bar patrons longing for a concert, a royal artifact collector, and more. The sheer variety of people, places, and things in Aggelos despite its short length is impressive. 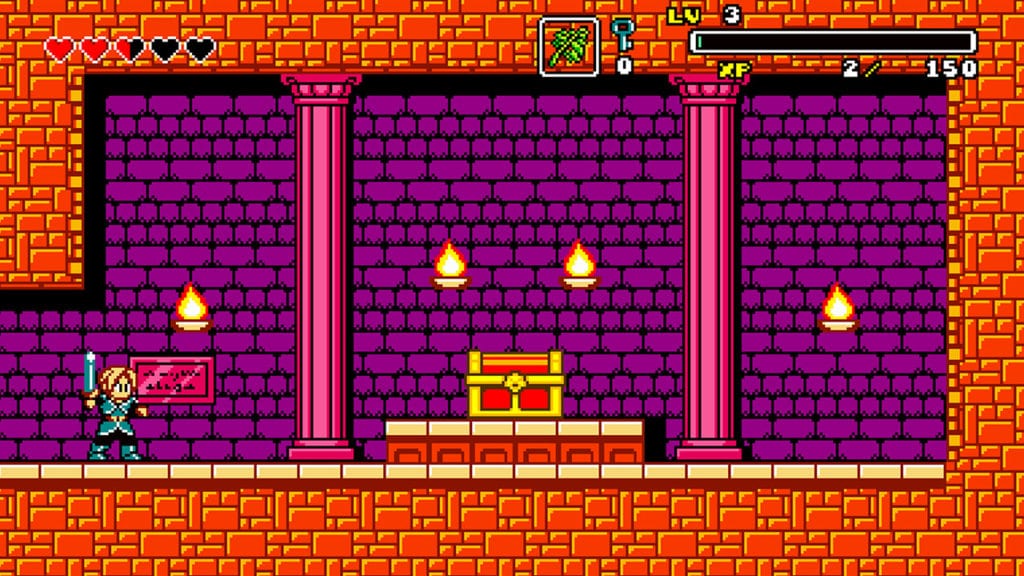 Aggelos is short. You could finish it in one play session if you ignored leveling up and some of the side quests, but most will finish the game between 6 and 8 hours. I took around 8.5 hours, but only because I spent way too much time leveling my character to the max level of 20 – which is definitely not a requirement to complete the game. Still, the game remains fun throughout and would be worth a second playthrough once you understand the various elemental concepts and world layout. 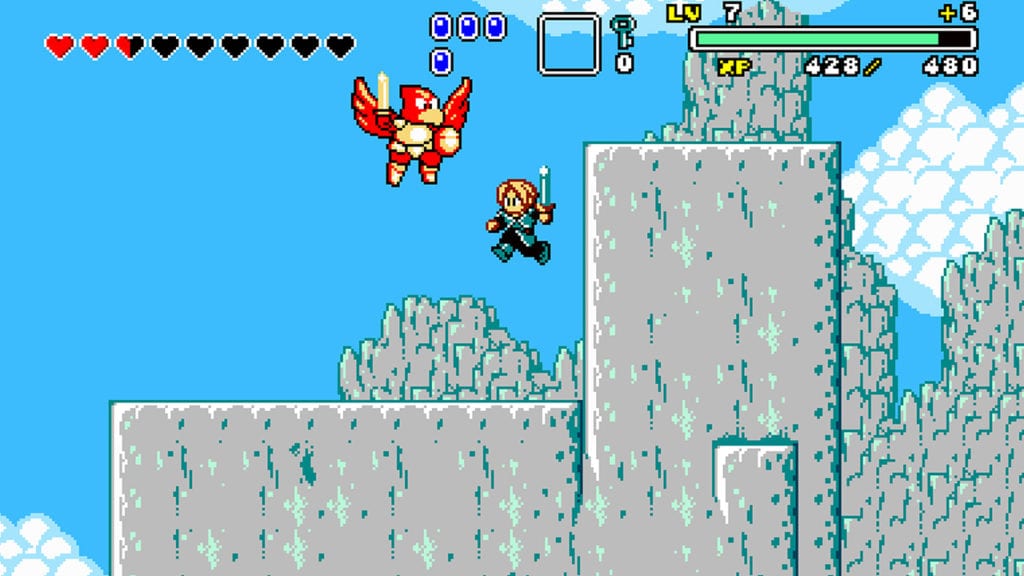 Aggelos is a short but sweet trip; reminiscent of some of the best games of the 16-bit era, the game is filled with fun level designs and creative enemy models. The various elemental items you pick up throughout ensure that the game remains fresh as you are constantly being given new abilities and then being forced to use them, and you’ll never get tired of backtracking to a previously unreachable area and figuring out how to get past.

If you are a fan of the 16-bit era, hack and slash games, or Metroidvania type layouts – Aggelos is a must buy.

Aggelos is available now on PC/Steam ($14.99) and Nintendo Switch ($14.99), with PS4 and Xbox One versions being released later this year.

A review copy of Aggelos was provided by PQube on the Nintendo Switch.