Greetings Fanfest readers! This is the first article in a series called a “Day Late and a Dollar Short Reviews”. My first choice is a fairly recent videogame, as it was just released on 10/13 on every major video game platform. That game is none other than WWE 2K18 and I will be reviewing it for the PS4. So let’s frogsplash our way into the game! 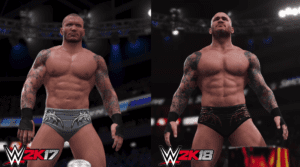 As with any year, the graphics has it’s ups and downs. For every photorealistic Triple H or Finn Balor each year there are some truly hideous renditions that somehow make it into the game(2K17 Dana Brooke still gives me nightmares). With that being said,WWE 2K18 does a stellar job at making sure 99.9% of the superstars actually look like the wrestlers they are modeled after.

The gameplay remains mostly unchanged from previous iterations. By mostly I mean alot of the new changes are more like reinstatements from previous installments. That’s not a bad thing however as I truly didn’t realize how much I missed “Ultimate Control” Moves in Smackdown Games until I got them back in 2K18. The only complaint I have is that the computer is really good at getting out of these moves quickly,  so don’t initiate unless you are near where you want to perform said move.

One of the biggest changes this year comes courtesy of the Royal Rumble match. What was once a button mashing match is now a anything can happen, rapid fire elimation fest…and it is awesome.  You can now be eliminated in a myriad of ways, which forces you to play smarter. Easily the most fun I’ve had in 2K18 has been in Royal Rumble matches.

The revamped MyCareer and Universe mode are the main changes. While I feel Universe is far from perfect, I do enjoy popping in and out of matches and events and leaving my mark on the product and seeing the fallout from my actions.

MyCareer however is a dumpster fire.  You start out being forced to create someone lame, and by winning matches and completing challenges, you unlock outfits and moves to make your character less lame. In theory that is  a great idea but the execution leaves much to be desired. When this mode was announced along with the return of free roaming,  I was excited. Smackdown VS RAW 2010 had free roaming in their story mode, so I was excited to have it back.

That was until I played it. NPC’s spout the same stuff every show(Okay Triple H, I won’t tell anyone you did the DX shtick for me….at every show) and I quickly found myself running from the parking lot to my match and vice versa. To top off the horrible mode, the load times between doing anything and your matches  is so horrendous that I quickly gave up on the mode.

Overall, the game is a mixed bag. A good roster and some new updates to the matches  lay the foundation for a great game, but MyCareer ultimately flounders the main single player point of the game….unless you’re like me and just love to play solo matches (or royal rumbles). With that being said, at the least I could recommend it as a rental, but only the hardcore wrestling fans should buy.