The Immersive Tech Zone at E3 2017 last month took up an entire corner of the West Hall. Lines of eager gamers wound through the aisles, waiting for their turn to don a headset and explore the next frontier of video games. Over a dozen Virtual Reality (VR) and Augmented Reality (AR) developers had their latest games and hardware on display, but the brightest light of all shone from an end-cap booth belonging to Game Cooks. This is our Video Game Spotlight for their newest title: VINDICTA. 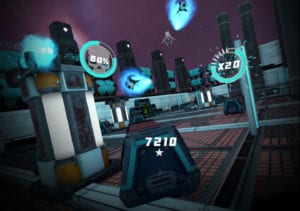 VINDICTA is a first-person shooter (FPS) game. There’s any number of games across nearly every platform in this ultra-popular genre, but this one stands out for a couple of reasons. First and most obviously, it’s playable in VR. The game goes one step further than simply being available on the newest gaming format though- it boasts an entirely new movement system. Players swing their arms to affect their character’s locomotion. The faster you swing your arms, the faster you move in the game. It’s not just walking vs running either- other arm movements will allow you to duck, dodge, kneel, crawl, and jump your way through each level. 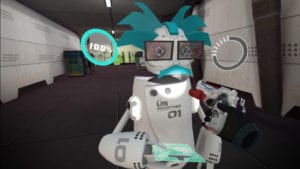 The premise of VINDICTA is also unique. You’ll take on the role of a human soldier known as Agent V who has been tasked with the mission of infiltrating the HN1 Facility, a massive research laboratory run by the evil corporation UB Industries. Once inside, Agent V must seek out and destroy an army of evil robots. Expect to encounter 13 different types of robot enemies, including one spider type that still haunts our dreams. Luckily, you’ll be armed with 14 different types of weapons to send those spiders (and other evil robots) straight back to the junk heap. You’ll cover 5 levels and get an estimated 6-8 total hours of gameplay. With the game still in early release, it’s possible that additional content will be added. 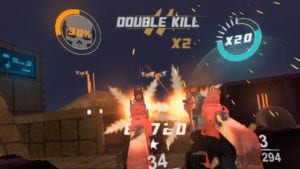 We could continue to go on and on about the game and all the reasons you should check it out, but sometimes it’s best to let the game speak for itself. Click below to check out actual gameplay.

If that video sold you as much as it did us, you can jump right into the lab today! The game is available now on Steam Early Access for HTC Vive for just $29.99. (If your VR system of choice is the Oculus, don’t despair. There are plans to port the game over to the Oculus upon full release.) If you’re already exploring the lab, let us know what you think!