Welcome back readers to my “Day Late and Dollar Short” review series. If this is your first time reading, what this column aims to do is review games/movies/music etc that either may have been missed previously on Fan Fest or have even been released way before Fan Fest existed. Last time, I reviewed the fairly recent WWE 2K18 for PS4 and the choice today is going to take us back almost 20 years ago.  The game in question? The first iteration from 989 Studioes of everyone’s favorite car combat game series:Twisted Metal. In Particular, Number 3. 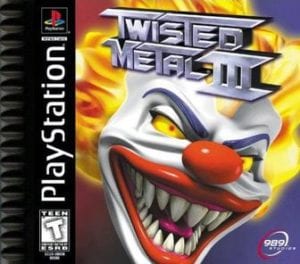 Since this is an older game,I feel it would be necessary to include a little bit of information about this title before we begin in case there is anyone who may not be aware of this series. The Twisted Metal Franchise has been around now for over 20 years, and revolves around multiple characters storylines revolving around the need to win the Twisted Metal Tournament.  The tournament itself revolves around car combat to the death, with the last one standing usually being granted one wish(usually ending in a dark result). This was the 3rd game in the series and was released Halloween 1998.  Released to generally mixed reviews, this game in particular seems to bear no middle ground: you either loved it or hated it. As a kid at the time, I loved it. I’d spend hours playing the game learning every nook and cranny in each level, memorizing cheat codes, unlocking extra characters and destroying friends when they’d come over to play(Remember, this was BEFORE online play. I’m old as dirt,you know).

With all that being said, I was extremely excited to revisit my childhood and dive back into this game and boy, has it not aged well.  The first thing, I noticed is of course, the graphics. Standard Definition and blocky, with glitches and screen tearing everywhere, it caught me off guard for a moment. The graphics have not aged well but in the end, what should matter is the gameplay,right? 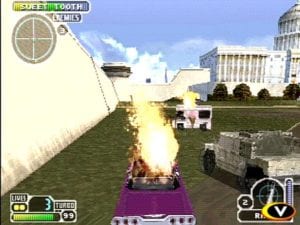 Well…That hasn’t aged well either. I played it on the Dual Shock 1 Controller. For those who don’t remember, the Dual Shock was not the original controller that released for the PlayStation.  When PS1 was first released it was released with a controller without rumble features and analog sticks. In May 1998, the Dual Shock was released and games quickly got more intuitive and easier to control. In the 6 months after the release of the controller, 989 was apparently unable to add DS support, and playing this game after 20 years of DS, it makes this game super clunky to control. The first round I played in 20 years consisted of me getting bombarded with rockets and specials for the first minute as I frantically moved the analog sticks to no avail. It was only then I figured out I was confined to the D-Pad. The lack of full 360 degree control doesn’t seem that much of a detractor unless you’re playing a game like this. To turn all the way takes a little bit longer, and when you have Spectre or Sweet Tooth on your tail launching heat missiles at you time is one extra thing you cannot afford. Also, in some of the later levels which require a little more precision to cross bridges…..well, expect to fall off…MULTIPLE TIMES.  The North Pole level used to always be one of my favorites but now…not so much.

Speaking of levels they are still for the most part enjoyable. Whether it’s the confined streets of London, the front yard of the US Capital building, or the catacombs of Egypt each level has a different feel to it that still stands out to this day.  Also of note, this game had one of my favorite soundtracks of all time, and  after replaying it, that thought still stands to this day. I don’t know how and I don’t know why, but the songs of Rob Zombie and fight to the death car combat just mesh so perfectly that even 20 years later, the soundtrack is still a standout.  Also, if you have any friends to come over, the multiplayer is still fun.  I had a friend over and while he killed me in every single round, it was still fun to play…rigid controls and all. Honestly, that’s why these games for the most part stand the test of time, and it’s quite shocking that we haven’t had a new Twisted Metal in close to 10 years, especially with online multiplayer being more important than single player to some(but not me) and the ever-growing power of game systems. While at times, the trip back in time to play TM3 could be painful, it was still a great reminder of just how much technology has grown in 20 years.  With that, I will rate Twisted Metal 3 a updated score of 5.8/10. 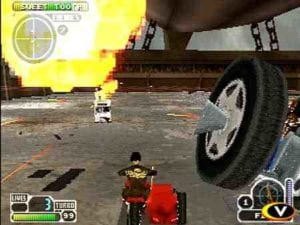 Did you use to play Twisted Metal? Who were your favorite characters to play? Any favorite memories playing the game? Share below or tweet me at @cjcnov88 on Twitter and let’s talk Twisted Metal!