Walker Stalker Con San Francisco 2017 was a star studded event. I’ve been to three other Walker Stalkers and have always had a good time and this was no exception. San Francisco is a small event for Walker Stalker, having about 7,000 attendees over the course of the sold-out weekend. The largest one is always in Atlanta every year- close to where The Walking Dead is filmed.

Cosplay is one of the big parts of the Walker Stalker events. I love the creativity of all the costumed attendees! 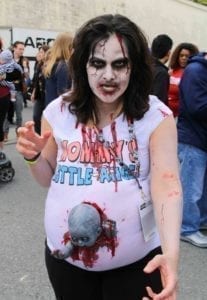 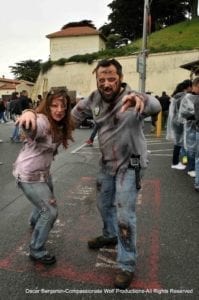 Saturday was a busy sunny day at Fort Mason for the convention, but sunday brought buckets of rain. The enthusiasm was not crushed though, as the fans flocked to the outdoor panels, and to the stars themselves, despite the weather.

Even though he is the guy we all want to hate, Jefferey Dean Morgan, our charismatic bad guy Negan, was the show stopper on Sunday. Fans just adore him, despite what he is doing to our favorite TWD family members

Thanks so much for the additional photos from my talented friends, Oscar Benjamin and Priscilla Kumar! Enjoy the slide show below!

Walker Stalker Con is a great chance for fans to get to meet their favorite cast members, get photos, autographs and experience awesome genre vendors. If you missed San Francisco and want to go to a Walker Stalker Con, you can still attend one in your area. Here is the full lineup of upcoming events below: