After the season 7 premiere of The Walking Dead aired; Negan became public enemy number one. While the audience knew it was coming, watching him slaughter both Abraham and Glenn was both heartbreaking and extremely unsettling. However, at the wrap of the episode, Negan wasn’t the only character on the show that fans were mad at.

Daryl Dixon has been a fan favorite since he first made his appearance fighting walkers and laughing at the naivety of the group he came across. He was rough around the edges and reserved but as the seasons have progressed, Daryl’s walls became obsolete and those ill-equipped strangers he met at the beginning have become his family.  Daryl fiercely protects the people that he loves and when Negan was on his power trip and resorted to teasing Rosita about Abraham’s death – Daryl lashed out.  While it was clear that in the moment he thought that if Negan were to retaliate, it would be directed at him, Glenn was the next to die and that made fans point the blame for his death at Daryl.

It goes without saying that The Walking Dead is a television show and the characters on screen do not accurately portray every emotion, action, or opinion of the cast members behind them, but after the season 7 premiere, that rational thought was lost on some viewers.

Ranging from foul language and name calling to threats of physical harm to both men, the situation after the season premiere escalated rather quickly.  While the majority of fans quickly stepped up to the defense of both men, some were relentless in their attempt to make their opinions heard and you have to imagine that both Norman and Jeffrey had a hard time reading some of what was said.

However, when it came to Walker Stalker Atlanta, Norman and Jeffrey were all smiles, filled with gratitude, and as compassionate as ever as they worked their way through photo ops, spent time at their autograph tables, and answered questions at panels over the weekend. While some celebrities may have kept guarded, met fans with a bit of hesitation; Norman and Jeffrey embraced the process with open arms and made every single fan in attendance feel like they were the stars of the show. 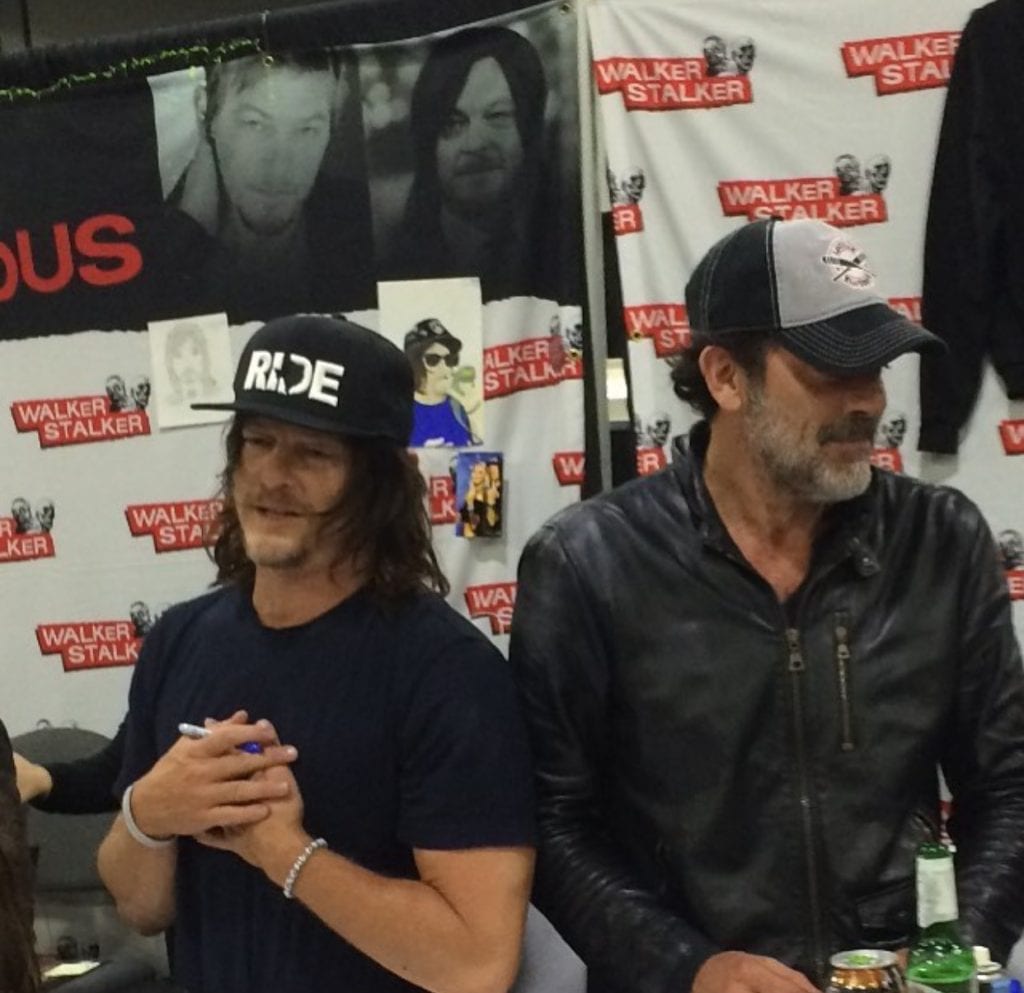 Not only did the pair work through their breaks and never lose their smiles in the process, they stayed after convention hours to make sure they were able to take the time to meet all the fans who waited in line for them.  Norman delivered pizza to some of the people waiting for him and the duo even joined forces to sign autographs for fans together which made the experience all the more special.

When crying fans approached Norman and Jeffrey, they spoke with them until they were calm, when fans wanted to speak to them for a moment instead of being rushed through the line, both men took their time listening and appreciating the fan in front of them and when sad fans needed a bit of comfort, Jeffrey and Norman offered it.  This comfort came in the form of laughs, smiles, embraces, and understanding, even when the fans were angry at the characters Norman and Jeffrey played.

We experienced the thick of this as we waited to meet both Norman and Jeffrey and spent time walking by their autograph tables through the weekend. Hour after hour and fan after fan, their smiles stayed bright and their energy stayed high which made everything more fun and memorable for us all.

It is easy to sing the praises of the entire cast of The Walking Dead, they all take this experience just as seriously as the fans do; but during Walker Stalker Atlanta, Norman and Jeffrey stole the show and stood as a solid reminder that we are a family, and that means doing everything we can to make one another happy.