Geeklings, we only have two weeks before the midseason finale of The Walking Dead. Is it me or has this season been moving pretty fast? I think it has a lot to do with the change in story telling. This week news circulated that ratings have hit a four year low for the show, which is something that should have been expected after the murder extravaganza premier. Viewers don’t like it when their favorite characters get killed off, and they especially don’t like it when two of their favorites get killed off in the same episode. I wouldn’t worry about the ratings though as the show has already been picked up for an eighth season, and I would argue that despite how low the ratings dip, that AMC isn’t letting this cash cow go any where. In a world without Breaking Bad or Mad Men one can make a strong case for The Walking Dead being the anchor of AMC (although some might consider Better Call Saul to be a contender. Just saying. What?! Those two universes are linked any way!) The alarming part of this news, at least for me, is that the ratings have gone down while the show has told it’s strongest/most consistent story telling in years. I’ve read some of the comments circulating the interwebs and it does seem that there are some of you who are fed up with the character development and want to see the plot move forward, but I’m sitting here thinking the plot is advancing because of the character development. This season of The Walking Dead has juggled more moving parts then any other (mainly different locations) and because of that the writers had to shift in the way they present episodes. I would hope that when the show returns next year they find a way to balance out these different locations in the same episodes which is something that Game of Thrones does so well. This way fans can see all of their favorite characters in the same episode opposed to waiting until the show circles back to the Kingdom or Alexandria.

With that being said though, we do have a brand new episode to look forward to tonight and I think it’s going to be very Carl-centric. I thought last weeks episode was probably the weakest this season (even though those guns and Tara’s promise are going to be huge plot threads moving forward), and this week will see the return of Negan to our screens.  Love him or hate him you can not deny that the show is better every time he’s on screen, and think that Jeffrey Dean Morgan could be the shows first Emmy nomination (you heard it here first). As far as locations go we haven’t seen a whole lot of Negan’s compound and I expect that to change tonight. I’m using a little bit of my comic book knowledge here (I like to believe I’ve been very good about not spoiling things… it’s hard sometimes) so bare with me. As we can see from the trailer it looks like Jesus does not accompany Carl into the compound (and why would he? He’s just there to scope it out) but he also doesn’t  look like he talks him out of his mission to kill Negan either (I didn’t see Carl jumping out). I’m not really sure what Carl is expecting to happen here. That Negan is going to walk into the truck and he’s going to kill him no problem? As far as plans go it’s not a very good one and the chances of survival are minimum at best. Some might even say laughable. That’s always been Carl’s problem though; is inability to think things through. He is just a boy after all.

And while we’re focused on Negan’s compound for a second, is it possible that Daryl will get to speak this week? Is he still eating dog food sandwiches? Has he become Negan too? Can someone give him a shower and a hug? Please. 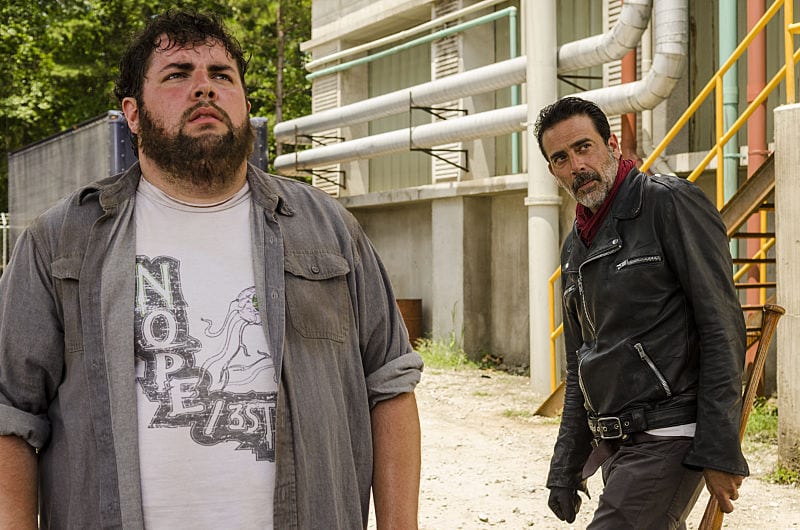 Meanwhile, Rick and Aaron are on a supplies run which could be the best thing for Rick right now. My man clearly has clearly got some suppressed rage issues going on right now, remember how he threatened to knock Simon’s teeth out and break his jaw? It was great to see that glimmer of the old Rick, it lets us know he’s not completely gone, but now we need him to exploit it. One of the best things about this season has been watching the tone of Rick shift from fearless leader to broken and condemned. At some point though we have to expect Rick to shake out of this. He’s Rick effin’ Grimes and he doesn’t take no shit from anyone. Maybe this supply run with Aaron will awaken that fire a little bit. Maybe while they’re out there they will discover something that will spur the revolution. Who knows perhaps it’ll be a collection of burnt mattresses or a fishing village stock piled with guns. One has to figure that Rick is a fuse waiting for a match at this point.

Last week I went on a tiny rant how I thought someone was going to die. Well, no one died (yay fantastic predicting skills!). So, does that mean I’m going to carry my prediction over to tonight’s episode? Actually, no, I won’t be. I don’t feel like anyone is in real jeopardy tonight. “But Kevin what about Carl?” He’ll be fine. I told you guys last week that Negan has some kind of perverse love for the boy and would love to turn him against Rick. That would be the icing on the cake. But with The Walking Dead those episodes where you feel like no one is going to die we end up losing a Dale or Tyresse. I guess we should stay on our toes, and I should stay away from predictions.

What do you think Geeklings? Tonight’s episode should set up the midseason finale as we start to understand the direction for the second half of this season. For those of you who have argued that this season has been a bit slow, could it be possible that all this development is setting something massive up for the second half? Things to think about. What do you think is going to happen to Carl? Will Rick and Aaron find the fishing village tonight? Sound off in the comments below, and as always you can find me on Twitter @iamgeek32 if you want to talk tonight’s episode or the season finale of Westworld (although be careful with that as I’m not watching until after The Walking Dead). Happy viewing!!

Home » Previews » Walking Dead Preview- What Are You Doing Carl?