Well, Tom Holland strikes again! His character may have fallen victim to Thanos’ snap, but Peter Parker still has a sequel to 2017’s Spider-Man: Homecoming to take care of, which means that there will be ample opportunity for Holland, aka Marvel’s biggest spoiler, to give fans the scoop – starting with the film’s title.

Holland took to Instagram while attending ACE Seattle Comic-Con to apologize to fans about the fact that there were “no real revelations coming out this weekend about Spider-Man 2″ and that he doesn’t know anything about it or how his death in Infinity War will come into play. In classic Tom Holland fashion, he then revealed that he just got the script and held up his iPad for everyone to see, which revealed that the sequel’s title would be Spider-Man: Far From Home.

We think that Far From Home is a perfect name and a great homage to the first film’s title Homecoming. It also provides a little bit of insight as to what to expect from the elusive follow-up, hinting that Peter Parker may be heading out of New York.

It’s uncertain at the moment where Far From Home will fit in the MCU timeline seeing that Parker died in Infinity War, but there is a high possibility that it will be taking place prior to those events. The details are, of course, being kept under wraps, but earlier this year we learned that Jake Gyllenhaal was in talks to star as the popular Spider-Man villain Mysterio, who uses his skills as a special effects expert to create illusions as distractions in order to commit crimes.

Marvel’s been known to use Holland’s loose lips to make announcements from time to time, including when they had him unveil the Avengers: Infinity War poster live on Instagram by having him pull it out of a folder that was marked “confidential”. 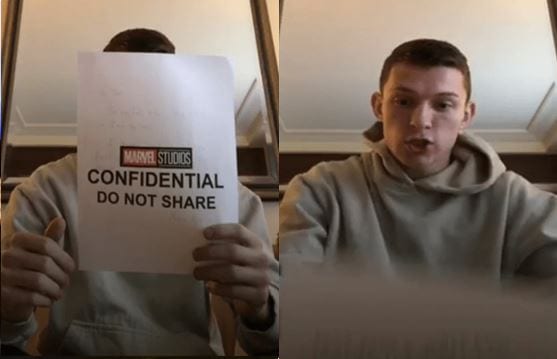 Most recently, Holland even spoiled the plot of Jurassic World: Fallen Kingdom to his Avengers co-star Chris Pratt, who is actually the star of Fallen Kingdom. The guy has a knack for spoiling and we love him for it and on top of that, we absolutely love the sequel’s name! What do you think of the title?