Some of our favorite panels are the ones where the actor’s characters aren’t on the same side, and that’s exactly what we got with our Troublemakers panel featuring Steven Ogg (Simon), Pollyanna McIntosh (Jadis), Austin Amelio (Dwight) and Michael Traynor (Season 5’s Nicholas). As a few of these characters begin to turn a new leaf, the four joined fans for an entertaining conversation where they reminisced and shared secrets and insight about their time on the show. 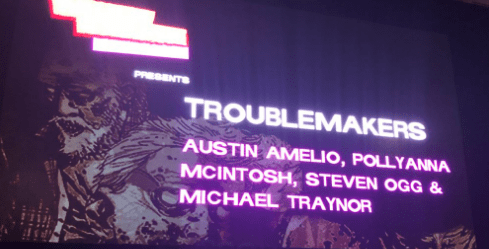 Last week’s episode of The Walking Dead “The Lost and the Plunderers” was a huge episode for both Ogg and McIntosh’s characters, so we made sure to really dive into their thoughts on the game-changing decisions that were made.

“We’ve tried Negan’s thing for a while and it hasn’t worked.” Steven Ogg explains why Simon has let it rip. #WSCLondonpic.twitter.com/nNyhX4SWg2

Simon has been having a little bit of a power struggle lately, as proven by his decision to completely gun down all of Jadis’ people, disobeying a direct order from Negan. But when it came to going back to the Sanctuary after their showdown, Ogg would’ve preferred a little bit more than a “smurf boot” to hint towards the actions that had taken place.

“We can get a Smurf boot but we couldnt get a cut on the face. (from Jadis)” @StevenOgg#WSCLondonpic.twitter.com/mldSesLvy6

Of course, the character who faces the biggest change of them all is Jadis, who was forced to watch all her people be completely murdered. She finally dropped her robotic facade and pled for help, but Rick decided to leave her in the junkyard, and in a heartbreaking scene she was forced to kill her friends who had reanimated. So, to say that she’s got a lot of emotion and revenge on the brain would be an understatement.

“It’s funny that you say Simon, Negan, or Rick because I’d say that it would be in that order, for sure. If I could get one through all of them that would be great.”

We’ve certainly gotten to take a much deeper dive into Amelio’s character of Dwight over the past couple of seasons and have learned that his wife Sherry has been a huge motivating factor in his decisions, so it would be terrible for him to find out that she didn’t make it after her escape from the Sanctuary.

If Dwight finds out Sherry is dead, “It will be a tough scene to shoot, because that’s what’s guided him this whole time.” -Austin Amelio #WSCLondonpic.twitter.com/VHybGQNqr6

While these characters will probably never be on the same team, we can’t wait to see what the rest of season 8 has in store for them!

For more of our Walker Stalker London coverage head to our Twitter account for live updates and be sure to check back here throughout the weekend for all of the amazing panels and behind-the-scenes action you may have missed!