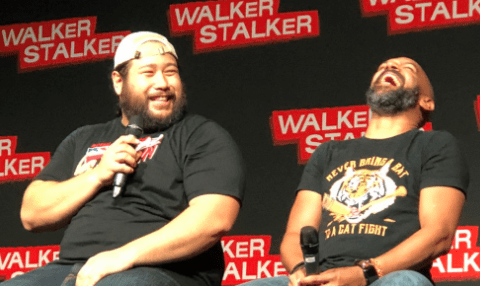 The two talked a lot about Shiva and how her death affected everyone on set. Khary joked that more fans cried when Shiva died than when every single human in the Kingdom was slaughtered. Those animals. They get ya!

On the loss of Shiva “We’re all still in therapy.” -Khary Payton #WSCLondon pic.twitter.com/7etrquy0N9

However, while Shiva’s death was heartbreaking for fans, it was the loss of the Kingdom army that certainly affected King Ezekiel the most. For most of season 7, Zeke had been extremely hesitant to get the Kingdom involved in Rick’s war against the Saviors, after all, he had the best business relationship with them and things had been going relatively smoothly thus far. So, now that things are in motion and aren’t going exactly according to plan, of course, he’s wondering if he made the right choice for his people.

“I think he’s still wondering, “Was this all worth it?” Khary Payton admits about King Ezekiel #WSCLondon pic.twitter.com/oa7zHXicMm

But Payton had no problem picking pick one person to blame for that brutal attack on the Kingdom Army.

“The truth is, if Dwight would’ve just told him there was a gun there…Ezekiel kind of kicked all of the ass up until that gun, which wasn’t supposed to be there. I think he just celebrated 5 minutes too early.”

In the long run though, up until Rick and Co. decided to start the All Out War, Ezekiel’s Kingdom was definitely the safest outpost to be a resident of.

“He kept his people alive longer than almost anyone in the apocalypse. Rick’s losing people left and right,” Payton said, and we have to agree!

Of course, it wouldn’t feel right to have a Kingdom panel without everyone’s favorite comedic relief- Jerry! Cooper Andrews took to the stage, taking a break from filming his upcoming movie Shazaam with Zachary Levi in Canada, and all felt right in the Walker Stalker world.

“It’s been a long time since we got to hang out, I miss you, dude! Payton greeted Andrews with, proving that the bromances are certainly real on The Walking Dead.

The conversation shifted over to whether or not there’s a romance for Carol and Ezekiel on the horizon, and while Andrews just learned what it means to ‘ship’ a couple, he wasted no time saying that he definitely ships the two together. Payton, however, was sure to tease the there was probably no possibility of that happening, but we like to think that was just pulling our legs.

Will Carol and Ezekiel ever get together? Khary says the ball’s in her court. #WSCLondonpic.twitter.com/j4fAufs5CW

Although on a show like The Walking Dead it’s hard to know if your character will even stay alive long enough to get to those kinds of storylines. Payton would just be utterly heartbroken if he was to ever learn that Ezekiel would be meeting his demise on the show, especially since The Walking Dead cast and crew become like a second family to all of the actors over time.

“It would be devastating to not be able to see all these people anymore. Like Chandler who I never thought would be gone. No ones safe here. That’s one of the reasons the show is so amazing. It tears your heart out every time.” ‬

For more of our Walker Stalker London coverage head to our Twitter account for live updates and be sure to check back here throughout the weekend for all of the amazing panels and behind-the-scenes action you may have missed!