To call the looming 7th Game of Thrones season ‘hotly anticipated’ would be akin to calling the ocean ‘fairly damp’ – if you’ve spent any time at all online in the past few months, chances are you’ll have encountered some variety of blog post, forum thread or meme created and shared by fans clamouring for this summer’s new episodes.

As ever, the hottest topics of fan debate concern the potential resolutions to several key ongoing plotlines, so here’s a quick summary of the leading fan theories as things stand…

Many people would undoubtedly love to see Jon Snow to take his long overdue revenge on the Nights Watch backstabbers (well, belly-stabbers) who pulled the ultimate double-cross on him at the end of season five. One way this could indeed play out is if Jon’s apparent reincarnation turns out to be in the form of a White Walker, which could be a handy method of helping to tie up a few loose ends at once, enabling several character arcs left incomplete at the time of Jon’s sudden ‘exit’ to get back on track. Plus it may even mean we get to see him leading the Army of the Dead to conquer all of Westeros, which – let’s face it – would be pretty sweet. No wonder this theory is one that simply refuses to die (a bit like our hero, perhaps…?).

If it transpires that Lyanna Stark and Rhaegar Targaryen’s much-hinted-at erstwhile tryst was how Jon Snow came to exist, in a birds and bees kinda way, then that would of course make his bloodline Targaryen – meaning he’d be the rightful heir to the Iron Throne. The clues pointing towards this one as a possible frontrunner have been loitering for about as the series itself; it’s been chugging along as a constant background rumble for the bulk of the show’s last few seasons, and shows few signs of disappearing just yet.

There’s a pretty well-established tradition of Targaryens ‘keeping it in the family’ when it comes to marriage. So, as it looks like the whole R+L=J thing did turn out to be true, then this in turn means that, technically, Daenerys is Jon’s aunt. Nevertheless, she’s clearly gearing up to marry someone, and many fans seem to think that someone might be our plucky protagonist. Hey, that sort of awkwardness never seemed to stop anyone in the George RR Martin world before.

Stannis is alive and well, and will claim The Iron Throne 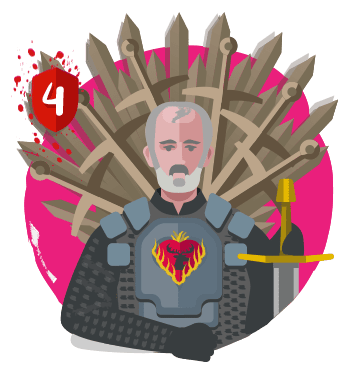 Despite pretty explicit assurances from various writers, the director, and just about everyone else that Stannis does indeed die when we think he does, it appears some people just aren’t quite willing to let him go yet. It would seem a (very!) long shot, but it’s theoretically possible that Brienne didn’t kill him and instead allowed her old Kingsguard allegiances guide her hand at the last moment. We doubt it, and we’ve more or less been told not to expect it, but hey – a dedicated minority are still clinging to this one like a limpet to a rock.

Game of Thrones follows a passage in the Bible

The Book of Revelation verses 12-19 has been cited in some quarters as a clear and direct influence on the general sequence of events in the Thrones universe thus far. Subscribers to the theory highlight the idea that Aegon survived the slaughter of the Targaryens and will restore the dynasty to power somehow, Daenerys is set to return to Westeros and cause havoc, and that Jon will indeed prove to have been resurrected as a punishment-dealing White Walker. There’s a whole Reddit thread that goes frighteningly deep into the arguments for and against this concept, which is certainly worth a look if you know your way around a Bible.

The possibility that Meera and Jon are brother and sister has done the rounds for a good while now, despite Ellie Kendrick – who plays Meera – having reacted to it with a fair degree of scepticism more than once. It’s certainly based on largely circumstantial evidence: the pair do look as though they could well be related, and the books indicate that both characters are exactly the same age. After Jon’s apparent resurrection and the shock reveal of what seems to be his true parentage, this would sure make for a hat-trick of zingers for Mr Snow…but, although the hype level indicates many fans would very much like it to be true, it’s not clear anyone should really be holding their breath on this one.

Cersei Lannister is expected by most fans to exert some fairly brutal payback for the taking of Kings Landing by the High Sparrow (and Cersei’s subsequent humiliation by his religious zealots). ‘CleangeBowl’ has effectively become the shorthand for a scenario in which Cersei pits a reanimated Gregor ‘The Mountain’ Clegane against Sandor ‘The Hound’ Clegane in a trial by combat. It would make for a great watch, for sure – and there have been multiple teaser statements made in recent months by some of the newer cast members about the imminent return of a much-loved character. Again, there’s a highly detailed Reddit thread backing this one up, and few seem to be arguing that it’s beyond the realms of possibility: this one could yet prove to be a canny outside bet.

HBO credits for the image and special thanks to Ashley Fleming for the theory and wording.