Geeklings, what a New Comic Book Day today has been, eh? All week long I’ve been counting down with the Russo Brothers as they’ve trolled us with their Facebook posts. I watched Tom Holland “accidentally” reveal the Infinity Wars poster and giggled with anticipation. I woke up early this morning and waited and waited aaaaaand waited for the trailer to finally drop, and when it did I lost my collective mind. Holy crap Geeklings. This. Is. Everything. Hopefully, you’ve tuned in to our coverage on all things Avengers because there are plenty of things to take away. For me though, my main take away is just how special and important this film feels. Taking ten years of the MCU and celebrating them with what seems to be one mega, kick ass, event. Not going to lie, I got goosebumps and may have choked up a little, but Black Panther saying to get Captain America a shield will do that to a grown man. You better believe that this is something I’m going to talk about in the upcoming episode of We Speak Geek which is being recorded tonight. Yeah, I know that was a real smooth way to slip in a new podcast episode plug. I’m good like that.

On top of all that we had actual new comics released today. And just like that, the day got even better. You want to break these things down? Of course, you do! Let’s do this. 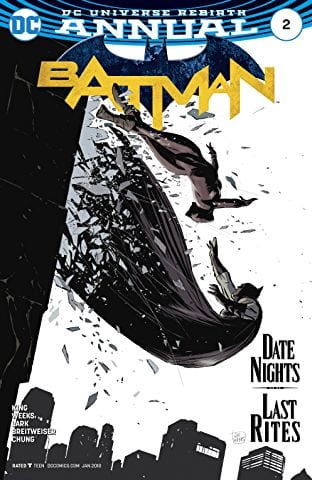 1. Batman Annual #2– It looks like we’ve reached Annual season, not my favorite time of the year as I feel annuals are excuses to jack up prices, but everything involving Tom King’s Batman run has been all types of stellar so I don’t mind so much. With Batman and Catwoman’s recent engagement it makes sense that we go back in time and witness the twos first date. Something that was alluded to during the rooftop issues. Tom King is creating something special here in his Batman run and as of right now I’m not sure if I believe Catwoman and Batman will actually get married. The question is what is going to keep the two apart and if things between them will ever be the same again. Just theories though… this is Batman we’re talking about. 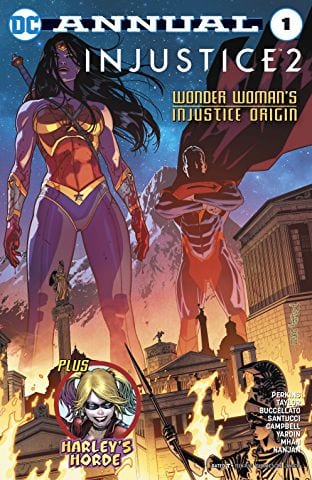 2. Injustice 2 Annual #1– The Injustice Annuals tend to be some pretty excellent comics that help to further expand the Injustice universe while introducing new threats or plot threads. One of the best things to happen to this series is the return of Tom Taylor and he’s been firing on all cylinders on this book. Seriously, if you’re not reading Injustice 2 then you need to change that. Immediately. This Annual looks to take a look at the origin of the Injustice Wonder Woman and how she got to be as aggressive as she’s been which has me believing her role is about to expand. A flashback before Superman kind of lost his mind, something we haven’t seen in a long time in the Injustice universe. 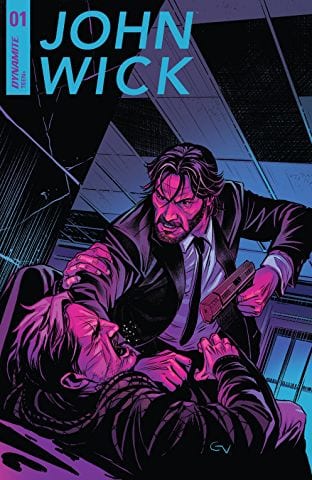 3. John Wick #1- Just so I understand. This comic is an origin story of sorts for John Wick. Before the movies. We get to watch him at the height of his hitman badassness? Before he falls in love and gets a dog? Geeklings, what more do I need to say for you to start reading this? 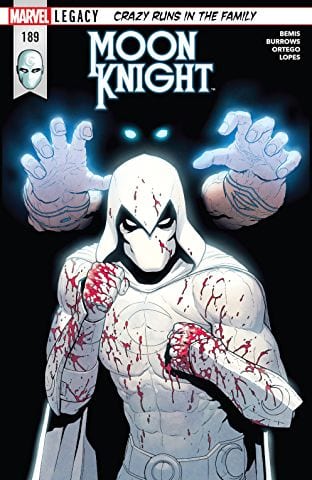 4. Moon Knight #189- First off, Moon Knight #189 wins my favorite cover of the week. This piece is gorgeous. It always surprises me that more people don’t read Moon Knight. I think he could possibly be Marvel’s most underrated hero. These books are dark, gritty, extreme, and brilliantly told. Now you’re giving Moon Knight an actual arch villain, okay, just make him an even more awesome character. Read a Moon Knight comic and have your face melted. Thank me later. 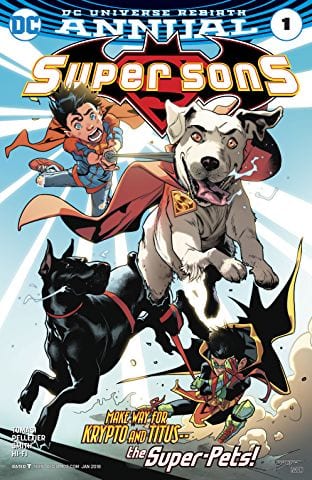 There you have it Geeklings, all the books you should be getting those geeky paws on. I know some of you are thinking, “where are the honorable mentions”, and you’re right, I left them off this week. Mostly because I wanted to talk to you guys real quick about digital comics. First things first, I want you guys to know that I love, love, love my local comic book shops. I think they’re important for the industry and important for fan bases. I mean, it’s a store you can go to and talk to friends and owners about comics. How could that be a bad place? But for some of us, local comic book shops are like an hour away which makes going a bit of a hassle. This was primarily the reason that I turned to digital comics, and honestly, I’ve loved the decision.

I’ve been reading comics for a long time and the transition to digital was a bit tough at first but if I’m being honest, I haven’t looked back. The books feel more cinematic as they shift from panel to panel directing you to speech bubbles, helpful for new readers, and help to fully immerse you in the books. You get the story without the filler. There are no ads filling up the book, just you and the comic of your choice. I feel that the art really shines within the digital format as well. The overall experience is just highly enjoyable.

And if you don’t believe me then check this out. I’ve got a fun little graphic, everyone loves graphics, breaking down the rise of digital comics. Give it a look over and see if you agree. I’m not telling you guys to ditch your local comic book shops. That’s blasphemy. I still go as often as I can because you can’t replace that atmosphere. What I am saying is if you’re traveling and don’t want to bring stacks and stacks of comics with you… then you might want to look into going digital. No pressure, but the trend is rising and this makes for an interesting read.

As always, if you feel like I’ve left anything off then, by all means, sound off in the comments below. I’m actually taking a brief vacation and will be back on the site next Wednesday, just in time for New Comic Book Day. In the meantime, look out for the newest episode of We Speak Geek or find me on Twitter @iamgeek32. Let’s talk Infinity War or comics or Mr. Robot or why the New York Giants broke my heart yesterday. Happy reading everyone and many huzzahs!

Would you believe that digital comics have an average of over 6 million readers each day? This comes as a surprise mainly because people can just watch videos showing their favourite comic stories. They don’t have to keep reading comic stories anymore.

The main reason is that digital comics make people feel like they are still reading actual comic books. It takes them back to the time when there were no animated movies yet or access to them was difficult. It also brings them back to the years when they had to buy comic books from actual magazine shops.

The idea that you can still read an actual comic book in today’s time when everything seems technologically advanced is surreal. However, this is the kind of feeling digital comics bring and this is why it has a massive appeal around the world.

Just give it a try and you will understand why people love reading digital comics. They can flip pages and see illustrations as they appear in comic books. There is a twist though as sound effects can be added and the images are way better.

Digital comics are for everyone. Younger audiences who were not born back when actual comics were popular can relate to it. Those who have read comic books before will feel nostalgic with the idea of reading comic books digitally.

You can find out how these digital comics started and read more information through the infographics below. You will learn a lot from it.

Images from DC, Marvel, and Dynamite