We start this week’s episode in London where Ethan waiting on Jackson so they can celebrate their anniversary. He’s pretty upset with Jackson for being late when the door is thrown open. Two Hunters appear with Jackson in tow. Ethan is shot by a wolfs-bane dart. Unfortunately for the Hunters, Jackson’s inner kanima comes out and he knocks them both out. After a little bit of question and not really answer, they determine that the Hunters were sent by Gerard. Looks like their next stop is Beacon Hills.

Meanwhile, it looks like Scott and Malia were the only ones to come out relatively okay after the McCall house was shot up last week. Melissa is in surgery and it’s a close call. She even doesn’t believe that she’s going to make it. Scott takes some of her pain, and for now, it looks like she’s going to be okay. Rafael is okay and has been called into the office. Mason and Lydia are also alright. Scott decides that the only course of action is to recruit his own army.

He and Malia meet with Deucalion, who tells Scott that the only way to stop Gerard is to kill him. Scott asks for his help, but Deucalion has sworn off violence (of course). Next stop is dear old dad as Scott and Malia approach Peter Hale. He also recognizes that there is no way Scott is going to be able to end this without shedding some blood. Peter doesn’t agree to help because he doesn’t want to be brought on to do all the dirty work.

While Scott and Malia try to built an army, some investigations are underway to find out who shot up the house. Noah calls Tamora into the station. He knows she wasn’t directly involved in the shooting, but she most likely knows who did it. He tells the stories of Gerard over the years and how he is only out for himself. He tells her that Scott has only been trying to help, and could’ve stopped the Beast sooner if Gerard had revealed how to kill it sooner. However, Tamora turns the tables on Noah, saying that all she can see in everything he’s shown and told her is a struggling police chief. A station that’s in way over its head. His incompetency and lies have led to this war. Noah asks one of his deputies to escort Tamora from the building, but the whole station has been turned against him.

Liam and Theo go after Gabe, believing that he was a part of the shooting. Liam aggressively interrogates him, smashing Gabe’s face into a mirror. Theo pulls Liam off of him, saying he doesn’t want to put in the effort to hide the body. Gabe makes a comment about a bunch of bodies, and then it’s Theo’s turn to push his face into the glass. Gabe takes them to a freezer where three student’s bodies have been stored. He says that they were tested much like Corey was to see if they were werewolves. They were, but they didn’t die because of their wounds. Something else killed them.

Liam and Theo put two and two together and determine that the Anuk Ite is searching for its other half. That’s what the spiders crawling out of things has been (gross). And that other half is inside of a werewolf. The person that has been suggesting werewolves for target practice is Aaron. He is one half of the Anuk Ite. 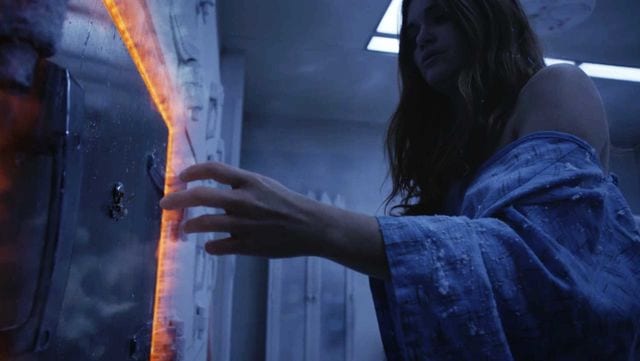 In order to try and convince Peter to join their cause, Malia lets him tap into her memories of when they say the bloodied Anuk Ite a couple of episodes ago. The whole ordeal spooks him, but it’s still not enough to get him on board. Malia suggests to Scott that they recruit a group of werewolves that live away from society. But when they show up at their hideout, they’re all dead. Then they run into Lydia, who has been having visions since waking up in the hospital. She believes that the dead Hellhound Halwyn is trying to lead her to the truth. They discover a body of a dead werewolf in the woods that is a member of the primal pack and all his skin is gone. They also put the pieces together and determine that the Anuk Ite is searching for his other half, and that’s a werewolf.

Peter shows up, saying that the Hunters tried to kill him, destroying both of his precious cars. He and Malia have a little talk afterward in which he tells Malia that real reason why he has agreed to help. He saw something else in her visions and warns Malia not to fall in love with a dead man. Malia’s response is “Too late.”

The end of the episode finds Jackson and Ethan rolling into Beacon Hills. Unfortunately, the first person they talk to is Tamora. She captures the two and starts torturing them to learn why they are looking for Scott.

A lot happened this week. We have a partial reveal as we learn one of the identities of the Anuk Ite. Aaron has been acting a bit weird lately, so his reveal isn’t that out of left field. I’m really curious as to who the other half is. Liam might be a candidate just because of the effect that the Anuk Ite’s presence is to him. He hasn’t been in control of his powers, so maybe there’s something more going on than just the amplified fear.

I’m excited for Jackson and Ethan’s return. The opening fight scene was really hilarious with Jackson throwing the Hunters around and ransacking the apartment as Ethan lamented all their broken artwork. Hopefully they’ll be able to get away from Tamora. Their reunion with the rest of Team Wolf will be interesting.

Three more episodes remain, and all of the pieces are on the board. As we get closer to the finale, I can’t help but wonder where Stiles and Derek are. We haven’t seen anything at all of them since the last 5-10 minutes of the mid-season premier. You can’t open with a mystery like a massacre and fleeing Derek and not explain it at all. Hopefully they’ll appear next week and then everyone will be together for the series finale to defeat Gerard and the Hunters.