Chapter 18 was quite a roller coaster. Betty began bartering with Black Hood, Veronica’s past came back to bite her and Jughead became an official member of the Serpents. But more importantly, Bughead ended.

Black Hood didn’t kill Nick St. Clair, but because she did what he asked, he knows he can count of her. But Nick is being questioned by Sheriff Keller about what he did to Cheryl. Mrs. Blossom doesn’t want to press charges because “nothing really happened” to Cheryl.

Mayor McCoy, after hearing about Nick’s party, raids South Side High, looking for Jingle Jangle. Archie, knowing about the raid, gets Jughead out in time, but now he is being asked to fully commit to the South Side and to play nice with the Ghoulies because the North just declared war.

Black Hood wants Betty to find the Sugarman. She consults Cheryl because Mr. Blossom was the Sugarman’s dealer. Not getting anywhere with her, she consults Sheriff Keller. After speaking with him, Betty sees Veronica, apologizes and tells her everything. She then asks for Veronica’s help in taking down Black Hood.

Jughead and Archie go see FP for help. He tells the boys to challenge them to a street race and to avoid bloodshed at all costs. Whoever wins, controls the South Side. 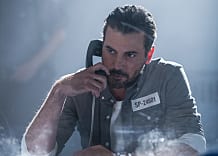 Betty and Jughead are working on the Serpent street car and she tells him why she broke up with him. Unlike Veronica, he doesn’t seem to believe Betty.

Archie and Jughead face the Ghoulies in the race. The race ends quickly, when the cops show up. Good thing Archie hit the emergency brake.

Cheryl confronts her mother about Nick and the Sugarman. Mrs. Blossom tells Cheryl everything. The Sugarman is Robert Philips, the English teacher at South Side High.

Black Hood calls Betty asking for the Sugarman’s name. She tells him to read it in the paper tomorrow. It’s her game now.

Bughead lives! This episode was action packed and I’m not going to lie, I loved the Grease-like street race. Cheryl made that scene with her Chacha-esque sass and yes, Madelaine Petsch was born for that kind of drama. With the Sugarman caught, Nick and his family out of the picture, and Bughead reunited, hopefully things will start looking up in Riverdale. Betty just needs to take care of Black Hood.