Chapter 15 saw Pop’s Diner rise once again but Fred’s shooter is still on the loose. Kevin was “jogging” at Fox Forrest when Midge and Moose were shot. They both survived, luckily. Archie has a feeling that there is someone terrorizing Riverdale. He even pledges to start a watch group to look out for the citizens of Riverdale.

Jughead is fully immersed into South Side High. He meets Toni Topaz and gets the grand tour of the place. It’s made immediately clear that he doesn’t fit in. He doesn’t want to be a part of The Serpents, he just wants to write for the school paper. 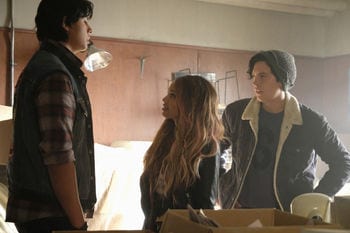 Veronica invites the gang over to her place to watch The Bachelor and meet her father. Hiram is pleasant and seems to really be trying to be a part of Veronica’s life. He even invites Archie to dinner. Veronica is skeptical.

Betty’s mother received a care package from the man who shot Fred. He calls himself “Black Hood” and admits to shooting Fred, Moose and Midge, and to killing Miss Grundy. He says he attacked them because they were not innocent: an adulterer, drug and sex addicted kids and a child predator.

Polly is freaking out because her mother printed Black Hood’s letter and she thinks he would be after her next. She leaves without telling her parents.

Jughead is working late on the school paper an Betty decides to visit him. There she meets Toni and there are some jealous vibes floating in the air. When he leaves later that night, he gets jumped by some high school jerks. He tells Betty that it was a motorcycle accident. He’s reconsidering joining The Serpents.

Archie goes over for dinner at the Lodge’s. Hiram invites Archie into his private study for some Rum. Hermione taunts Veronica because she isn’t allowed in there. She is really becoming a pain. Otherwise, the dinner seems to go fine. 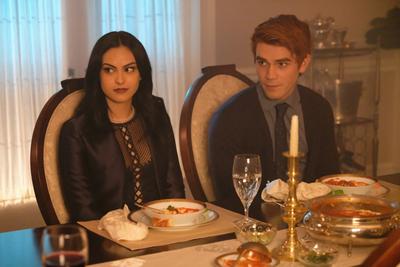 Betty is determined to make amends with Kevin, who has been sneaking off into the woods to do god knows what. She keeps harping on him that it isn’t safe. He meets a man and Betty’s warnings must’ve gotten to him because he immediately envisions the guy stabbing him. He heads home.

The episode ends with Archie going full Liam Neeson in a threatening video calling out the Black Hood.

This episode was really awesome. I always like it when shows explore the secondary characters. And hello Toni Topaz! I am so excited to see how she fits in to the story line. See you all next week!

Home » Uncategorized » ‘Riverdale’ Recap ‘Chapter 16: The Watcher in the Woods’