In Chapter 14 we learned that Fred was going to be ok after being shot at Pop’s Diner. We also learned that Miss Grundy was killed and that Hiram is back in town now and Veronica is not happy.

Now Pop’s Diner is in trouble and Betty and Veronica team up to save it. Jughead wants to help, but FP is his top priority. FP gets a plea deal and if he doesn’t take it, he could get up to 40 years. Juggie is scared.

So is Archie. He admits that he hasn’t been sleeping so he can protect his father. He even asks Reggie if he has anything to keep him awake, something strong.

Mayor McCoy is very unwilling to help because of the possibility that someone else could get shot… Wow. So Betty and Veronica brainstorm how to save Pop’s. 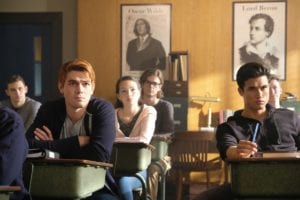 Archie learns of Miss Grundy’s death and asks Alice Cooper to help see if the two crimes are aligned. Alice says it’s unlikely but Archie wants to be sure.

Betty and Veronica learn that an anonymous buyer is buying Pop’s. Veronica quickly goes to her dad to see if he is behind it (he is). He denies it and denies hiring someone to shoot Fred. She doesn’t know who to believe.

Bughead goes to see Cheryl and her mother. They ask them for forgiveness since FP didn’t kill Jason. Mr. Blossom did. Betty tells Cheryl that she’ll testify and if she doesn’t, Betty will release the video of her father killing Jason. Cheryl comes through for FP and Jughead. Her testimony leads to court to reevaluate FP’s case.

It turns out that a liquor chain is buying Pop’s. There isn’t anything that can be done. Well Betty is going to change that. 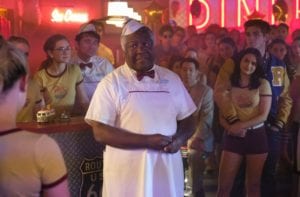 She hosts a Retro Night. It’s successful and Pop’s gets to stay open!

It was truly a night full of victories! That is, until Archie is seen buying a gun from Dilton and two students are shot in their car…  Only in Riverdale…