Election season is heating up. Betty and Jughead are running for student body president against Veronica and Archie and Reggie and Josie. Archie is at a crossroads yet again, though, his father is running against Hermoine Lodge for Mayor of Riverdale but he has pledged his loyalty to the Lodge family. Sweet Pea is leery of Betty. He and the rest of the Serpents believe that she’ll bail like her mother did, thus losing Bughead the Serpent vote.

Not so agent Adams takes out Andre leaving the Lodge family and Archie unprotected. Hiram says he isn’t going to risk his family’s safety, but Archie has something better in mind. Archie gets Reggie to help him create the “Dark Circle” to send a message to Hiram’s “friends.” Hiram, impressed with Archie, buys him a car. 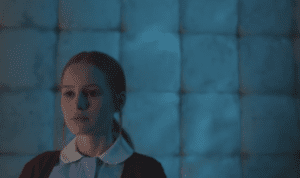 Where is Cheryl? Penelope has been telling people that her daughter transferred to a boarding school in, but everyone knows that isn’t true. Toni is incredibly concerned because Cheryl’s social media has been too quiet for fair play. Cheryl is undergoing intense physical therapy at the Sisters of Quiet Mercy, the place where Polly was sent off to when she was pregnant. Josie, Veronica, and Toni barge into the Blossom residence to grill Penelope on where Cheryl is. Penelope reveals that Cheryl was obsessed with Josie to the point of possible violence.

Nana Rose knows something is amiss and calls Toni to tell her that Cheryl is not far away. Claudius finds her but not before Toni gets the message. Toni and Veronica enlist Kevin to help them get to the Sisters of Quiet Mercy. At night, the girls head down the tunnel to the main building while Kevin waits behind. Toni finds Cheryl in the movie room and they make it out before the nuns can stop them. 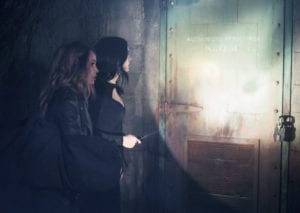 The police find a car in the lake. It’s the same one that Bughead “got rid of.” Everyone is freaking out. They enlist Kevin as a source and Kevin reveals that the car was stolen from a Riverdale resident. Chic says that the car belongs to Dwayne’s (the dead drug dealer) girlfriend, Darla. Chic offers to move out so Betty can move back in so Hal doesn’t suspect a thing.

Chic finds Darla and brings her to the Cooper house. She agrees to keep her mouth shut if Chic gives her the 10k he owes her. Betty is sent off to get the money and while she’s there, Darla and the hostel manager takes over the house. Betty calls the Serpents for backup and they scare the thugs away. Alice announces that she is done pretending that she isn’t a Serpent and vows to stay on their side.

I loved this episode! I’m very anxious to see who will come out on top of the student election: Bughead, Varchie, or Rosie? Same with Andrews vs Lodge. Anyway, I loved how the Serpents came to Betty and Alice’s aid with the thugs. This just proves the strength of the Serpent family and that unity is one of the best things about this show. Cheryl’s escape kind of reminded me of Girl, Interrupted in a way, but I am so ecstatic that she’s out of the nuthouse and that she and Toni finally kissed! I am also so glad that Cheryl brought up Carrie: The Musical. She may be the perfect Carrie White, but Kevin’s face when she said the school is going to burn was absolutely priceless. The Carrie episode airs April 18th on CW.