Everyone is scared and Archie’s video doesn’t help. The Lodge’s don’t want Veronica to date Archie and he’s getting suspended because of it. He’s not letting up, though.

Betty receives a letter from Black Hood. The letter says that she inspired him to take out the sinners. He also sent a code for her to decipher. Apparently he’s making a game out of who he kills next.

Jughead is researching murderers and he and Toni try to crack the Black Hood’s code. He let one of Betty’s phone calls go to voicemail… Juggie, what are you doing?

Naturally Betty wanted to work on the code with Judhead and upon hearing that he’s already working with Toni, she suggests that they have a code cracking party. It ends early when Betty makes a comment that throws Toni into a fit of North vs South talk. 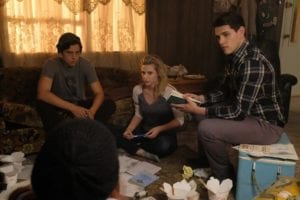 Veronica feels bad that Archie lost his followers and gets the whole school to support him by wearing red circle shirts. Feeling more confident about things, Archie goes to the South Side and tags a giant red circle on a building, scaring off some serpents in the process.

The next day, Sheriff Keller searches Archie’s locker the next day and although he doesn’t find a gun, he does find Reggie’s black hood. Betty left some books at Jughead’s place and he sees Black Hood’s note. He tries to get her to see that just because she inspired the killer, she is not a bad person.

Hermione ironically lectures Veronica on the dangers of blind loyalty. Later that night, she gets a call from Archie asking for his gun. (She knows what she’s doing Hermione, don’t worry.) She lies and tells him that she threw it in the river just as the football team asks to rejoin the red circle.

Just in time too. Serpents are at Archie’s door. They want Archie to know he messed with the wrong people. 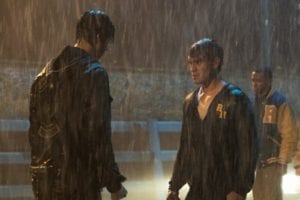 At the town meeting, Alice stirs the pot by saying the South Side is the real culprit. She’s driving the knife between the two sides. Bughead cracks the code and the Black Hood is coming to the town hall. They get everyone out by pulling the fire alarm.

Archie and Veronica agree that they need to get rid of the gun and toss it into White Water River.

Betty gets a mysterious phone call at the end of the night. It’s from the Black Hood.

I liked this episode a lot. It wasn’t the fasting moving episode, but it moved the story along and thank god Archie got rid of that gun! Hopefully one day soon, the North Side will realize that the South isn’t all that bad. But some things never change.