Chapter 19 brought the Sugarman’s reign to an end, best friends together and even had an awesome street race.

The town is still on edge after Black Hood sends a letter giving them all 48 hours to prove that they are sinless, or he’ll strike again.

Penny Peabody is finally calling in that favor from Jughead. FP was jumped by some Ghoulies and she wants Jughead to take a package to Greendale. If he succeeds, she’ll use the cash to help FP.

He asks Archie to help. They get a flat on their way to Greendale and a sketchy stranger offers to help. But he can only take one of them.

The stranger tells Jughead that he thought Archie was Jason. He also tells Jughead about the Riverdale Reeper. The Reeper shot an entire family once and no one is sure if he was ever caught.

Archie gets a spare and picks up Jughead and they deliver the crate. It turns out Penny “the snake charmer” Peabody lied about this being a one time deal.

It seems that FP made a promise to Penny that he didn’t keep, so his debts are now Jughead’s. 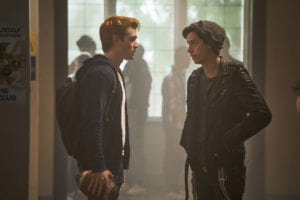 Josie feels like she’s sinning because she’s going behind the Pussycat’s backs by working on some solo music. Cheryl is trying to pay Josie back for saving her by helping her land a record deal. Unfortunately, the other pussycats find out. Black Hood has her scared and because of that, she forms a connection with Chuck when she asks him for a ride home. The stop for a little date first.

Mayor McCoy is upset because she’s been getting death threats, the last one, mentioned Josie. Josie has been receiving some weird gifts lately, probably from a secret admirer, and now she’s was given a very threatening letter along with a pig’s heart. Cheryl immediately thinks Chuck gave it to her. It wasn’t him. 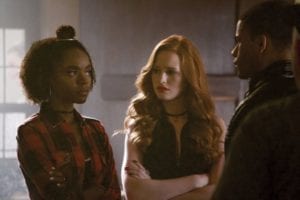 Veronica searches for evidence in Kevin’s basement and finds Sheriff Keller working out, nothing terribly suspicious until he leaves in the middle of the night.

Betty later breaks into the Keller household to search for herself. She finds Keller’s research on the case, including a black hood and gets caught. That doesn’t stop Betty and Veronica. They follow Sheriff Keller to a motel, where he is having a affair… with Mayor McCoy.

All three subjects of this episode find their way to Pop’s: Archie and Jughead, Cheryl and Josie; Betty and Veronica. Pop gets a call from Black Hood. Riverdale failed the test. 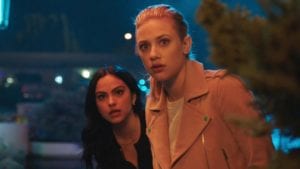 The format of this episode was interesting. I do like the multi-story format, but it does mess with the flow of the episode. That being said, it does work for this episode. The three story lines take place at the same time and it was great to see them come together at the end, even under the circumstances.

It is also interesting that Black Hood sent a threatening letter, and instead of laying low and being good, everyone seems to be sinning more than ever. I guess we’ll have to wait until next week to find out what Black Hood does next.