The long wait is over, Rick and Morty have returned! There was much rejoicing and “wubba lubba dub dubs” a plenty as Sunday night saw us pick up right where the April Fool’s Day premiere left off. In fact, I wasn’t home to watch the episode which means I turned to the Adult Swim website which crashed, and I wasn’t even mad. I’m just happy to be living in a world filled with Rick and Morty again. Needless to say though, I watched the episode at six in the morning because of the site problems but it didn’t stop these adventures from giving me the warm fuzzies.

The premier on April Fool’s Day was one of my favorite episodes of the series, and that’s saying something, and I was anxious to see how the show would pick up so many months later. Would this season feel like it had two season premieres or would we start to slip comfortably into the larger season at hand? The answer being the former as the episode picks up with the events of the premier lingering heavily on our characters. It’s funny, the separation of Jerry and Beth seemed like a foregone conclusion but now that it’s here I wonder if it’s actually what’s best for this family. 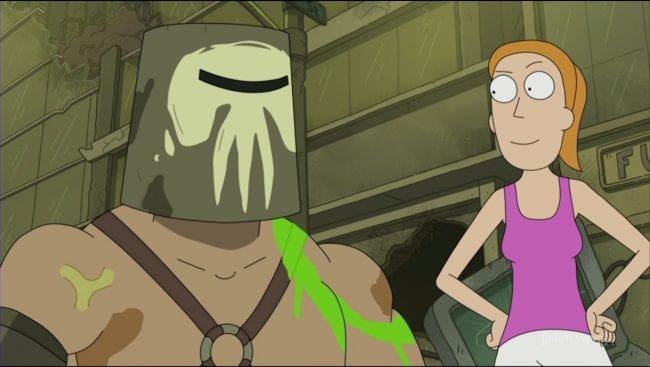 Take Summer for instance, who the impending divorce seems to be affecting the hardest, as she clearly blames Jerry for allowing this to happen and slips into extreme escapism in order to not deal with it. Her behavior within this Mad Max like world gets the encouragement from Grandpa Rick but also leads to Summer losing more and more of herself. Sure, it’s a blast killing mutants in an apocalyptic version of earth but at what point do you need to separate yourself from the Thrashers and focus on you? When Rick leaves the kids behind because he doesn’t want to deal with their emotions, Summer is the one who truly buries herself in this new reality becoming almost Tina Turner like in this Thunder Dome want to be universe. 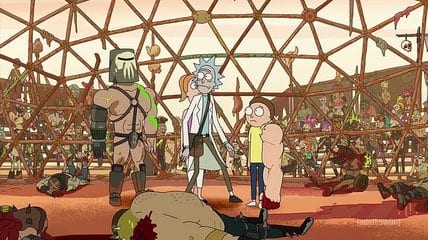 Morty doesn’t fair as well as he learns that he’s got some deeply repressed feelings concerning the separation of his parents or maybe his father in general. When Rick volunteers Morty to battle in the Thunder Dome, ummm Blood Dome, “save it for the semantics dome E.B. White” (my favorite joke of the night) to distract the savages from the fact that he’s taking their precious green rock, Rick transfers the ghost of a dead muscle arm into Morty’s weak and flimsy arm (what a wonderful sentence to write!). It seems that this ghost arm has a mind of its own set on revenge for the men who killed him and his family, and Morty learned through its destruction that he’s got some really dark views on his father. Like, really dark. Therapist needed dark. There were some deeply rooted hostilities pouring out with each death the arm delivered, and it’s clear Morty fears being as weak and useless as Jerry. We know that Morty doesn’t aspire to be Rick either but at some point, this kid is going to need a solid male figure in his life cause right now he couldn’t have more polar opposites. This type of behavior also reminded me a lot of Morty on the Purge planet in season two. The show has definitely hinted that while Morty is maturing that his adventures with Rick are tapping into something dark and possibly evil. Could there be an arc developing where Rick has to save Morty’s soul? You know, since he’s mainly responsible for its corruption in the first place. Or is he? Aww, geez Rick.

As for Rick, well he has no time for emotions. Right when the kids want to start discussing their feelings he leaves them behind to figure things out on their own. The whole key to getting rid of Jerry was to weed out the weakness from the family. To some degree, Rick just wants these mindless beings who will follow his every move which is why he invents robot versions of Morty and Summer.  On another deeply hidden level, Rick wants what’s best for Summer, Morty, and Beth. He’s just kind of a bag of d’s about it. Seriously, if the premier promised darker adventures it also seems that a darker Rick comes with that. The creation of the robot children doesn’t go as planned as robot Morty wants to live… or at the very least run through a creek or stream, and Rick learns that while he can create mindless robots he is unable to control the fact that they can become self-aware. Harder to control something like that opposed to actually dealing with his family. So Rick returns to the wasteland because he cares or whatever. You ain’t as gruff as you think you are Rick!

[Crazy Theory Time: What if the robot version of Morty that we see in this episode becomes Evil Morty from season one. The one with the eye patch! Think about it for a second, all robot Morty wants to do is live and Rick has suppressed that. Clearly, he’s become self-aware to a degree so what if by chance he’s turned back on and uses the portal gun to travel back in time, meet up with the Evil Rick, and hatch his master plan? It would make a lot of sense if you use the theory that Morty’s aren’t very smart. No Morty has ever been a leader and this would still hold true considering Evil Morty is a robot. He does have those USB port things hidden in his eye and his tone was very mono like he could have been a robot. I think there’s a lot of track to this theory, what do you guys think? ]

This episode ends with Rick returning the green rock and bringing a much more advanced society along with it. The Thrashers get electricity and a television to watch the Blood Dome tournaments with and it ruins Summer’s marriage with Hemorrhage (played fantastically by Community alum Joel McHale) as she refuses to turn into her mother and stands up for her happiness/self-worth. Morty helps the ghost arm achieve its revenge by killing the man who gave the order… sort of. The arm fails to fully drown the man and Rick helps Morty shoulder the burden by holding his now weak arm as the villain drowns for real this time. It was kind of the Dutch Rudder of murder, that’s for my Zak and Miri fans. And everyone returns to earth, not before Rick steals the green rock back though because #hesrick

Once home Summer has a change of heart and visits Jerry in his hooker ridden motel where the wind and the wolves constantly mock him (looooooser) and basically says eff it, life is life and it means nothing so who cares anyway. Morty, on the other hand, represses his anger and disdain for his father and sits with his mom to see how she’s doing. Granted, he thinks going to the creek or stream is weird but for now, Morty seems content to not deal with his emotions. A very Rick move. As for Rick, he stays consistent and acts like none of this has phased him. And who knows, maybe none of it has. But we know better. 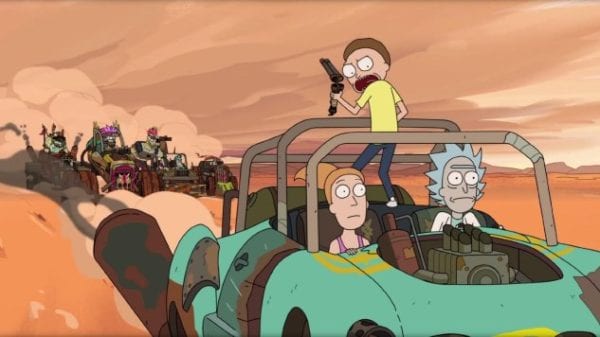 There you have it Geeklings, what did you think of the return of Rick and Morty? As promised our adventures are getting darker. Is it possible that the Smith family needs a Jerry or it’ll collapse in on itself? Do you think Morty is in danger of being consumed by his anger? Wouldn’t it be something if Rick had to bring Jerry back to the family because of the consuming darkness? That would be the darkest time line yet, a Rick that needs a Jerry. Sound off in the comments below with your thoughts and as always you can find me on Twitter @iamgeek32. See you next week for Pickle Rick, aaaaaaaand that’s the way the news goes!