Geeklings, I have watched the latest episode of Rick and Morty, “Rest and Ricklaxation” two times now. I tried for three but I couldn’t keep my eyes open. Don’t judge me! Game of Thrones took a lot out of me. All of that is beside the point though. I watched this episode two times and both times I had the same reaction, “holy crap, how am I going to write about this?!” Seriously, both times. I figured the second viewing would help open the door but instead it just left me there with my jaw a gap at the brilliance of the episode. I think when it comes to Rick and Morty I need more time to process the events of the show then say a Preacher or Game of Thrones because the magnitude of the depth that’s being explored. Don’t get me wrong, one of my favorite things in life is deconstructing an episode of Game of Thrones and rooting out all the plot threads and making sense of the history, but with Rick and Morty it’s different. This show hits on a more personal level and the emotional exploration of the title characters resonates in ways I didn’t think possible. Sometimes watching Rick and Morty is emotionally exhausting because the show is unafraid to tap into human behavior in the most honest, brutal ways possible. Yes, it’s hidden behind science fiction fun and dick and fart jokes, but underneath all that Rick and Morty hits on something very real and it can be unsettling at times.

Let’s look at “Rest and Ricklaxation” for a minute and explore the premise. The episode starts with the promise of a Rick and Morty adventure and only shows said adventures conclusion in the fashion of a Star Wars like celebration. While it seems that whatever happened in the course of those six days, twenty seconds for us, was epic, it really is a moot point. We’ve seen a number of episodes where Rick and Morty have defied the odds but that is not what makes this particular adventure special. What matters is what follows. Both Morty and Rick are emotionally spent. The two, after seemingly saving the day, have an extreme emotional breakdown where Morty claims he can’t do this anymore and Rick admits that he’s not in control and maybe is acting this way because he wants to die. A behavior we’ve witnessed in Rick before (*ahem* “Auto Erotic Assimilation” *ahem*). The fact that Rick openly admits this is a pretty huge step for a character who the majority of the time is emotionally stunted. We know that Rick has serious mortality issues but the fact that he’s risking his grandson’s life to deal with them just circles back into the whole selfish Rick persona that has been shining all season.

The two agree to take a vacation and head to some intergalactic spa to relax. Whilst there they go into a machine that removes all the negative toxins from their bodies and this is when the episode really starts to melt my brain. The toxins that are removed aren’t chemical but the negative aspects of their personalities. Not just the negative aspects but what they think are their negative aspects. For Rick, it’s the demon/bastard/mad scientist side. The part of Rick’s persona that mostly only cares about himself and the fact that he’s a “God”. For Morty, it’s his insecurities. The part of him that is always afraid and always doubting his ability and ways to function through life. This version of Rick is a monster and my immediate thought upon the transition to the toxic personalities was, “why is Rick being so mean right now?” And Morty, he’s a shell of what he has become and a clear whipping boy to feed the ego of Rick. Both are gross in their own way. 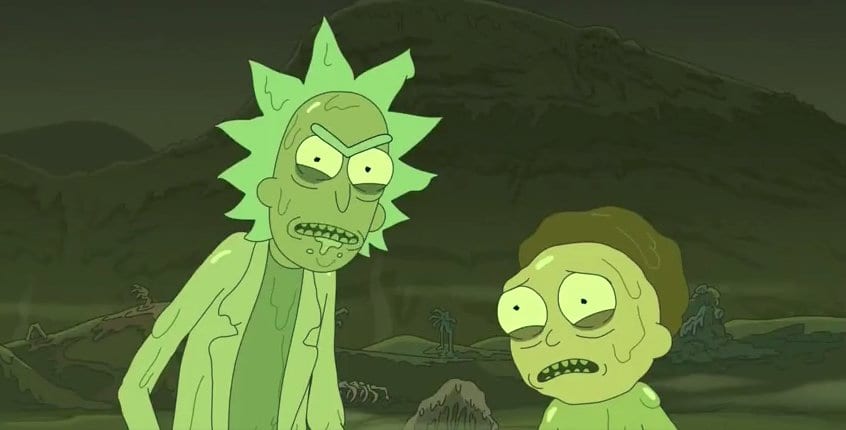 Now here’s where it starts to get all mind melty. These are the qualities that Rick and Morty hate about themselves. Rick, a character who thrives on his intelligence, ego, and his lack of emotions recognizes these traits as bad. Yet, he is unable to prevent them from coming through. Non-Toxic Rick is kind and polite. He even says “excuse me” after he burps. On the surface level this appears to be a better version of Rick. A version conscience of the idea of feelings and considerate towards others, but the episode takes a darker turn. And why wouldn’t it, it’s season three after all. When Toxic Rick tries to make the entire world toxic, Non-Toxic Rick uses his love for Morty against him. Not so bad, right? Yay love?Well, let that sink in for a minute. Rick views his love for Morty as a toxic trait. That’s awful. I think there’s a part of Rick, clearly, who believes that as long as he has an emotional attachment to Morty, that he can never achieve his full potential. In order to be the Rickiest Rick he needs to weed his love for Morty out. Brutal, right? In some ways, it’s comforting knowing that Rick does actually care for Morty but it’s ruined by the fact that Rick thinks it’s a terrible trait. Ugh, my heart.

As for Morty, well his toxic side removes his cowardice, lack of confidence, and his empathy. Our first glimpse of Non-Toxic Morty is kind of fun. Watching Morty act confidently and smoothly was refreshing… for a minute. The confidence game quickly over stays its welcome as we discovered that Non-Toxic Morty is a sociopath. Like legit. Non-Toxic Morty has no care for feelings or acceptance of problems. He doesn’t have time for it. It’s best left ignored because there’s so much of life to tackle, and the saddest part of all of this is, Morty believes that empathy is toxic because of Rick. The fact that Non-Toxic Morty is so batshit crazy is because Rick has impressed on Morty that feelings and emotions are weak. Removing the empathy from Morty and inserting the confidence and American Pyscho persona brought about a potential monster that could eclipse Rick himself. The most toxic aspect of Morty’s life isn’t anything that he’s feeling internally… it’s Rick. 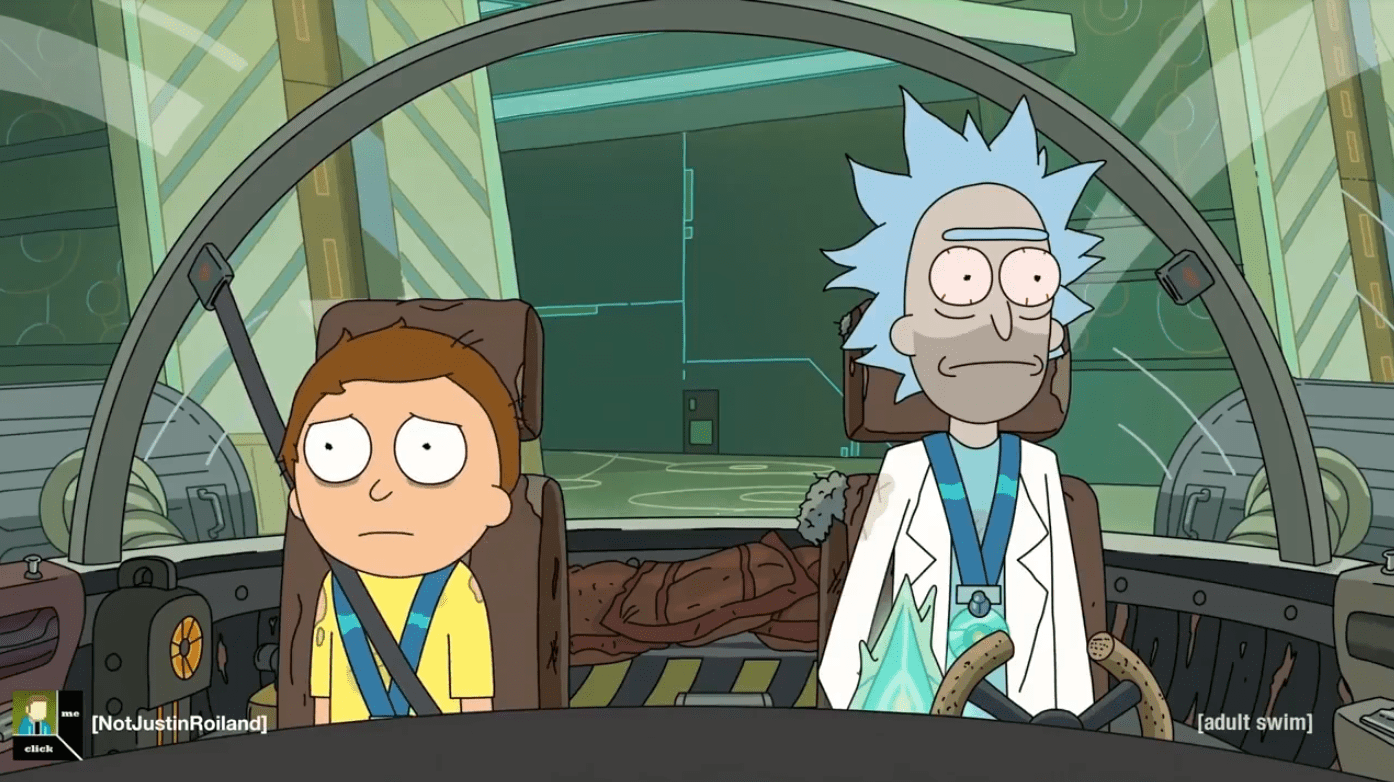 Yeah, let that sink in for a minute. The episode concludes with Rick and Morty being reunited with their toxic sides because it brings them balance, but the glimpse of Morty we see is frightening. What kind of impact is Rick having on him? I’ve argued all season long that the character showing the most growth this season has been Morty, but he does have some extreme anger/self-hate/resentment boiling underneath the surface. Bringing this version of Morty to the forefront so late in the season has me concerned for his future. I’ve said it before but Rick is a cancer, and even though he loves Morty, is that love something Morty actually needs? Is it possible to believe that Morty would be better off without Rick? What happens if Morty recognizes that Rick is a cancer? Is this how we get Evil Morty?

See what I mean now? This show makes my hair hurt in all the best ways possible.

What did you think Geeklings? Do you agree with Rick and Morty’s views of what personality traits are toxic? Do you think the best thing that could happen to Morty is a separation from Rick? What would Rick become without his Morty? Does anyone else feel that they’ll need a hug when season three ends? Sound off in the comments below. As always if you’d like to talk more Rick and Morty (yes please) you can find me on Twitter @iamgeek32. See everyone here next week, providing I can reform my brain from the puddle it became watching this episode.

Home » Featured » Rick and Morty Review- To Be Your Best, You Need Your Worst