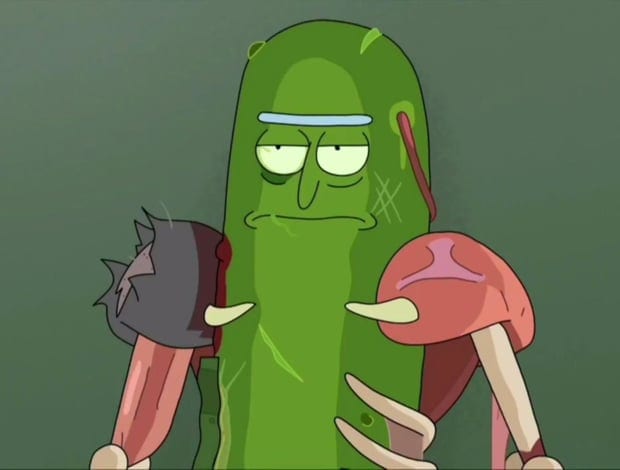 Ever since we got the tiniest glimpse of Pickle Rick back during the April Fools Day premiere this episode has been surrounded by hype. It was kind of incredible just how quickly Pickle Rick became a pop culture icon. Seriously, I’ve currently been waiting for a certain store to re-stock on an exclusive Pickle Rick t-shirt for what seems like forever, get on that Hot Topic, and I’m already hoping that we can get a Pickle Rick pop vinyl sooner rather than later. Think about it, with your anticipation for the episode how many times did you find yourself yelling, “I’m Pickle Rick!” aloud? Be honest with yourselves because my girlfriend can attest that it was done far too many times on my part. But that’s what I’m talking about. The bar was raised super high for this episode and when things like that happen one has to wonder if it’s even possible for the episode to live up to the hype. The good news is yes, “Pickle Rick” was not a letdown.

Let’s start off with this, turning himself into a pickle is by far one of Rick’s worst ideas. Yes, it’s blown up pop culture but what can one really do when they’re in pickle form? Not much really. That’s what makes this premise so fantastic. For starters, it wasn’t supposed to be a long transformation. Rick turns himself into a pickle in order to get out of family therapy because he’s selfish. This isn’t something we didn’t know already but it still is a bit disheartening to see the levels that Rick will stoop to in order to focus on himself. I really enjoyed how Morty was not impressed by the transformation, as it didn’t make sense nor seemed to have a big payoff, and was a bit annoyed with the fact that Rick cared so little about the families mental state that he would turn himself into a pickle. I was also happy to see Morty be the one to call Rick out on his plan for a timer to drop an anti-pickle serum at the precise time the Smiths were to leave for therapy. When Rick does things this overtly obvious though I can’t help but think that he wants to get caught. That he doesn’t know how to deal with his feelings and instead of dealing with them head on he’d rather that someone else force him into confronting his emotions. This way he can still crap on it but get the release he was hoping for. Or he turns himself into a pickle. Either or really. 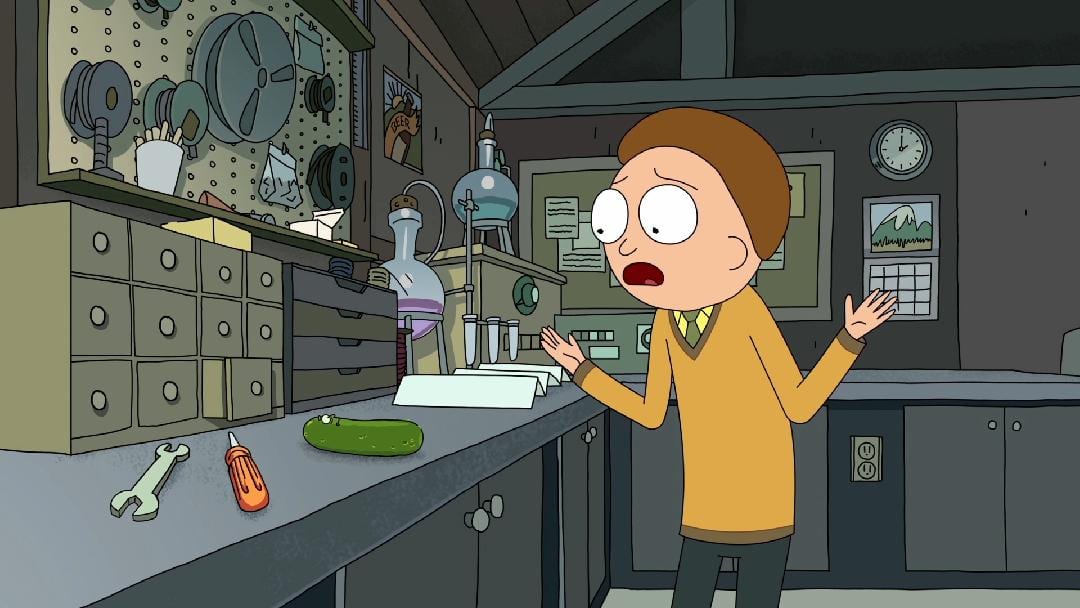 Beth actually takes the syringe filled with the anti-pickle serum and puts in her purse, and for a minute I was proud of her. It seemed like she was calling Rick’s bluff, “okay you want to be a pickle… be a pickle until we get back” but then things changed once the family got to therapy. Beth’s entire demeanor became super defensive, as she always is when discussing Rick and his behavior, and she was pretty crappy to Summer and Morty as she shamed them for being the reason why the family was there in the first place (Summer is smelling art supplies to get high and Morty is peeing himself at school… at least they’re not eating poop. Am I right?). While Beth may have her independence now that Jerry is out of the house it doesn’t make her a better person because of it. You would think she learned this from seeing alternate realities. In fact having Jerry around allowed Beth a focus for her negative energy and now with him gone it seems that Morty and Summer will be bearing this burden. I said it last week, and I’ll say it again right now, this house needs a Jerry! Everything is falling apart without him.

From here things really get bananas as Rick is knocked off his work station by a neighborhood cat which pleased me as I was never a big fan of these videos where people were using cucumbers to scare cats. This felt like a big win for the cat community. From here he almost died drying up in the sun, was carried down a storm drain by a passing rain storm, killed a cockroach to access it’s brain, developed some sort of cockroach suit by pressing his tongue on the insect’s brain, and used that suit to develop a better more advanced rat suit, and then used that suit to kill all of the rats. Seriously, that was crazy violent. Hysterical in the most disturbing ways possible though. But also just disturbing. Everything that happened in the sewer just goes to show that just because Rick is a pickle it doesn’t mean he’s not miles ahead of every other person, or in this case sewer dweller, at all times. Rick proclaiming that he “loved himself” before rocketing up through a toilet was both eye roll worthy and head nod approval worthy. Dude’s complex.

Then from here, things get even crazier as Rick finds himself in a building with heavily armed guards who have a folk story about a pickle that will come and kill them all. Seriously, this was a thing. Rick doesn’t let them down as he sets out to kill them all in a Die Hard inspired take down. Everything here was all types of awesome from Rick shaming the gangsters by putting their recyclables into the trash to his epic battle with the Danny Trejo voiced Jaguar. Pickle Rick kicked a whole lot of ass, brought down the gangsters, and freed Jaguar from his imprisonment. I’m sure this will circle back at some point. You don’t just kill a slew of mobsters and have it go away. The freeing of Jaguar seems to have already paid off as he arrived in the end tag to save Rick and Morty from being crushed to death by Concerto’s piano of doom. I don’t know about you guys but there certainly feels like there was more to this tag. 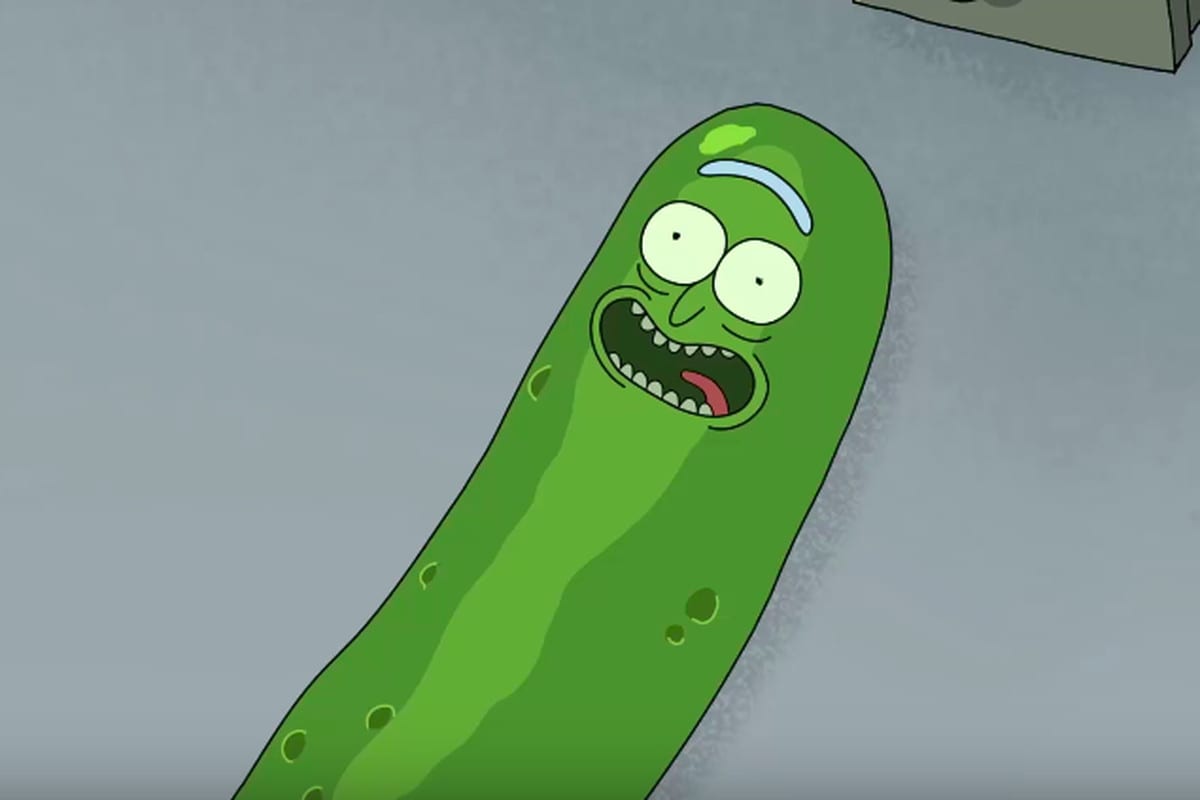 The episode ended with Rick finally arriving at therapy in part because he needs the serum to stay alive and partly because he understands that he should be there. What proceeds is a great test of wits between Rick and Doctor Wong (voiced by Susan Sarandon) where Rick confesses to turning himself into a pickle to get out of therapy while also stating that he doesn’t believe in it because he’s a scientist and looks to change the world when it doesn’t fit his needs. Which is pretty much what we’ve seen from Rick. He even calls back to the earth that he turned into Cronenbergs which is now the second time this has been referenced this season. I’m starting to believe that we are not done with our original earth and original Smith family members. Doctor Wong lays it down though by telling Rick that even though he doesn’t believe in therapy he’s still there and she no doubt thinks he wouldn’t benefit from the practice because it’s basic living. If there isn’t adventure or the risk of dying Rick isn’t interested. It totally felt that Wong zings Rick here and time conveniently runs out on the session leaving Rick unable to counter.

The episode ends with Beth and Rick wrapping themselves in conversation while ignoring the needs and opinions of the children and agreeing to go get a drink together. While on the one hand, this whole conversation is super selfish and classic Rick behavior it does have a silver lining as both Rick and Beth will be going out together to have drinks and talk. Something the two of them don’t ever really do. It’s progress in the most effed up way.

For the love of God bring back Jerry!

There you have it Geeklings! What did you think of “Pickle Rick”? Did it live up to the hype or did you find yourself a bit disappointed? Do you think the Smith’s need Jerry before they slip deeper into this black hole? Sound off in the comments below. As always if you’d like to talk more Rick and Morty you can find me on Twitter @iamgeek32. And thaaaaaaaaaaat’s the way the news goes! See everyone next week!