Spoilers ahead for The Flash #26.

This issue had the difficult task of taking the usual fallout that comes from a friend or family member finding out about a superhero’s secret identity and making it slightly more interesting. For the most part, it manages by leaning into the idea that Barry really is his own worst enemy.

Barry expects Iris to be furious with him, so he seems to misinterpret everything she says. Howard Porter was careful with Iris’s expressions in close-up shots, which makes a difference when we see the same moment twice. First, the reader sees Iris’s actual expression when she says Barry lied to her—she doesn’t look that upset. But when we see the moment as Barry remembers it later in the issue, she’s clearly furious. There are some strange art choices made in the issue (especially in the smaller panels where the expressions were not so clean) but these two panels really help sell Barry’s misconceptions about Iris’s reaction.

I also loved the new designs of the Tornado Twins during their brief appearance in a bad-future shown to Barry and Iris. I don’t expect we’ll see them again anytime soon (though if we do, hopefully not as villains) but their appearance at the start of the issue was great. They served as another weapon for Thawne to use against the Flash. Although I’m not sure it was necessary because Barry seems determined to break all on his own. It’s certainly a little understandable—the man is face-to-face with the man who has been torturing him for his entire life—but it really doesn’t excuse what Barry does next.

Even though Barry insists that they have no reason to trust what Thawne says, he is somehow surprised that Reverse Flash lies to him in the end. Barry agrees to trap himself in the speed force on the condition that Thawne will return Iris to the twenty-first century and leave her unharmed. The Flash really is his own worst enemy… because that was a truly idiotic idea. 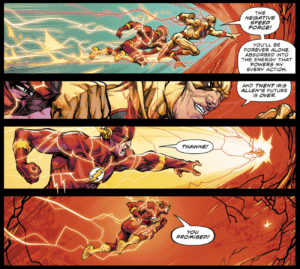 Barry might be the fastest man alive (I think?) but he definitely needs to slow down and think more often. If he had taken even a second to listen to Iris and understand what she was actually trying to say, he wouldn’t have gone into the Negative Speed Force. Now it seems the Flash is going to be the first iteration of Rebirth’s “Black Flash”. It’s also a testament to just how insane Eobard Thawne is that Barry’s transformation makes him positively giddy.

After the last issue felt like a way for new readers to catch up on Thawne’s twisted history, The Flash #26 takes things in a different direction than I was expecting. It opens some interesting character development for both Barry and Iris, assuming Barry is ever able to get over making such dumb decisions.