I’m always hesitant to review crossover events, because most of the time if you haven’t been following all of the books involved, there’s no way to keep up! But that’s not the case with “The Button”. This is a story that can be enjoyed by people just starting on either Batman or The Flash, although some background knowledge does help. Even if you haven’t read Rebirth #1 – the issue that started the entire Rebirth initiative – I wouldn’t consider it a deal breaker (though I’d have to ask why you’ve waited so long). “The Button” is just a well-constructed story, built around several visual homages to Watchmen.

After all this time it looks like we are finally going to get some revelations regarding the Comedian’s badge, which appeared in the Batcave and has been rarely mentioned since. I’ve been looking forward to this mystery unfolding, and even though the issue piled on even more questions, I was left with little answers but a lot of excitement.

Tom King and Jason Fabok are careful to stick very close to the nine-panel grid, with few exceptions. This format is a clear reference to Watchmen, and allowed the story to unfold at a rapid pace. Which is appropriate, considering the issue is dominated by the appearance of the Reverse Flash. As one of the few who remembers Flashpoint, Reverse Flash is eager to get his hands on the button. Batman does put up a fight, but even Bruce’s fists can’t stand up to a villainous speedster for more than a minute (a very long minute). 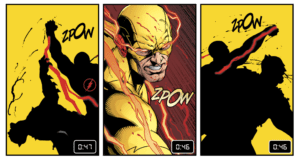 Bringing in the Reverse Flash also gave Brad Anderson the opportunity to bring some additional color into the Batcave. I always love the contrast that Thawne’s yellow suit brings to any situation, and it is especially fitting in an issue with so many other ties to Watchmen.

But the button is not the only Rebirth mystery referenced here. It appears this arc will also shed some light on the Legion of Superheroes. The start of the issue shows us an especially violent hockey game while the still unidentified woman from Rebirth (who claims to be from the future and is connected to the Legion) looks on in hysterics. She lets slip that, sometime in the future, the Legion will be annihilated. I’m curious to see how this future event connects to what’s happening in the present, and what, if anything, this game has to do with it. 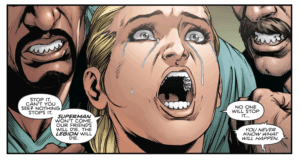 The story continues in the next issue of The Flash. Hopefully, now that there are even more burning questions… Batman and Flash can finally get started digging up those answers.