Well, now I am thoroughly confused. Last week, I was hoping that the next installment of “The Button” would bring some much-needed answers. Instead, it just piled on additional questions!

Once again, the issue opens with someone appearing to suffer a mental breakdown. Last time, it was a member of the Legion of Superheroes who had come from the future. Now, we have Johnny Thunder talking about the Justice Society of the past. It is yet another cameo from Rebirth #1 to remind us of that there is a greater mystery than just the button and its origins.

With Thawne dead, Joshua Williamson takes a moment to let Barry process his emotions. The man who killed his mother is gone, but now he must investigate that same man’s murder. It is a quiet moment, that reminds the reader of how much of a hero Barry really is. Even though the Reverse Flash ruined his life, Barry still acknowledges that Thawne’s murder isn’t justice, and whoever killed him needs to be caught. Even if the killer is Barry himself.

Williamson also acknowledges the similarities between Barry and Batman, and the reason it makes sense for them to be doing this investigation together. Barry has a connection with Bruce that he doesn’t have with other members of the league: Bruce is the detective and he’s the forensic scientist. They make a perfect team in that way. 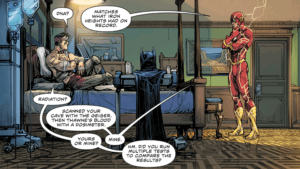 Unfortunately, they are also both too emotionally invested in this case. Barry because of Reverse Flash and Flashpoint, and Bruce because of the appearance of his father’s “ghost”. There is no one around to tell them not to make reckless decisions! And using the beloved cosmic treadmill, or meddling with time in any way, is always a reckless decision. I was honestly surprised Bruce not only didn’t stop Barry from using the treadmill, he insisted and came along for the ride – which looked a little silly, but that’s not the point. While I understand that solving the mystery is important, half of me was berating the two for taking such a risk.

The other half was just excited to see what else could happen! Although I have no idea how the conclusion of this issue is even possible, it does look like the next Batman will be an emotional one for Bruce.

The Hi-Fi colors pair perfectly with Howard Porter’s art, especially in the sequence where our two heroes are traveling through time. The attention to detail throughout the issue was 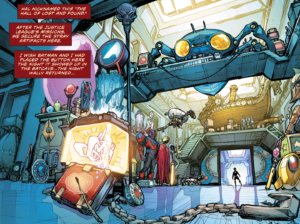 astounding, down to including reflections in the tiled floor of Batman’s bedroom. There was just so much to see. I even zoomed in on my digital copy to try and identify all the costumes in the Watchtower’s vault.

I’ll admit I was disappointed that there were so few answers (again) in this issue, but only because I am so invested in seeing how it all ends! How are the Watchmen—or, more specifically, Dr. Manhattan—connected to the speed force? Why was Thawne killed? What happened to the Justice Society in the past, and what will happen to the Legion in the future? And, most importantly, how are Batman and Flash going to get home!?