When the covers were revealed for The Flash #22, I was convinced the final issue of “The Button” arc would include a visit from The Rival, Jay Garrick’s old enemy. The covers depicted a shadowy figure in Garrick’s outfit, which is what Dr. Edward Clariss typically looks like. That turned out to be a misdirect, and it was Garrick himself who finally made his Rebirth debut.

I went into “The Button” thinking we would come away with answers regarding the two Legion of Superheroes members, as well as the Watchman. There were already so many questions going in to this crossover, with every passing issue I was hoping there would be a few more answers than there were. While the one answer we do get is still important, it would have been more impactful if the announcement of Doomsday Clock hadn’t been announced before anyone had a chance to read this issue of Flash. 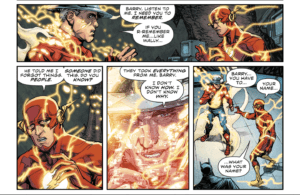 “I don’t know how, I don’t know why,” was certainly a recurring theme. This time, those words belonged to Garrick. But what does he mean? And who should have been his anchor, if not Barry? Has Joan Garrick been wandering around all this time, having forgotten her husband, just like Linda Park forgot Wally West? When Wally began to fade during Rebirth, there was the assumption that fading away meant he was gone forever… so does that mean Jay is dead? I can’t imagine that’s really the case—his return has been hinted at too heavily, I don’t believe that all that build up was just for this one moment of dashed hope.

So, this entire arc was really just leading up to the reveal of another crossover, this time focused on Superman. It also confirmed that yes, Dr. Manhattan was behind Rebirth. We all knew it was coming, but man… those three panels as Manhattan descends upon the button, quoting himself from Alan Moore’s Watchmen, were simple but fantastic. Chilling. The reveal was beautifully done. And it also has echoes of what Thawne says earlier in the issue, about how there is no future or past, until he decides to put it all back together. Thawne believes he has power over time, but Manhattan easily cuts him down. However, if Manhattan is like a puppet on strings, as he says, perhaps there is something greater behind the New 52 and Rebirth after all? Ugh, now my head hurts. 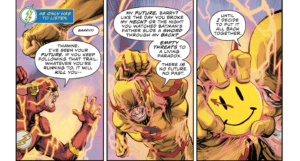 Even though it was just the prelude to another crossover, this entire arc was a fun, heart-wrenching ride filled with solid art and a ton of great moments for both Bruce and Barry. Flashpoint Batman is gone, Thawne is dead, Garrick is… hopefully alive… and our own Batman and Flash are left with a lot of emotional scars from their trip through space-time.

I just don’t want to have to wait until November to learn just what is happening with the Legion of Superheroes!

*Images taken from DC’s The Flash #22