Spoilers ahead from The Flash #25

It was a great choice to have three different art styles utilized in this issue, reflecting the different perspectives we are given on its story. Almost all of it takes place in flashbacks, as Barry Allen and Eobard Thawne both recount the story of how they met. It is a familiar story, reestablishing their relationship as something very close to what it was before Flashpoint, where Thawne is a Flash-obsessed man from the future. He held Barry high on a pedestal, idolizing him to the point that he tried to become him, but when he realized that their friendship wasn’t exactly unique and special, he snapped. 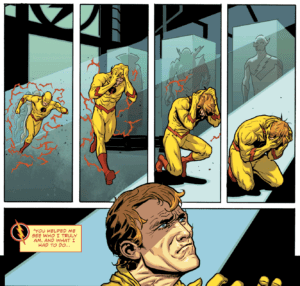 In a way, Thawne is constantly pushing Barry to be a “better” hero. He will just keep coming after the Flash until Barry can finally stop him, somehow. But as Barry points out, the Reverse Flash just keeps coming back. I do like that Rebirth is choosing to acknowledge different versions of Thawne, including the one from the New 52. It would be easier (and much less confusing) to just sweep all that history under the rug, but this is time travel we’re dealing with, so everything’s fair game!

Unfortunately, that also means we don’t get a lot of new material in this issue. It was still a fun read and is great for new readers who are not incredibly familiar with Thawne’s history. I have been enjoying this arc, but it did feel like there was a lack of momentum, which is strange because this is another Rebirth anniversary issue. While other anniversary issues were wrapping up storylines and preparing for new ones, The Flash #25 is still in the middle of its story. It does end with a reveal that will affect the Flash’s future in the coming year, and the build up to the final page was short and effective, but also incredibly predictable. Thawne was always going to reveal Barry’s identity to Iris, I just hope the fallout can subvert expectations a bit more. 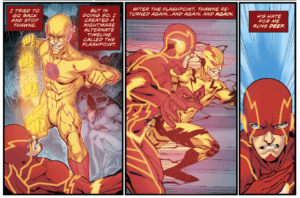 The best moments in this issue belong to Thawne. He is just so smug when Barry appears in the Flash Museum, it was delightful. When he moves at super speed out of his costume, taunting Barry, the lack of lightning was also a nice way to emphasize how much faster he is. In his own twisted way, he might believe he is helping Barry, only for Barry to constantly fail to live up to Thawne’s own expectations.

*Images taken from DC’s The Flash #25