It’s been a while since Stephen Byrne has been a part of Green Arrow, last seen in #9, but his colorful and more cartoonish style is not only stunning, it’s also perfect for the team-up at hand. If you’re a fan of CW’s “Arrowverse”, you might be interested in seeing Barry Allen and Oliver Queen team up like they often do on their shows. Just be warned that their relationship isn’t the same here as it is in the show. There’s a reason Oliver hasn’t interacted with a lot of the greater DC heroes outside of Canary since Rebirth began: they all think he’s a jerk.

This was mentioned very briefly during the very first issue of Green Arrow Rebirth, and now it’s finally paying off. If each issue of the “Hard-Traveling Hero” arc is going to be Oliver teaming up with different members of the Justice League, I’m all for it (next issue looks like it’s Wonder Woman!), especially if Percy manages to incorporate their current storylines with Oliver’s journey. Having the Ninth Circle be responsible for funding the criminal organization Black Hole was a nice touch that explained why Flash was running around so far from Central City. It gives readers a look into what other characters have been doing without taking the focus off of our hero.

Of course, Oliver did jump bail, leaving Emiko and Dinah to take care of Seattle in his absence. We get a brief look at them here, but don’t learn much except they’re looking for “The Auctioneer” and the remaining underground men. Well that, and Kate Spencer is pretty upset with Oliver of course.

Green Arrow and Flash find out that the Ninth Circle was planning to hit DC with Black Hole’s speed-force bomb. Now that they’ve foiled that plan, at least for now, it won’t be long until the Circle realizes that Green Arrow isn’t content to hang around Star City. This was a fun issue filled with speedster wildlife that gave us a good look at how Oliver interacts with superheroes that have actual superpowers. Oliver isn’t as good of a detective as Batman, and doesn’t have the gadgets either, but he can still make himself useful against a super-fast wolf. 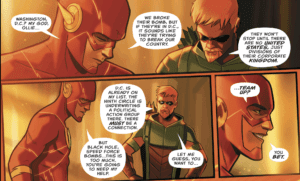 With Oliver’s road trip taking him all the way to DC, I can only imagine this story will grow even more politically charged as he approaches the nation’s capital. Green Arrow’s second year is off to a great and colorful start!