The current arc of Green Arrow has reunited Oliver Queen with his one-time sidekick/partner Roy Harper, and placed them in the middle of a scene ripped straight from the headlines. 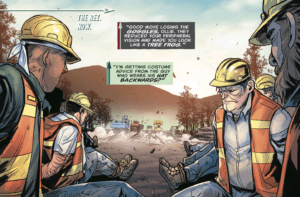 Since Rebirth began, Benjamin Percy has not shied away from using Green Arrow for political commentary. He does so in a way that makes sense for the characters as well. Roy Harper’s backstory involves being raised on a Reservation, and meets up with Oliver again when assisting with a protest against the construction of a pipeline that would run through his former home.

While there is nothing wrong with using comics, or any medium, to comment on political issues—I welcome it, personally—there are a few clunky moments in this issue that distracted me from the main story. The sheriff character, for one, came off as more of a stand-in for every alt-right stereotype than an actual character. Calling our heroes, “delicate, snowflake protesters” isn’t exactly subtle. And I actually groaned when Black Canary rode in on her bike proclaiming they were “here to reclaim the right to make noise.” You see, because she’s a metahuman and her power is a super-sonic scream…. Get it?

We all get it.

Gripes about dialogue choices aside, the main crux of the issue is on Roy Harper and his character development. He resents Oliver for abandoning him when he was addicted to heroin, and the readers get to see that moment through his eyes. We also watch as he works through that pain and confusion. Roy is not so quick to forgive his former mentor, and it is easy to see why.

Part of Green Arrow’s strength is showing us an Oliver Queen who recognizes his shortcomings, and the difficulty he has in overcoming them. Oliver wants to practice what he (loudly) preaches, but that is not always easy. Confronted by one of his greatest mistakes—his relationship with Roy—we see Oliver making a real commitment to change.

No matter how one might feel about Percy’s choice to focus on the politics of the moment, it’s clear this is the Oliver Queen he has wanted to write for some time, and his passion for the character and what Oliver stands for really shows through. Green Arrow remains a stand out part of Rebirth. I trust in Percy’s ability to continue Oliver’s character development at a fun, steady pace, while reintroducing several of his supporting characters in ways that fit his themes.

None of this even touches on the art, which continues to shine. Green Arrow rotates artists, but this “Return of Roy Harper” arc has been driven by Eleonora Carlini and Mirka Andolfo on art, with Arif Prianto on colors. There is so much detail in the lines and colors that it is really in the reader’s best interest to take their time examining every panel. Lately, I would say that Green Arrow has made itself known for its splash pages, and these three carry on that tradition. 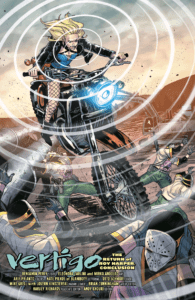 Flashbacks are a common story-telling mechanic, but I appreciate how the Green Arrow team allowed the past and present scenes to unfold side by side. It helps with the pacing of the issue, and allows us to clearly see what is in Roy’s mind from moment to moment. The art and paneling drive home the idea that Roy is driven by his memories of Oliver, Count Vertigo, and his family. There is also great use of the negative space between panels, which can often be overlooked. I could go on about the small details, but I do believe the art can speak for itself.

Issue 20 serves as the conclusion of this arc, which brought us a great character arc for Roy Harper and a touching reunion between Green Arrow and Arsenal. If I have one hope for Roy’s future in the series, it is for him and Dinah to interact more than they did here—as a nod towards their own history. Next issue takes us back to Seattle, where Oliver will continue his fight for the city, but this short trip out of town was a welcome and eventful one.