This issue is the start of a new arc for Green Arrow, and spends most of its time setting up the major pieces that will carry us through the next three issues. If you are a fan of the TV show Arrow who is interested in digging into the comic-book character, I’d say this arc serves as a great starting point. This is a story that will feel familiar to Arrow viewers: Oliver Queen’s city is under siege.

First, I want to draw attention to the fantastic layout of this issue. It is dominated by six double-page spreads that gives Benjamin Percy the ability to tell an A-Story and B-Story at the same time. Much like the juxtaposition of flashbacks from Green Arrow #20, Percy and Juan Ferreyra know how to tell a story in a way that takes advantage of the medium. And while there is still a political element here, it felt much more organic than the pipeline arc, which often came across as heavy-handed.

Oliver’s story is the B-Story, taking up the top third of every page. He goes to visit his father’s grave and reflects on his past relationship with the late Robert Queen. Ferreyra fills Robert’s secret underground bunker with details that shine some light on the man he was, and his relationships. Other than a major revelation at the end of issue, there aren’t too many surprises here. I found it fitting that Oliver spends this issue alone – no Diggle, Emi, Roy, or Dinah – just a son reliving memories of his father.

The A-Story that plays out underneath is where the arc gets its name: “The Rise of Star City”. Typically, Star City has been its own unique place within the DC Universe. Green Arrow originally operated out of Star City before moving to Seattle and back again. Now it seems Percy is using Rebirth to bring the Star City name back with a darker twist. Seattle has been undergoing some drastic changes over the past twenty issues, including the election of a crooked mayor, but nothing quite like this. While Oliver is wandering underground, four villains are setting off disasters across Seattle one after the other. 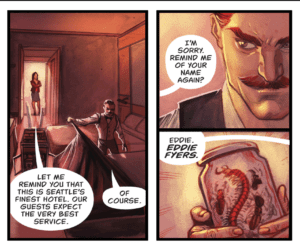 Ferreyra also does the coloring in this issue, and it goes perfectly with his amazing layout. I loved the decision to punctuate every dramatic turn with a shock of red. He also makes the top and bottom stories distinct from one another in their palettes – Oliver’s journey is muted and colored realistically, while the bottom is much more exaggerated and off putting. Ferreyra really shines, and I’ve already reread the issue several times for no other reason than to take in every detail of his work.

As I said, this is clearly just the prologue for the fight ahead. Apart from retreading a few details readers may have forgotten from earlier issues, there very few revelations worth mentioning until the very end. Just a lot of bodies, and of course some political corruption. But I do hope, with as much carnage as there was in this issue, that the fallout is handled well. All too often, in comics, death and destruction is swept under the rug after an arc is over. It would be a shame to see this entire setup dissipate without any lasting consequences.