First off, I’m going to need Black Canary to stop making puns about her powers. It’s gotten old. But other than that, Green Arrow #22 is another solid entry in one of Rebirth’s most consistent, and politically charged, books. 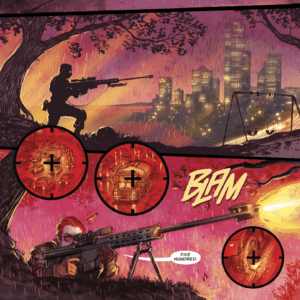 Picking up immediately after the last, Oliver and his team have set to work evacuating people from each of the disasters happening across the city. It doesn’t take long for Oliver to track down Eddie Fyers, one of the “four horsemen” laying siege to Seattle. After an ambush from Brick and Cheshire, Oliver retreats to try and figure out his next move. While all of this is going on, we are treated to a scene with Mayor Domini. Benjamin Percy is once again getting incredibly political with his storyline, but this is Green Arrow: it’s part of what makes the character who he is.

It wouldn’t be a Green Arrow story without Green Arrow and Black Canary breaking up every so often. Although I never like relationship drama just for the sake of it, this was an argument that had been building up for several issues. Dinah is not one for keeping her opinions to herself, and has been adamant about how she thinks Oliver should be handling the corruption of Queen Industries. But now that that same company is responsible for not only the pipeline from the last arc, but also these devastating attacks (of which the death toll is in the several hundreds) Oliver is pushing back.

Luckily, Percy does try to present both sides of the argument. I didn’t find myself siding with either Dinah or Oliver. Both had valid reactions, at least until Dinah stormed off like she tends to do in this book. Do I think they broke up for good? No, of course not. In fact, I would be incredibly surprised if they were not working together again in the next issue. I trust that Percy won’t let their relationship problems get in the way of them helping Seattle. 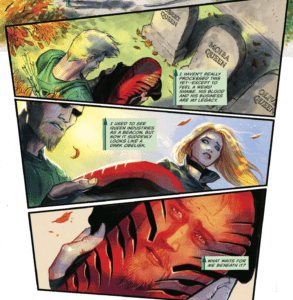 I’ve said it before, but Percy has a real understanding of Oliver Queen’s character. For all the great action in this issue, there are also great moments of reflection for our hero.

Because this story is relatively straight forward, the paneling doesn’t pull as many interesting tricks like it did in Green Arrow #21. However, that didn’t detract from Juan Ferreyra’s phenomenal art and colors. The lighting as Fyers climbs to his sniper’s nest is breathtaking.

This was not an uplifting issue, that’s for sure. The team is fractured, Seattle is in ruins, and just when it looked like things were going to end on a hopeful note… there’s still time for one last twist. I’m glad there’s only two weeks until we see what happens next!