Spoilers ahead for the “Rise of Star City” arc and Green Arrow #24.

Another Green Arrow, another issue filled with so many great double-page spreads. There are only three single-pages in the entire thing. It’s great. I love the way Benjamin Percy and Juan Ferreyra have laid out this arc, and am constantly reiterating how well Percy uses the comic medium to its fullest. 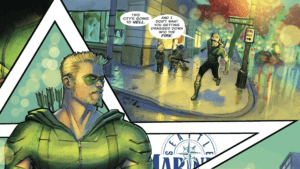 My first instinct with this arc was that this would be leading us towards the Rebirth version of the Mayor Queen storyline. It’s looking like that instinct was wrong, which I’m happy about. I think Percy has been doing a great job telling the stories he wants to tell—even if I’m not always a fan of the puns—and he’s taken Oliver on a great journey. I am already excited to see where things go after this.

But I’m getting ahead of myself! The issue subverted my expectations about how all of this was going to end. While Team Arrow and Black Canary take care of the remaining horseman above ground, Oliver tracks the problem to its source. He confronts Broderick as he spouts some nonsense about a prophecy and ley lines. I’m glad that not too much focus was put on the supposedly mystical aspects of Seattle. That was never the point. It’s about the real, vulnerable people in the city and what he and his partners can do to help them.

When Broderick implies that Emiko might decide to take Oliver’s place in the whole “Queen prophecy” thing, I love how quickly Oliver shut him down. Percy has been keeping these characters on a straight path, and having a repeat storyline of Emi tempted to betray her brother/not actually betraying her brother would get boring. With Ollie set to leave Seattle (or is it really going to be called Star City?) in the coming arc, I hope that doesn’t mean the new Red Arrow is left behind.

Not enough can be said about Ferreyra and his awesome art. This is some of his best work on Green Arrow. The two-page spreads give him room for some sweeping action shots. Watching Oliver sneak through the sewers into Queen Industries while Black Canary exposits on Broderick’s plan was a standout to me, because Ferreyra manages to pack so much detail into such a small strip (and because Ollie manages to miss the poor person locked in someone’s basement).

This has been a great arc, and the finale manages to wrap up the important points while also leaving the status quo in pieces. Diggle is still missing, Oliver is in handcuffs, and Henry is left somewhere in Queen Consolidated. The good guys didn’t exactly come out of this on the winning side, and that’s exciting on its own. It’s time to pick up the pieces and keep moving forward.