Well, it finally happened. After seven seasons of watching Dany’s three adorable dragons grow up before our eyes, we were forced to watch as the Night King chucked an ice spear towards Viserion in the midst of battle, sending him falling out of the sky and into the icy water. It was hard enough as a viewer to watch, but then seeing Dany’s defeated face amongst the piercing shrieks of Drogon and Rhaegal as they watched their brother fall was utterly heartbreaking.

Not to mention the fact that in the episode’s final moments the Night King pulled Viserion out of the water and turned him into a wight dragon, meaning that not only do the White Walkers now have a way to get over the wall, but Dany and her remaining dragons will be forced to see Viserion again and fight against him.

Literally, all of us just thinking about this:

While Viserion wasn’t always the most important of the dragons, he was still a dragon, which on Game of Thrones was a huge deal. Let’s take a look back at our fallen Viserion and the perfect creature that he was.

We first met Viserion back in the pilot episode of Game of Thrones when he was just a wee little petrified egg hanging out between his brothers. Dany was given the eggs as a wedding gift when she married Khal Drogo. 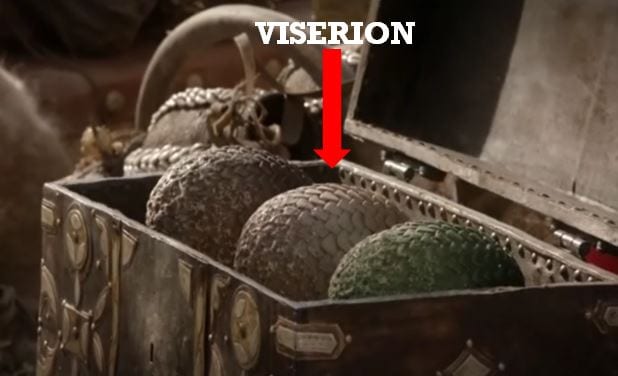 Since dragons had been extinct for quite some time the eggs were mainly used as decoration by people, but soon after being gifted to Dany and being kept surrounded by constant heat, her fascination with the eggs grew and her true Targaryen bond with the dragon became stronger.

After the death of Khal Drogo, Dany enters into his flaming funeral pyre with the eggs, leaving her followers to believe that she would die alongside her husband. However, the next morning she emerges from the debris with her newly hatched dragon children. 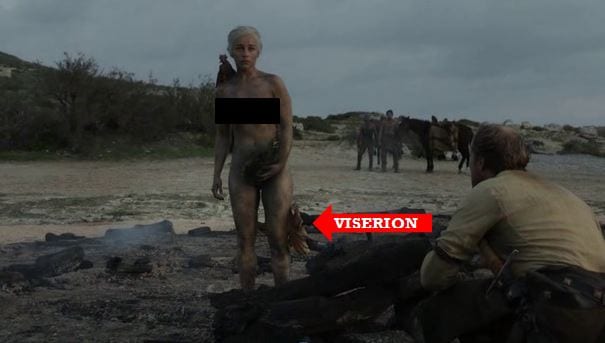 Viserion was named after Dany’s brother Viserys Targaryen who we met in the first season. Viserion’s golden color is almost a perfect mirror of Viserys who wanted the crown and the Iron Throne so badly that he went to whatever lengths necessary, which resulted in his death of having molten gold poured on his head. 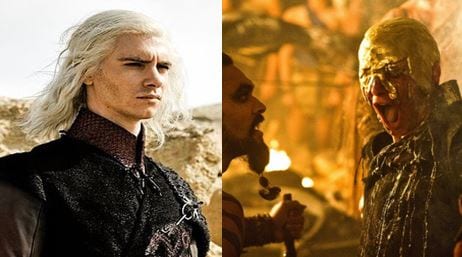 Later in the second season finale, we see Drogon, Rhaegal, and Viserion after they’ve been captured by the warlocks of Qarth and chained up in the House of the Undying. How stinking cute are they? Viserion is the golden one in the front. 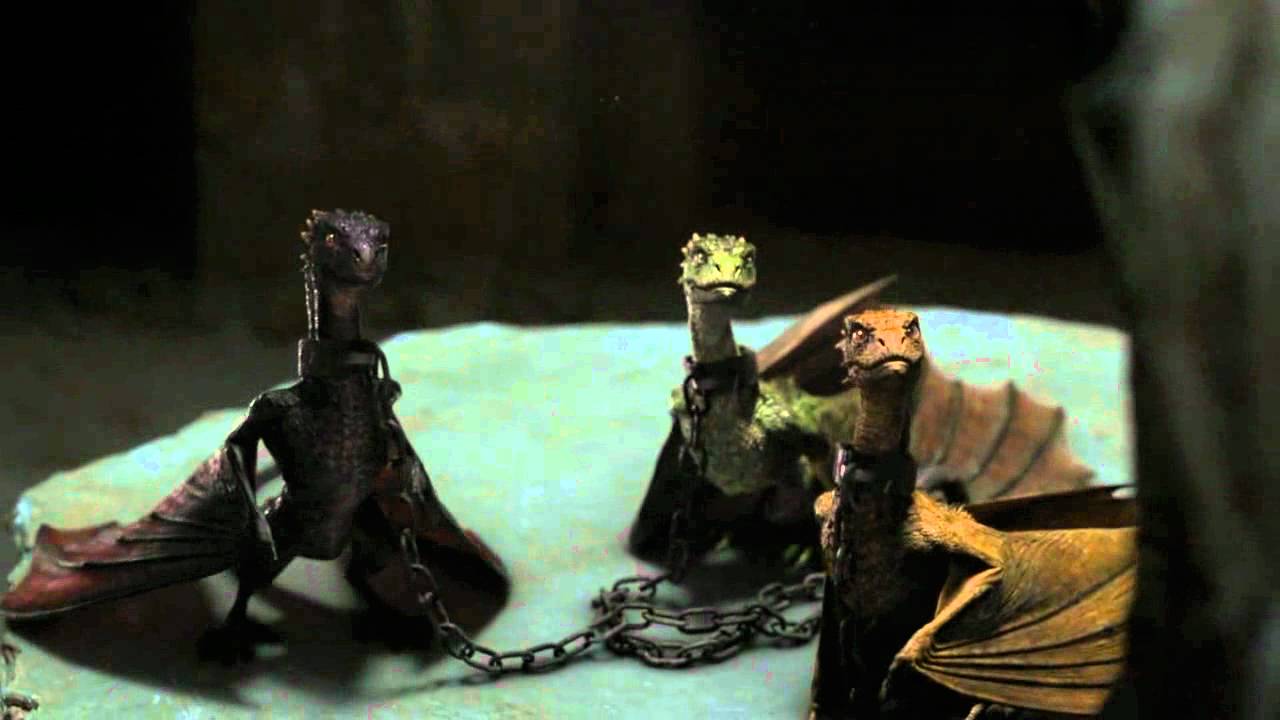 Even though Drogon got the most screen time that season, Viserion and Rhaegal teamed up with him to totally light up warlock Pyatt Pree, allowing them all to escape. He was such a little badass!

Viserion was always ready to serve as an intimidator for his mother when needed, as was apparent during her meeting with Yunkish ambassador Razdal mo Eraz. He also swoops down and manages to catch the piece of meat that she throws to all of them so, Go Viserion!

As the seasons went on the bond between Dany and her dragons grew, but almost more so the bond between the dragons grew, especially between Rhaegal and Viserion. After Drogon kills a little girl while off on his own, Dany chooses to lock up Rhaegal and Viserion as a means to control the beasts who were becoming too big of a risk while she tried to gain followers. As you can see below, Viserion was not feeling it. 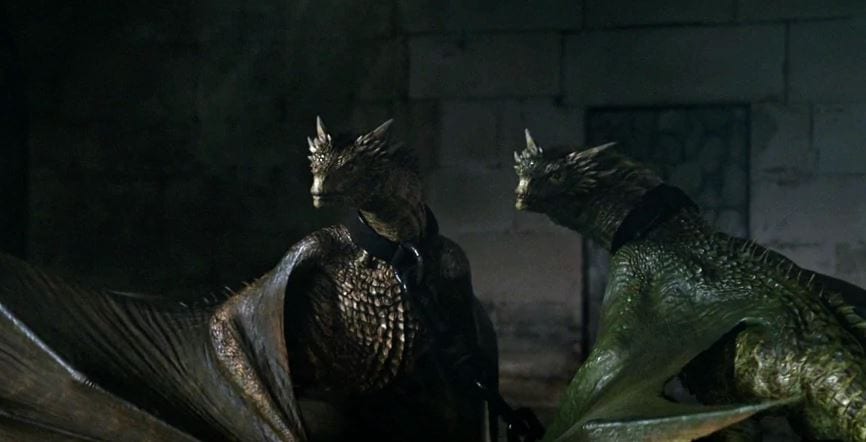 Later in season 5, Dany goes to visit the two brothers to find that they had grown larger and more aggressive in their captivity than they were before. Realizing that her own children were turning against her, Dany again forces herself to keep her distance from them. Later on, Dany arrests some of the leaders of Meereen’s great families and brings them to meet Rhaegal and Viserion. Rhaegal sets fire to one of the nobles and shares the meal with Viserion because they were the best brothers ever and looked out for each other.

Even though Viserion and Rhaegal are finally freed by Tyrion in season 6, they don’t leave their captivity until Dany and Drogon return home to Meereen. Then we were treated to a beautiful dragon reunion that they had made us literally wait forever for. It was extremely touching and totally badass to finally see Vieserion and Rhaegal free to fly with their brother and mother. They may have been a bit smaller than Drogon, but their ferocity and loyalty were stronger than ever.

They promptly kick some fire-breathing dragon ass and help Dany gain her new fleet and then in a breathtaking shot they all three fly alongside her on her way to conquering Westeros.

We’ve seen a lot of the dragons flying around Dragonstone this current season, but it’s Viserion and Rhaegal’s moment on-screen when Dany and Jon are discussing her dragons and the loss of their brothers that is a standout.

Viserion had his last happy moments in Dragonstone alongside his brothers and it actually makes my heart burst. When you think about how hard his death will be on Dany imagine it for the dragons, especially Rhaegal, who are the only three dragons that exist and have spent their entire journey together.

Since he’s Viserion and had unwavering love and loyalty for Dany he wasted no time scooping into the battle beyond the wall and lighting some White Walkers up.

He was totally kicking ass and taking names until the Night King decides to ruin it all and throw his spear at him. We all had to watch in defeat and shock as Viserion completely bled out and fell to the ice and into the water. The hardest part was, again, watching everyone’s reactions and hearing the cries of Drogon and Rhaegal as their brother died.

Viserion’s death will have a huge impact on the rest of the series. Not only did it show Dany that yes, her dragons can be killed, but it gave her a real reason to fight against the White Walkers other than Jon just asking her to do so. The Night King took away one of her children and if that doesn’t fire up Daenerys Targaryen then I don’t know what will. The worst part will be watching her have to fight against him, most likely on the back of Drogon.

While it made the most sense for Viserion to be the dragon to die ( I mean how awesome will it be to see Jon riding the dragon named after his father) it still didn’t make it any less horrific to watch. Our cute little golden Viserion is gone, but in his death, he wiped out a hell of a lot of White Walkers and that definitely stands for something.

RIP Viesrion and please don’t cause too much trouble as a wight.

‘Game of Thrones’ Recap “Beyond the Wall”