Only read on if you are fully caught up on Game of Thrones!

It felt like we had been waiting for ages for our favorite Stark kids (and Bran) to start reuniting. The kids were all separated during season 1 and did not start meeting up again until Jon and Sansa in season 6. So, heading into season 7 we were met right off the bat with a strange reunion between Sansa and Bran, which creeped everyone out. Then shortly after we were able to see once bickering sisters Sansa and Arya reunite as well. While it seemed to be a well-received reunion on both sides, things started to get a little fuzzy the more time that they spent with each other.

Arya and Sansa never had the best relationship when we met them in Season 1. Arya’s tomboyish nature was highly juxtaposed with Sansa’s dream to become Joffrey’s queen one day. The two were night and day and as they embarked on their journeys through the seasons, they both went down very different paths, but their underlying motives were the same – avenge and protect their family.

So, now that the Stark sisters are together at last in Winterfell things are a little rocky. The two have appeared to be very wary and distrustful of each other, sending fans into fits of annoyance who just want to see the two of them finally work together to take out the ultimate weasel, Littlefinger. 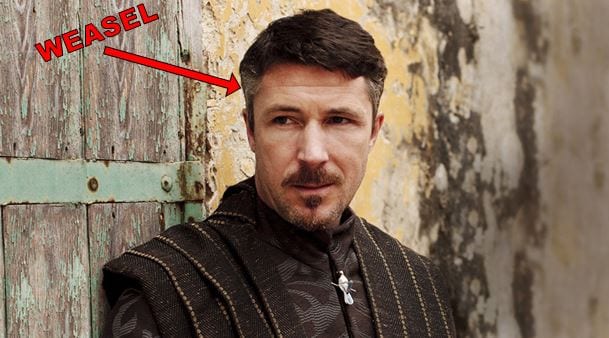 But, what if that’s been their plan all along and we are watching their drama unfold just as Littlefinger is, falling for their traps every step of the way? One theory suggests just this. That Sansa and Arya have been faking their fights and suspicions of eachother this whole time, leading Littlefinger to believe that he really has put a wedge in their relationship, when actually they’re the ones playing him.

Let’s check the evidence, shall we?

They Both Literally Hate Littlefinger

This entire season (and some of last) Sansa has been totally hating on Littlefinger. Last season she tells Jon that “only a fool would trust Littlefinger.” This season she’s already told Brienne that she “knows what he wants” alluding to his ulterior motives and Bran that he shouldn’t ever accept a gift from him because he will always expect something in return. Why would she be constantly shelling out this advice if she wasn’t going to take it? In addition to this, Arya cannot stand Littlefinger and is not pleased when she finds out he has been residing in Winterfell. So, these two have consistently been on the same page when it comes to the skeeze, so…

Why is Sansa all the sudden confiding in him?

Like I already mentioned, the season kicked off with Sansa’s visible distaste for any advice or guidance that Littlefinger threw her way.

Littlefinger: Why aren’t you happy? What do you want that you cannot have?
Sansa: At the moment, peace and quiet.
*Brienne Approaches*
Sansa: No need to seize the last word Lord Baelish. I’ll assume it was something clever.

That was just one of the many brush-offs she has given him thus far, so why all of the sudden shortly after Arya shows up does she start asking for his advice and confiding in him about her worries? Is she trying to make him feel trusted? That he’s her confidant? While many think that it was just Sansa naively allowing Littlefinger’s manipulation to work, if you really think about it, Sansa is a hell of a lot smarter than that. It’s food for thought to consider the fact that she just wants him to think that all of his little whispers worked and he has driven the Starks apart.

Did Arya learn nothing from her training?

We followed Arya for quite some time learning to become a Faceless Man. She is literally an assassin trained in the arts of disguise, deceit, secrecy, and wits. Also, she spent part of that training literally blind, learning how to use her other senses to move around without being noticed. So, hello! Why on Earth would she be following Littlefinger around the grounds of Winterfell so obviously?

Not to mention after he hides the scroll in his room she marches on over immediately after and starts loudly rummaging with the lock. The whole situation completely betrays everything that we’ve observed and learned about Arya over the years. It makes no sense. Therefore, Arya’s complete lack of discreetness could insinuate that she’s intentionally making these mistakes so Littlefinger would think she’s fallen into his trap, when in actuality – he’s falling into hers.

In episodes five and six this season, Brienne’s oath that she swore to protect both of the Stark girls comes up. In episode five it’s when she and Arya are sparring while Sansa and Littlefinger watch from above.

It appears that Sansa (and observed by Littlefinger) is realizing that Brienne is not only loyal to just her and that perhaps if things come to blow she would maybe even side with Arya since the two have way more in common. In “Beyond the Wall” resident slimeball Littlefinger butts in again, telling Sansa that if things were going to escalate between her and Arya then Brienne would definitely step in. He thinks that by doing this he’s getting further into her head about whose side Brienne would choose.

It does seem to work as Sansa decides to send Brienne away to King’s Landing as a proxy. But, what if it’s not what it looks like? What if she’s sending Brienne away because her allegiance to both the Stark girls would cause her to interrupt their plan in an unfortunate way. If their plan is to escalate their arguing and distrust of each other wouldn’t Brienne try to intervene? I think so. It seems that Sansa could be trying to protect both Brienne and her and Arya’s plan. Also, Brienne needs to go see Jamie anyway.

How about the day Ned Stark died?

Littlefinger is a sleuth lurking around all of the time. So, in the scene where Arya confronts Sansa about her behavior the day their dad was beheaded it is all sorts of wrong. She accuses Sansa of standing idly by with a smile while Joffrey gave the sentence, but that’s not true at all. Sansa immediately reacted with horror, screaming for Joffrey to change his mind. Why would Arya skew the facts so immensely? Could they have been having this spat because Littlefinger was listening from the shadows, allowing him to believe that his planted scroll plot was working?

“The lone wolf dies, but the pack survives”

In one of the trailers for the seventh season, we hear Sansa say “When the snows fall and the white winds blow, the lone wolf dies, but the pack survives.” Now, heading into the season finale we haven’t heard Sansa utter these words yet, which means that she will most likely be saying them on Sunday, but to who? Hopefully, Littlefinger, who has spent a good portion of his arc trying to separate Sansa from her pack (Jon, Arya, and Bran). The Stark’s are far stronger than manipulation and Winter, so perhaps this sentiment is her telling Littlefinger that despite his efforts to make her the lone wolf, he failed.

What are your thoughts on this theory? Are Arya and Sansa really on the outs or are they playing Littlefinger?

~ More on Game of Thrones ~

‘Game of Thrones’: The Night King Knows More Than You, Jon Snow and May Be Smarter Than We All Realize

Time is a Fickle Thing on ‘Game of Thrones’ This Season