Game of Thrones has been known to have pretty epic (read: depressing as hell) penultimate episodes each season. We’ve had the beheading of Ned Stark, the Battle of the Bastards, and the Red Wedding just to name a few. So, fans were going into “Beyond the Wall” with their guards up and rightfully so because we lost a huge character in what will be a game-changing death moving forward. Fans had to watch as Dany’s dragon Viserion was taken out by the Night King and turned into a wight dragon, so trouble is definitely on the horizon. 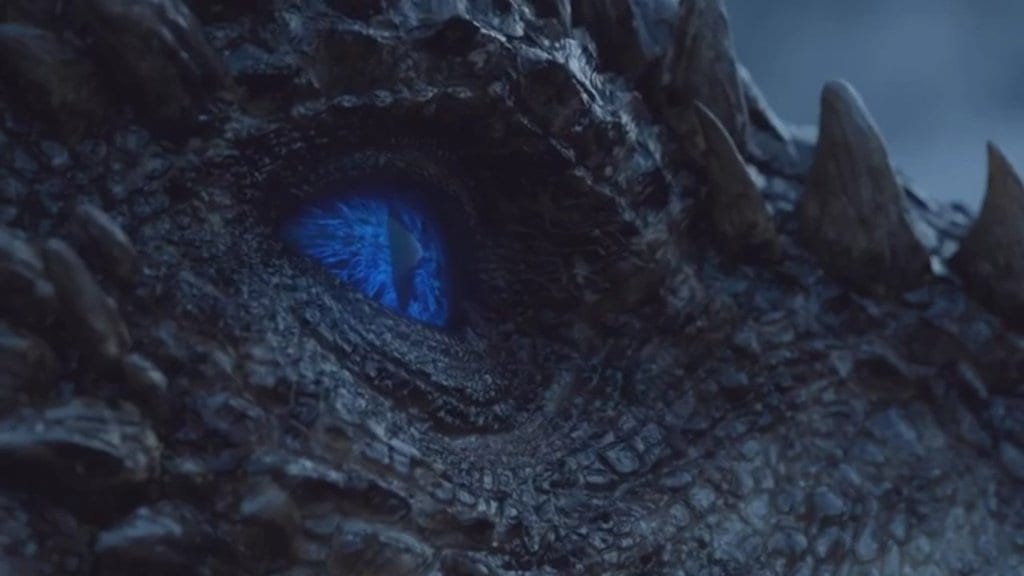 However, despite all of the heartbreak and insanity, “Beyond the Wall” had some nice callbacks to Season 1’s penultimate episode titled “Baelor”. Let’s take a look at some of them!

It’s not really a callback per se, but it sure is some nice symmetry. Season 1, Episode 9 “Baelor” was the episode in which Jeor Mormont first gave Jon his Valyrian sword, Longclaw. The sword had been in the Mormont family for five centuries, but since Jorah brought dishonor to their house he chose to give it to Jon instead.

There is a nice moment of symmetry in “Beyond the Wall” when Jon honorably tries to give the sword back to Jorah, but Jorah declines telling Jon that he was “meant to have it”. Jorah may have been right because later in the episode there’s a quick moment when it appears that Longclaw’s eyes open as Jon emerges from the water.

There’s also a quick moment when Jorah says “May it serve you well. And your children after you.” and for the first time, it’s almost as if Jon is realizing that he could one day have a family. Which leads me to….

Dany’s infertility was last a huge point of contention during 1×09 “Baelor”. When Dany demands a witch perform blood magic to bring Khal back from the dead caused the child she was bearing to become stillborn and the witch also told her that she would never be able to have children again.  “When the sun rises in the west and sets in the east. When the seas go dry and mountains blow in the wind like leaves. When your womb quickens again, and you bear a living child. Then he will return, and not before.”

Whether or not the witch was telling the truth remains to be seen, but in “Beyond the Wall” we have a brief scene where Tyrion inquires about Dany’s succession should she not return from all of the dangerous battles she keeps charging into. Dany was not having any of it and told Tyrion it would be something to discuss once she had the crown.

Later in the episode, she ends up losing one of her dragons, which to her are her children, and also tells Jon that she cannot have kids of her own.

Going off of that point, the semi-romantic scene with Dany and an injured Jon is very reminiscent of her looking over Drogo in “Baelor”. Both Jon and Drogo have scars on their left eyes and the scene made a point to focus on Jon’s chest scar, which as you will recall is how Drogo died. 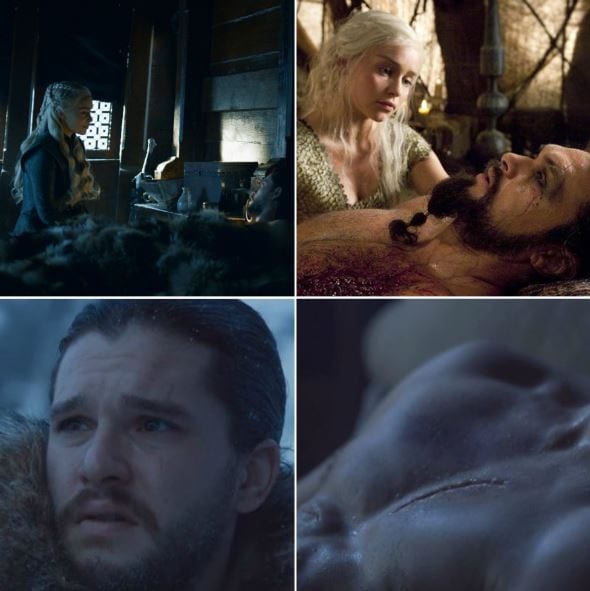 This week we saw a pretty tense scene between Arya and Sansa in which she plays a game with Sansa that she learned in Braavos while training to become a faceless man. The rules for Arya’s game called the Game of Faces goes like this “It’s simple. I ask you a question about yourself then you try to make lies out of the truth. If you fool me, you win. If I catch a lie, you lose.” This may sound similar because Tyrion played a similar game except his, of course, was a drinking game.  “I make a statement about your past,” Tyrion says, explaining the rules. “If I’m right, you drink. If I’m wrong, I drink. And no lying.”

Both scenes really dug into the nature of siblings. Tyrion tells the story of his first marriage and how Jamie hired a prostitute and tricked him into falling in love with her. in “Beyond the Wall” things are much darker as Arya makes a point to tell Sansa that she could kill her and take her face if she wanted to, but ultimately gives her the dagger and leaves. Tyrion and Jamie have since come to terms with each other but Arya and Sansa are still very much at a stand still.

Diving further into the Stark sister parallels is the discussion the two girls have about the day that their father was killed in “Baelor”. After confronting Sansa about the letter she was forced to write to Robb calling Ned a traitor, Arya began recalling Sansa’s behavior that fateful day.  “I remember you standing on that platform with Joffrey and Cersei when they dragged father to the block,” she says. “I remember the pretty dress you were wearing. I remember the fancy way you did your hair.”

However, watching the scene back it’s clear that things have gotten a little hazy for Arya over the years. Yes, Sansa did have on a nice dress and nice clothing, but she was absolutely expecting for Joffrey to pardon her father before anything bad ever happened. When the little punk orders for Ned’s head you can immediately see Sansa freaking out, begging Joffrey to stop.  Arya appears to have blocked that part out, and when Sansa asked if she came running to save their father Arya responds with “I wanted to”. “You didn’t,” Sansa tells her. “Just like me.”

It’s so clear that these two have so much to work out, but their feelings and reactions during their father’s death are one and the same.

‘Game of Thrones’ Recap “Beyond the Wall”

Home » Fandom » ‘Game of Thrones’: Did You Catch These Season 1 Callbacks During “Beyond the Wall”?