Preacher wrapped its second season last night and things went just how you’d expect them to go, slightly frustrating. I’m not talking about from a story perspective but more of a production point of view. Season two of Preacher has been filled with inconsistencies as I never felt that the show runners could string together a solid run of episodes. There were moments that were extremely good and entertaining and episodes that were so flat they dragged, but there was no order to it. Tuning in on a Monday one was never exactly sure what type of Preacher episode they were going to get and I think that weighed in on my experience with the finale. I felt like my patience had been pushed. The most frustrating part about last night’s finale was that it was good, really good in fact, but instead of making me excited for the hope of season three (things look likely) I was more annoyed at the opportunities that were missed.

A lot of what happened in the finale seems like it could have been presented in a shorter time frame and still have been more impactful. Let’s take the Eugene makes buddies with Hitler in Hell story line. I have not been shy about how I felt that this whole story arc was the weakest of the season, and attempts of humanizing Hitler seemed forced and silly. Last night as the two orchestrated an escape out of Hell, there were laughs, but ultimately I just wanted to move on from this. Eugene’s time spent in Hell seemed entirely drawn out and resulted in very little change. I think Eugene was able to get over some of the events of his past, like the treatment of his father and possible abuse by town mascot (geez), but the show never really makes good on that promise. Instead, we get a Eugene who “convinces” Hitler to leave Hell because he’s not the same person only to be played by Hitler in the end. That’s right, surprise surprise, Hitler was playing the long con here and used Eugene and his overall goodness to escape from Hell. Now Hitler is somewhere on earth prepping to do Hitler like things and Eugene… well, he’s waiting for a bus? I’m not entirely sure how this serves the character or shows growth but it took an entire season to get here. 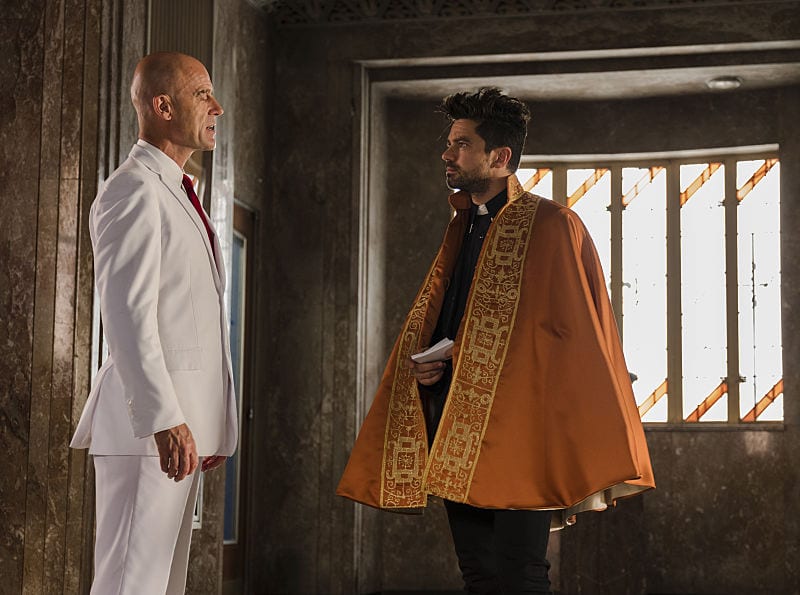 Then there’s the story line between Cassidy and his son Denis. One that I never really sunk my teeth into, and yes, that pun is very much intended. For the most part, I thought the season did a pretty good job in displaying the inner turmoil within Cassidy to turn his son into a vampire or not. It was clear, almost immediately, that this was a bad idea as Denis was nothing like those glitter vampires we’ve heard about. No, he was blood thirsty and savage, but at no point did I feel that his hunger influenced Cassidy. In fact, I thought it was doing the opposite as Cassidy was in constant fear of what Denise was doing. He couldn’t even trust him with his dog. Making Cassidy worried about his inner vampire desires felt rushed and sloppy and a device shoe horned in to wipe Denis off the board. Let’s be honest, it’s not like there was any real emotional attachment to Denis for the audience and I’m sure there are some of you out there who would have liked to seen him dead episodes ago. I like the idea of Cassidy having to struggle with being a vampire but a lot of what happened last night seemed to be a bit out of left field. Not once during this season did we really see him struggle with that inner debate to feed or not to feed. He mostly just raided blood banks and kept his findings in the fridge.

That’s not to say that this episode didn’t do some good things. I would argue that Cassidy, who has been terrifically played by Joseph Gilgun, has been the moral anchor for this entire season as he’s brought levity and soul to these story lines… but more on that in a bit. Jesse has taken up the Messiah mantle, because duh, and doesn’t seem interested in conforming to the ways of old. After Herr Starr plays hype man, Jesse enters a classroom to give his first real speech and perform a miracle in front of children. Not really the audience we were expecting but the humor helps break the absurdness of what’s happening. Granted, Starr sets up a military like raid where soldiers storm the class and Jesse comes out looking like a hero thus getting his name out on social media, but it wasn’t without a cost. It appears that Jesse’s space demon voice is on the fritz and not working to the best of its ability and I can’t help but wonder if that’s because Herr Starr has the 1% of his soul in his pocket. Literally. I’ll be interested to see how that affects his run as Messiah. It’ll be harder for him to perform miracles without it.

From here we get Tulip and Cassidy heading out the door for the originally planned island getaway, but things get canceled when Tulip ends up shot. That’s right, as Tulip goes to say goodbye to the gangs neighbor and her only friend this season, she discovers Lara’s allegiance to the Grail which allows Lara Featherstone gets the drop on her. I couldn’t help but feel this was a crappy ending to a character who once used a home made bazooka to blow up an enemy. I could just be nit picking though but I expected more for Tulip, but in a season that has seen her turn turtle it makes sense that she wouldn’t be in top form here. Needless to say, Tulip gets shot and it’s bad. Bad enough for Cassidy to call Jesse back from his Messiah tour to help. 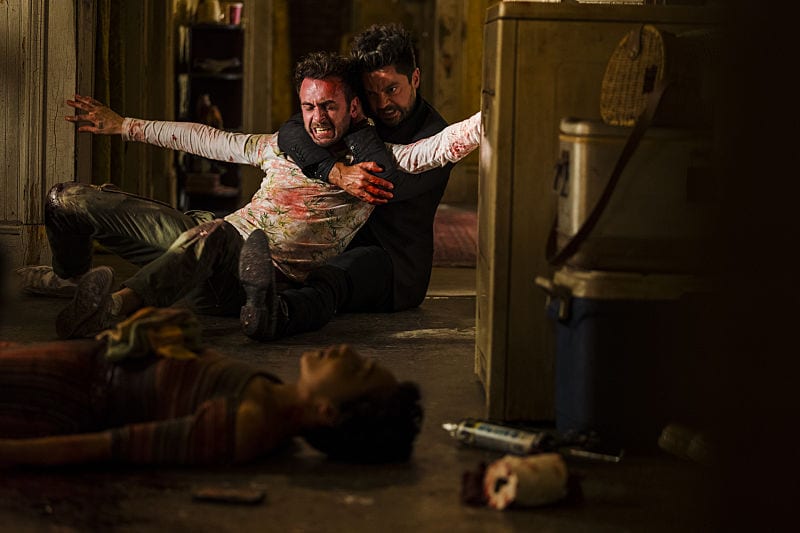 But there’s nothing that can be done. Tulip bleeds out on the kitchen floor as Jesse’s space demon voice fails again as he stops Cassidy’s attempt to turn her into a vampire. That was hands down my favorite scene of the night as I felt Joseph Gilgun acted the hell out of it here and really brought the emotional drama and pain. Cassidy is such a sympathetic character, in a lot of ways he’s like a puppy dog, and seeing him ripped apart here really struck the emotional chord the finale needed. It also helped to punctuate his talk with Jesse as they drove Tulip’s dead body to Jesse’s grandmother’s to be seemingly resurrected. “There’s something I want to say. Something I’ve been meaning to tell you for a long time…I hate you.” We’ve known for quite some time that there was some serious discord between Cassidy and Jesse, and it was easy to believe that it spawned out of jealousy, but within this moment we see that Cassidy’s hate comes from a deeper place. It’s because when he looks at Jesse, he doesn’t see a good person, he sees a selfish monster who allowed the woman he loved to die on a dirty kitchen floor in New Orleans and ignored his pleas for help concerning his son. Jesse isn’t a Messiah… he’s a fraud.

The saddest part is, Jesse knows it too. His response, “if you hate me now, just you wait”, is ominous because it plays on what will have to be sacrificed to bring Tulip back from the dead but also acknowledges that Jesse knows who he is. He doesn’t dispute Cassidy’s hate. I’d argue that he accepts it because Jesse knows what he does and who he is. Where does that leave us going into a possible season three? I don’t have a clue, especially with the emergence of God at the very end in a bender filled hotel room. But here’s hoping it leads to some tighter and more consistent story telling as the potential for Preacher is high. All they have to do is put it all together.

There you have it Geeklings, I’m going to turn it to you. What did you think of the season finale of Preacher? Were you happy with the way things ended up? Were you a fan of season two or did you expect more? Do you think it’s possible for Tulip to be brought back to life and if so can the damage between her, Cassidy, and Jesse be repaired? Sound off in the comments below and as always if you’d like to talk more Preacher you can find me on Twitter @iamgeek32. It’s been a pleasure coming here week in and week out breaking down this show, and I hope you guys enjoyed the reviews as much as I’ve enjoyed writing them. It’s always bittersweet when a show wraps up. For those of you who want more of my reviews, you can find me covering Rick and Morty right now and can look forward to my return to Mr. Robot and The Walking Dead in October. Until then, many huzzahs everyone!