Ugh, this season of Preacher has reached that point where I can’t tell if I want to continue watching to see how things wrap up or if I’ve become completely frustrated. Thankfully there are only two episodes left so it makes the decision a little easier… I think. While I didn’t find “Backdoors” to be as offensive as last week’s, “Dirty Little Secret”, I did find it repeating the trend that has plagued season two. Inconsistency. There were aspects of this episode that I enjoyed but there were large chunks of it where I felt myself tuning out and losing interest. A large majority of that had to do with the scenes set in Hell, despite Hitler’s unbleeped f-bomb, as the premise of Hitler becoming Hitler was kind of ridiculous (who likes plum pie to begin with) and it killed the momentum of what was occurring with our core three characters. 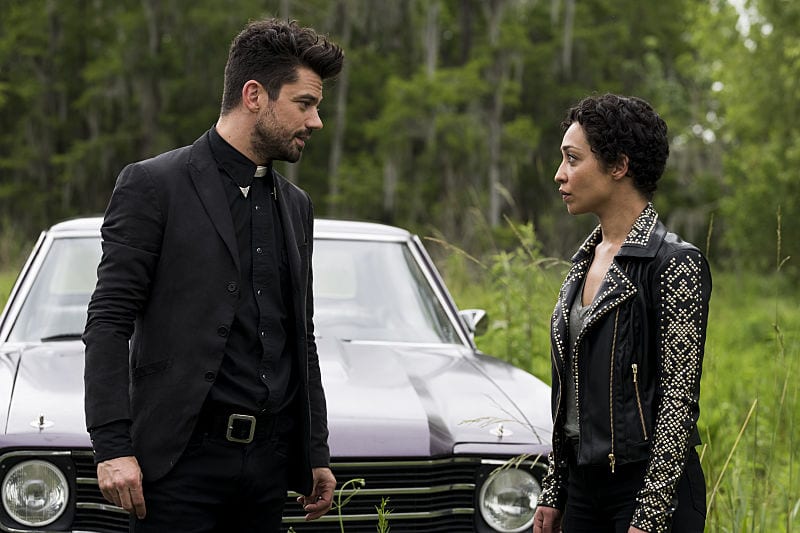 The thing of it is, not all of the show is bad. I really enjoyed watching the group fall apart and even felt that it was long overdue. The pursuit of God has put a strain on everyone and tensions have been at their all time highest. Preacher is at its best when it is focusing on the dynamic between Jesse, Tulip, and Cassidy as their bond has officially been shattered. The discovery of the Saint of Killers weapons underneath the bathroom tiles seems to be the final straw as ties are being severed. Tulip feels that she’s given up her sanity and Cassidy feels that they’ve been dismissed and ignored, and both feel Jesse has given up nothing. I wouldn’t count 1% of your soul as nothing but it’s pretty close.

Even the promise of a vacation misses the mark as Jesse acknowledges that he won’t hit the beach until God is found. Insert extreme eye rolls from the rest of the group. Tulip and Cassidy are done with this adventure. Tulip wants to purge the memory of the Saint of Killers from her mind and tries to do so by destroying his weapons. Spoiler alert, they can’t be destroyed by mere mortals. Cassidy has his hands full with his son who seems to be the type of vampire who would hunt you in the shadows. Now with the Saint of Killers no longer being in his swamp like prison, stress levels have risen again. Risen to the point where the group knows that the Saint doesn’t want them, he wants Jesse and that’s enough to push him away. I wouldn’t be surprised if the group all went its separate ways come season end.

What does pushing him away entail though? Right now it means falling right into the hands of the Grail, more clearly Herr Starr, who is hatching a scheme for Jesse to become God. Starr continues to be a bright spot within this season despite how often his scenes make me a bit uncomfortable. I think that’s part of the point but he’s captivating and steals any scene he’s in. Getting Jesse to become God seems like the ultimate manipulation and a way for the Grail to further their agenda. Starr clearly wants to use Jesse’s super powered demon voice to affect large volumes of people, but for what purpose? What is he working on? Does he think if he gets Jesse the big seat that he’ll be God by proxy? It’s going to be tough when he has shown no immunity to Jesse’s super powered voice.

Jesse doesn’t want the job though and feels more jaded than ever at this point in the game. He’s lost his friends and seemingly lost his faith and has nowhere to go. I called it all the way back during the two-night premiere when I said God was the man in the dog costume, but why, and apparently that was a test. A test that Jesse failed. Can we really blame him though? Being presented a man dressed in a dog costume who wants a number of weird sex acts performed on him… doesn’t seem very God like. If he agrees to participate is that his opening with God… with God?! Again, this is one of those moments that seems like it’s written into the show for the sake of offending. Couldn’t God just as easily have been a sax player in one of the night clubs? It’s just as inconspicuous. I guess that doesn’t make it as impactful within this universe because things have to be weird and unusual? I don’t know. I’ve given up trying to understand the rhyme and reasons of Preacher. 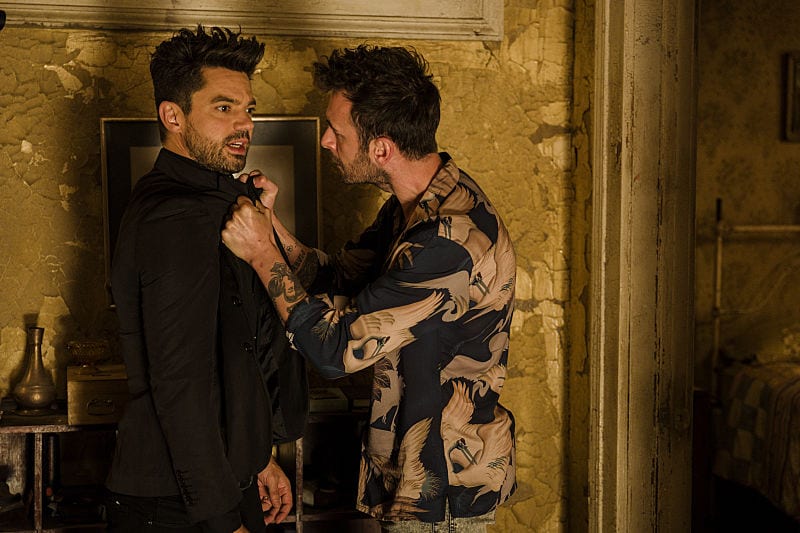 Elsewhere, Hell is about to find out that Eugene doesn’t belong there and Hitler knows a way out, and I don’t care. I really don’t. Eugene used to be such a fascinating part of the show for me, and that rang true early on this season too, but all these Hell story lines break up the momentum of the episode and seem to drag on. Let’s get somewhere with it already. At least this episode Eugene and Hitler made a move to try and escape, but they’ve lost me on this one. I’m sorry, no matter how hard you try I’m not going to root for Hitler and the idea that the audience would seems kind of ridiculous to me. I’m curious if there is anyone out there right now watching Preacher and going, “You know that Hitler… not so bad.” Another case of not seeing what the pay off is here.

Here in lies my problem with Preacher. I should be focused on Jesse’s temptation to become God and just why the hell he didn’t drown to death in the swamp box of doom as a child. I should be caring about the fact that the Saint of Killers is still out there somewhere and his weapons can’t be destroyed. I should be invested in Tulip and Cassidy spinning out of control and Herr Starr’s plan to replace God. Instead, I find myself rolling my eyes a lot and hoping for the show to find some traction. Or maybe, I’m rolling my eyes a lot in the hopes that the show will find its footing and show me why I enjoyed it in the first place. With only two episodes left, much like Jesse’s ability to track down God, I’m starting to doubt that they can do it.