After a couple of lack luster episodes, it seems that Preacher has refound its footing with only six episodes left in the season, and a lot of it had to do with the Saint of Killers last week and the introduction of Herr Starr this week. We still don’t know a whole lot about this guy but all I know is that I want more of him. From the moment he stepped on screen in his pristine white suit in Vietnam, to deal with the floating pig problem, all the way to the final scene where he had dispatched of the issue by killing everyone, pig included, Starr demanded your attention and was a breath of weird funky air in a show that is filled with weird funky air. I love how the show has recognized the loss of the Saint of Killers, for now anyway as I don’t suspect the bottom of a swamp being the end of him, and replaced him with a villain that is just as intimidating but kind of the polar opposite. Starr seems to be more calculated and even calm within the ridiculousness of his behavior whereas the Saint was more shoot ’em up as a first approach. Jesse and company need a force to contend with and Herr Starr looks to fill that void.

So, who is this guy? I’m not entirely sure really. He’s German. He has a military background. Both of his nipples are pierced and he has unorthodox ways of distracting someone who is trying to fight him. Granted, he took no pleasure in his technique, I wasn’t sure if I should laugh or be horrified by his actions. I settled on a “chorkle” which I guess is like a gasp/laugh combo. I also loved his seducing methods. My man’s got game. Seriously, I’m pretty sure this guy is evil but I think he’s my favorite thing to happen to the show since the whole highway patrol/Saint of Killers shoot out from the premiere.

We watched as Starr rose the ranks of Grail, one of those secret religious societies that Jesse was telling Cassidy about… no, not the lizard people one. It was nice to get a grasp on just what the Grail is while also keeping them shrouded in a little mystery. This episode didn’t give away the farm so to speak but definitely enticed us to learn more about the Grail, but is it me or does it seem that they weren’t prepared for someone of Starr’s… ambition? The training was cake for him and all it took was one meeting with the leader before he effortlessly, almost casually, pushed him over a balcony to seize control. Maybe under Starr’s leadership they’ve become more of a force.

It seems like a group of like-minded militia people, also searching for God, could be all it takes to break up our merry band of travelers. As of right now, everyone seems to be hanging by a thread and the search for the big man is definitely taking its toll. It seems that the most fragile member of the group right now is Tulip as she hasn’t recovered from her encounter with the Saint of Killers. I think him physically laying his hands on her has something to do with that and the fact that Jesse almost didn’t make it in time to save her. In fact, Tulip makes sure to remind Jesse that if it wasn’t for Cassidy she’d be dead. Which also complicates things as there seems to be something brewing again between those two. Her new possible hobby of thrill seeking death like scenarios is something that needs to be monitored, and I wonder as the season goes on if she’ll slip further and further in this wanting to die delirium. The tea scene nightmare was one of the best filmed moments of the episode and felt right out of a horror movie. I appreciate little things like that. Especially when the score is cut and the scene seems more intense because of it. I would like to see Preacher do more of this.

As for our other characters, well, Cassidy is dealing with vampire problems as his estranged son is dying and asking for immortal life. I really have enjoyed this story line as it adds another layer to Cassidy and makes him more of an actual character opposed to a comedic tool. I wonder with the encounter with the Saint of Killers and wanting to be a better father if Cass will actually go through with it. I get the feeling he views being a vampire as a curse and wouldn’t wish that on his son. I’m also curious to who the mother could be… the morgue gag was classic by the way. 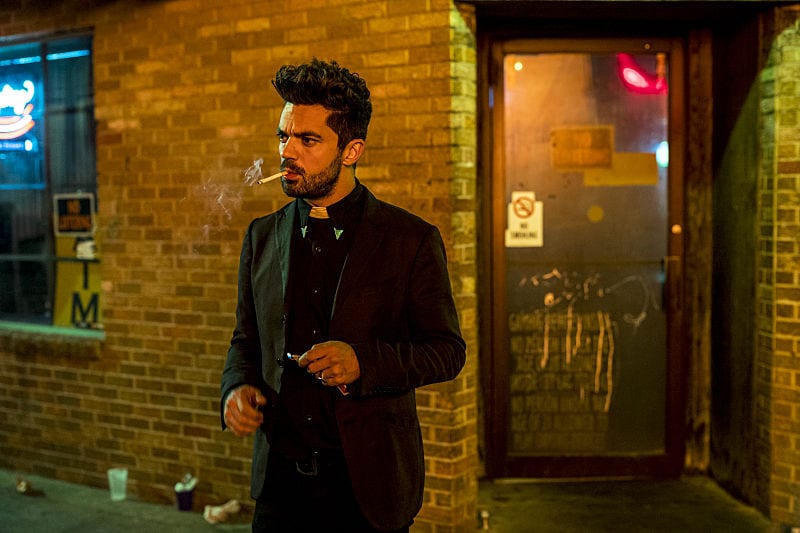 Jesse on the other hand just seems lost. Apparently, they checked the last jazz club in New Orleans only to find no God, I’m sticking to my theory that he’s the guy in the dog mask from earlier in the season, now Jesse is re-watching that audition tape and talking to street preachers who are predicting the end of the world. He’s become detached from the others, it’s a slow burn thing but you can tell in the way he communicates with them or doesn’t, that he’s losing them. Plus he seems to be suspicious of Cassidy and Tulip now something that might have been off his radar up until last night. I’m sure losing, or giving up, a part of his soul to the Saint of Killers is weighing on him as I can see Jesse thinking that the pursuit of God wouldn’t actually cost him anything. It’s that naive arrogance that really has kept him from being a good preacher. Among other things. I wonder how long before Tulip learns the Saint wasn’t sent back to Hell. I’m sure that’ll go over well. I could see this season ending with our three main characters broke and apart, but I think a lot that depends on if Jesse can get his shiz together.

There you have it Geeklings, what did you think of this week’s Preacher? Do you think of Herr Starr is a solid replacement for the Saint of Killers? Who can stop Tulip’s downward spiral? If you were Cassidy would you give your son what he wished for? What’s the deal with Jesse? Sound off in the comments below. As always if you’d like to talk more one on one about the show you can find me on Twitter @iamgeek32. Until next week everyone!