After two really strong weeks of episodes, it appears that Preacher has slipped back into the “meh” category of this season. Last night’s episode was heavy on the concept of Hell, both physically and mentally, and didn’t really seem to go anywhere. At this point, our characters pursuit for God has completely stalled and I’m not entirely sure if any of them are really into it anymore which is affecting my participation in the story. It certainly felt last night that interest levels were seriously lacking. On top of that, last night’s episode spent the majority of time in Hell (physically) and I found it to be taxing and leaving me with a feeling of “blegh” inside.

Before we get there let’s cover the most interesting aspect of this episode which was hands down Cassidy’s inner struggle with his dying son. The episode opens in the 1940s shortly after Denis was born, and I immediately wondered if Cassidy was a vampire during this time period. The concept wasn’t explored but it was a thought that ran through my head. We see Cassidy swear to be the best possible father, as he takes a swig of a flask, only to bring us to the present where we have a Cassidy that has been largely absent from Denis’s life, watching his estranged son die. What happened that made Cassidy break his promise? This episode didn’t seem to keen on exploring that but we did see a Cassidy who suffers deeply from his vampirism and struggled with the concept of passing that on to his son. He hit on all the negatives of being a vampire such as the lack of beaches and all your love ones dying while you keep living. None of these concepts are re-inventing the wheel but were delivered with some real emotion and conviction. Hands down Joseph Gilgun was this episode’s MVP.

The ending seemed to hint that he was willing to turn Denis, look at his face get all vampire, but I guess we’ll have to wait for next week to find out.

Elsewhere Tulip and Jesse were like a couple of zombies. Jesse seems to be quickly losing interest in his pursuit of God because he’s hit dead ends and doesn’t know where to look. This isn’t just a metaphor for his faith but also his character. Jesse isn’t used to committing to things long term. If it’s not easy then he tends not to hang around too long. Using the computer nerds to see if they can find any clues in the audition video was kind of a grasping at straws move on his part. As was his empty prayer to a God he knows that isn’t there. I had a feeling that Jesse thought that giving up 1% of his soul meant he was making the ultimate sacrifice which just makes his entire pursuit of God so disingenuous. I’m not even sure he knows why he’s searching for Him.

Tulip continues to be disconnected not only from life but the rest of the group. She tags along with Jesse to get out of the apartment and get a new fridge. She only half listens to Cassidy’s vampire sob story and is more focused on fixing bullet holes in walls and inviting people to the Hurt Locker to get shot while wearing a bullet proof vest. Sounds like a great time! It seems that her fog and disconnect from life is preventing her from seeing the fact that their new neighbor is working undercover for The Grail. You might recognize her as the jazz season from earlier in the season. Tulip just saw her as someone to get shot with. 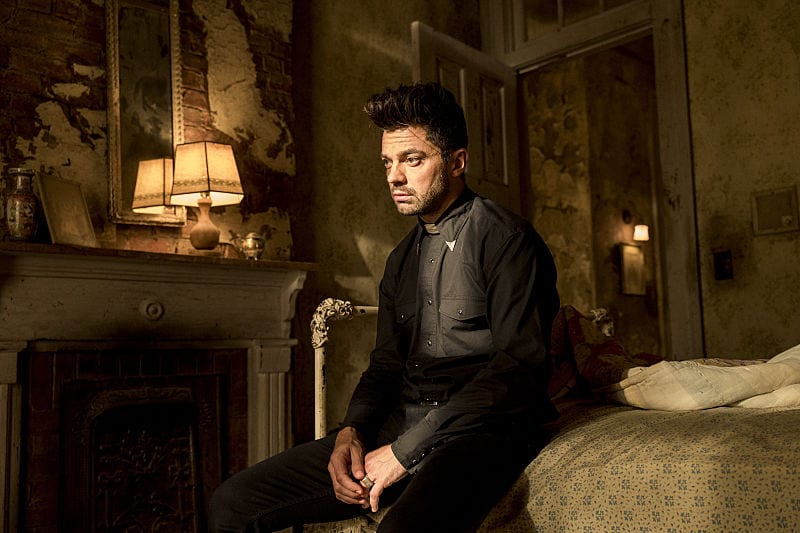 Then there’s Hell, where Eugene is part of the “it” crowd sporting a brand new shoulder tattoo and muscular body tone. He’s joined by the douche kid from 13 Reasons who seems to be in Hell for his crimes on that show while also wearing the same type of clothing. I liked this subtle nod to this creep, I’m a sucker for shared universes, but that’s really where my enjoyment of the Hell setting ends. That was a weird sentence to write but seriously though. Eugene having to act bad in order to fit in is slightly heartbreaking because the kid was so loveable, and I have a tough time watching Hitler on screen. I don’t feel sympathetic for him at all and I’m starting to believe that his end game is to use/manipulate Eugene in order to take over Hell. If there’s any one who could over throw Satan I suppose it’s Hitler. Another sentence I never thought I’d write.

Eugene’s vision in the hole was also really unnerving but not because of the suffering it induced but because of the subject matter. I liked how this vision displays Eugene’s vision of God as Jesse but I could have done without everything else. The creepy make out session and, umm, other activities seemed a bit unnecessary. I get it Preacher, this is Hell and things are awful, but watching Jesse get down with a sixteen-year-old was a bit much. Dominic Cooper’s acting also portrayed that he wasn’t really buying into the scene. His body language was rigid and too standoffish for the emotions it was trying to convey.

The one thing I did like about the Hell aspect of this episode was when Eugene looked up from bed and it appeared that there were other layers to Hell, something Hitler was alluding to (places they don’t let them see). It just felt like a Dante shout out.

There you have it Geeklings, this week’s Preacher failed to live up to the standards of previous weeks and has me wondering if our characters are just going to be spinning their tires for awhile. The show needs an injection of Herr Starr immediately. What did you guys think of this week? Do you think Cassidy turned his son? Will Hell find out Eugene is the good one who doesn’t belong? Can Tulip be saved? Does Jesse even want to find God anymore? Sound off in the comments below and as always you can find me Twitter @iamgeek32 if you’d like to continue any more discussions. See you all next week!