Geeklings, after last week’s double episode premiere, Preacher settles back into its one episode per week swing and I for one am thankful. I don’t think I could handle that much crazy every week. The second season of Preacher started off all types of bonkers (that’s right, I’m trying to bring it back) and this week the pursuit of God takes us to New Orleans because sure, nothing could possibly go wrong with these three in that city. Nothing at all.

Yet, there are already things going a bit awry. For starters, it appears that before returning to Jesse that Tulip left a wake of pissed off individuals behind her. We got our first glimpse of that last week with the gigantic man who couldn’t find cell service but was still able to hand out a beating. Somehow I don’t see Verizon using him as a spokesperson. “Can you hear me now or should I continue slamming you into the wall?” Lucky for us Tulip is a certified badass and was able to survive with the help of everyone’s favorite Irish vampire, Cassidy.  But something tells me that this plot thread is just getting started. If the trailer is any indication then it appears that Tulip is a bit nervous about being in New Orleans. Could this be the base of operations for whoever is after her?

As for Jesse, after his conversation with Fiore, he now knows that using his Genesis’ voice alerts the Saint of Killers to his location. This should lead to a ton of problems as it seems that Jesse has forgotten how to actually talk to people when he needs information and relies heavily on his space demon super powers. It’ll be interesting seeing him revert back to having to actually relate with people. I mean, God forbid you have a conversation. If you recall last week when things got tough with the strip club owner his first instinct was to use the demon voice, luckily Tulip has been around to keep him in check, but I wonder if she knows about this new development. There’s no way that she would let Jesse use the voice if she knew what it attracted.

Looks like they’ll have to get answers the good old fashion way. Talking or threatening them with a vampire. 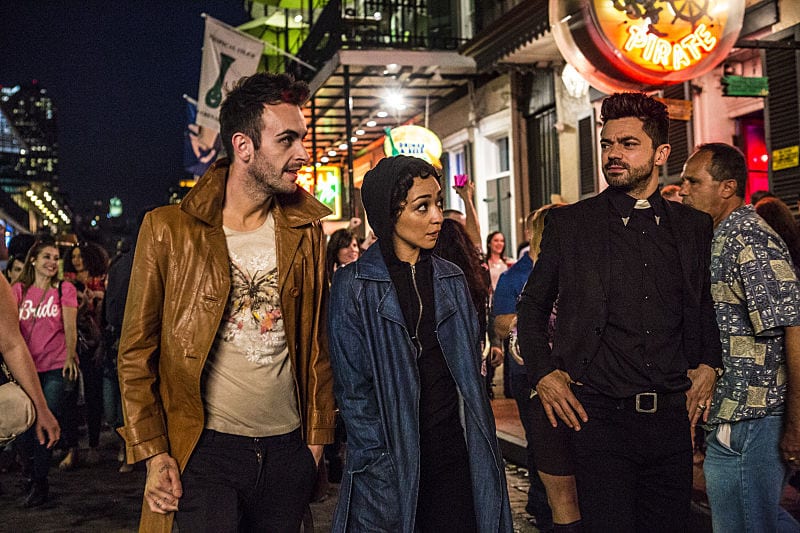 Finally, if the trailer is any indication, it looks like we’re going to get our first real look at Eugene since Preacher sent him to Hell, literally, last season. While I know that Eugene’s actions before his face got all assy were awful, it doesn’t mean that I wish the kid would spend an eternity in Hell. It seemed that he was the only character that was actively working on redeeming himself until Jesse couldn’t handle the truth bombs he was dropping. We saw with the Saint of Killers that Hell was repeating the worst day of his life over and over again. You know, like Groundhogs Day but with fewer laughs and more shooting. I’ll be curious to what Eugene’s version of Hell is like.

Also, who are those dudes in the creepy white outfits? I care not for them as they creep me out.

There you have it Geeklings. A new episode of Preacher for your eyeholes as Independence Day looms on the horizon. Time to turn it over to you now. What do you expect to see on this weeks episode? Who is hunting Tulip? Can Jesse resist using his demon voice? What is Hell like for Eugene? Sound off in the comments below. As always if you’d like to continue talking Preacher or anything else really, you can find me on Twitter @iamgeek32. See everyone tomorrow with the review!